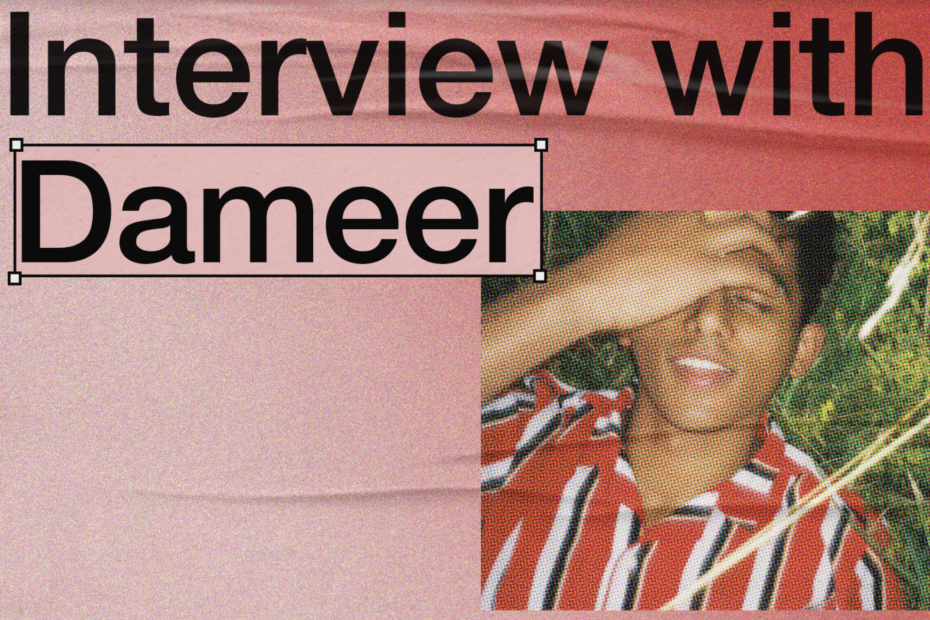 Dameer is a newly-independent Bangladeshi indie-pop musician studying at McGill University. His debut EP, For We Are Distant (2021), was released under the label Majestic Casual. On March 2, he independently released his first song fully in Bangla, “Bashbo Bhalo.”

It was a Thursday night when we met Dameer at Else’s. He gave us both a hug as we stood among the snow, briefly chatting before turning our attention to the queue outside the door. We decided to head elsewhere, and a walk down St. Laurent brought us to a cozy pub on Prince-Arthur. We were seated at a table next to a club’s trivia night, which became a running joke throughout the evening… “I feel like this is what my parents think I do on a weekend,” he joked.

The McGill Daily (MD): What kind of music do you listen to? Let’s start with that.

So I was reading a Charles Bukowski poem, and he was talking about something along the lines of using knives as a metaphor for trauma. He was like, “this knife was stuck into me in 1971 when this girl got me, this knife was stabbed into me in 1953 when my mother did whatever to me.” I thought that was really fun. So then I wrote the line “Stick your steely knives from 1985.” My song is about familial generational trauma – my mom, who grew up in a very abusive household, had knives stuck into her in 1985 when she was a kid, and she took them out and stuck them into me. And that’s how trauma moves from generation to generation.

So sometimes it starts with a word, and then I’m really inspired by that, and a whole song will come out of that. Sometimes it’s a tune. Sometimes I hum a melody in my head or I find a riff on my guitar. And once you get good enough at music, melody starts to sound like words. Certain consonants and certain syllables and certain words will fall perfectly. You develop a sort of instinct of translating melodies into words and seeing what works.

MD: How long have you been playing music?

DK: I come from a very musical family. My father’s a musician; he [and his brother are] in a very famous band in Bangladesh, Renaissance. My dad put me in guitar classes when I was nine or ten, I think. I started producing around 14 or 15, started uploading stuff around 15, 16, 17. And at 18 I got my record deal.

I grew up in Bangladesh, and in 2017 I moved to Malaysia. I lived in Malaysia for four years, and then I lived in Ghana for a few months. The Bangladeshi music industry is very underdeveloped, so I knew I would never be able to make it just from Bangladesh. It’s changing now, but it felt like that when I was a kid. So as soon as I started gaining some confidence in my production, I would send it to big YouTube channels, labels, music blogs, and stuff like that. I would send them as little Hail Marys. I just kept sending them and years passed by and one of them finally replied. And that’s the company that eventually signed me.

MD: We saw on your Instagram that you recently left your label. Why did you decide to go indie?

DK: The label setting didn’t work for me. It took a really long time to put out my first EP, For We Are Distant. They were lovely people, though, and taught me everything I know about the music industry. It was a great stepping stone; I think if you’re a young artist, there’s nothing wrong with getting that initial deal to get your first project out. So you get good quality studio sessions, photoshoots, music videos and stuff like that. It’s a good first step to take. Then when you gain your control, you can always go indie. It’s never been easier to go indie.

MD: Why do you say that, that it’s never been easier to go indie?

DK: The music industry as we know it really sort of starts in the ’50s. And the thing about music contracts – and I have a feeling contracts in any creative field – is that they don’t stay up to date with current events. The contracts artists get when signed to a label are often quite archaic. They’re templates from contracts that were written decades ago. Slowly, slowly things change and things get added. Like, when MP3’s first came along, you started having MP3 clauses. When streaming first came along, you had piracy clauses and download clauses. When CDs started going away, you had less words about physical sales. But they lag behind significantly. So labels would give you a deal, let’s say you get 15 per cent? Fifteen per cent to 20 per cent is an average deal these days for an artist. But back then, you had to pay for shipping of your vinyls, for vinyl pressing, for various distribution, you had to pay each vinyl store the specific rights to sell your product. There are various other costs and certain things used to cost a lot more.

But as the world has digitized and the music industry has developed, labels have lesser overhead and lesser costs. Most labels don’t even press vinyl anymore, it’s all online. You just need to upload something, pay the distributor to plug it to Spotify playlists. How that works is that you have artists, you have labels and you have the streaming companies, but there’s a middleman between the streaming companies, and those are distributors. So most of the major labels have in-house distribution. If you go to a smaller label, chances are they work with an independent distributor, the biggest of which is called The Orchard. That’s who I work with right now, and who I used to work with when I was with my label.

So to this day, labels don’t have the cost they used to, but they’re still going to hand you a contract that’s similar to what they used to be in the 80’s. They’re handing you an archaic contract, but the situation is different.

But today we have SoundCloud. Today we have Distro Kid. You don’t need to pay a distributor anymore, you can pay through Distro Kid and anybody can upload to Spotify. You get people blowing up on TikTok all the time now. My manager has a distribution deal with The Orchard, so I don’t need a label to send to [them], I can send them myself because [they are] an independent distributor that allows anybody to set up deals with them.

Imagine, I grew up in Bangladesh and my label was based in Berlin. I love them, but they’re all white boys. If I’m indie, I could construct my own POC team full of people from parts of the world that understand what I went through and understand my worldview and my lived experience. So that’s how the music industry is changing, and it’s great. I’m all for it. This is the golden age for music, or is at least on a precipice of being a true golden age I think.

MD: Tell us about your new song, “Bashbo Bhalo.”

DK: It’s my first independent release, and my first song in full Bangla, my native language. It’s a song I’m super, super proud of. It’s a story about an old man who’s just lost his wife. He’s at the end of his life and he’s been married to her for so long, that now that she’s not in his life anymore, he’s in a limbo. He’s confronting matters of death and existentialism and love. But it’s not a longing for death, it’s more like, “I can’t wait to be with you again, so when death comes rapping on my door, I would take him in with open arms because the only thing that matters to me is to be with you.” This was written during a time when a lot of elder relatives were passing away from [COVID-19] in Bangladesh, and it just made me think, like, “what happens when you lose someone that you love so much and what happens when both of you get sick with COVID and one of you passes before the other and you’re like, is it coming for me, too, maybe I kind of hope it’s coming for me because I’m in pain.” So, it’s about “one day I’m going to hear the tune of your voice again,” and stuff like that. It’s an optimistic song in the end.

MD: How do you incorporate language into your music?

DK: In my EP, I had seven songs; all of them were in English except “Amaar Jaan,” which was mostly in English, only the chorus was in Bangla. “Amaar Jaan” didn’t do the best streaming wise, but it sure did the best cultural impact wise in Bangladesh. That’s the song that put me on the map in Dhaka. [In the Dhaka scene,] that’s the song that everyone really got to know me through. And it’s [definitely] my most popular song in Dhaka. I did my first ever live show this winter and that was my last song, and it was electric. Everybody knew every word; it was crazy.

MD: How have the places you’ve lived influenced your creative process?

DK: Wherever I go, I try to absorb as much of the artistic culture I can –  not just musical, but film and art and dance. I really want to be a multidisciplinary artist.

When I went to Malaysia, I was introduced to so much Chinese music, Japanese music, Korean music, Thai music, Cambodian music, Indonesian music, Sri Lankan music, all sorts of cool shit. And then when I went to Ghana, that was awesome because it opened me up to the music of Africa. I’m primarily a guitarist, I’d say; some of the traditional folk guitarists from Mali are so interesting, they play the guitar in a completely different way, with different tunings and stuff. The desert rock that’s coming out of the sub-Saharan area of Africa, like Niger and Chad. There’s a band called Mdou Moctaur, which is a band from Niger, they’re absolutely awesome. They make desert rock. Then I got introduced to people like Tony Allen and Fela Kuti, who are like the fathers of Afrobeat. And then you get more into reggae, modern African hip hop, African trap, African drill and African folk music. It’s been absolutely wonderful. I try to just take in as much as I can. I’ve been to the UK a lot too, I love UK music so much. Listen, this is like my world. I surround myself with as much music as I can 24/7.

This interview has been edited for clarity and brevity.