The jumps are not always clean, and neither is the sport 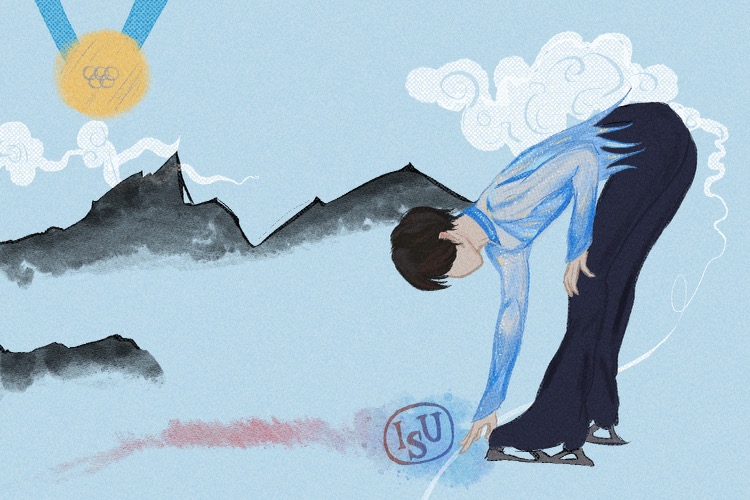 At the 2022 Winter Olympic Games in Beijing, many figure skating victories have been soured by controversies surrounding doping by athletes representing the Russian Olympic Committee (ROC) and discussions of fairness within the scoring system. Skaters and fans alike have been disillusioned with the state of the sport as technical achievements seem to be superseding artistry and actual enjoyment.

Including a historic quadruple Axel attempt from Japan’s Hanyu Yuzuru, a total of 49 quadruple jumps were attempted on February 10 by the 24 men who qualified for the final free skate event. This marks the Beijing Olympics as the height of what has been referred to as the “quad revolution,” a frenzy of technically-oriented advancements that has characterized trends within the sport over the past decade. Only 12 years ago, in the 2010 Vancouver Games, 11 quads were attempted in the men’s event, only three of which were awarded positive grades of execution (GOE). In the four years between the Pyeongchang and Beijing games, the quad revolution has spread from the men’s discipline to the women’s. In the women’s free skate on February 17, the three girls representing the ROC attempted ten quads between them; another five girls attempted triple Axels, making for a total of 15 exceptionally difficult jumps – known colloquially as “ultra-C elements”. The appeal of these ultra-C elements is in their high value as technical elements, with base values ranging from 9.50 to 11.50 points; when completed successfully, a single jumping pass can be worth over 20 points.

The quad revolution has resulted in a “seismic shift” within the discipline, widening the gap between the weight given to technicality and artistry in scoring. While the average base technical value has skyrocketed thanks to the increased frequency of quads, the program components scoring system has remained the same. The two supposedly separate aspects that constitute scoring in figure skating have never been this dichotomized, and many have expressed concerns that a preference for quads is alienating the sport from its artistic side. As this year’s Olympics have progressed, it has become clear that the consequences extend far beyond the decline of artistry. Existing problems such as athlete safety, fairness and equity within the sport and its scoring system, and institutional abuse of underage athletes by their coaching teams are far exacerbated by the increasing fixation on ultra-C elements, culminating in the bittersweet and tragic events this year’s women’s singles events have witnessed.

The scoring system in figure skating is divided into two scores: one for technical elements and another for program components. The designated technical panel notes the technical elements as they are performed by the skater to assign the appropriate base value for each element. Among other responsibilities, the technical panel examines the elements and decides whether they meet International Skating Union (ISU) requirements; for example, full base value can only be awarded to jumps if they are fully rotated. Meanwhile, nine ISU certified judges on the judging panel award each element with a GOE mark, ranging from -5 to +5. Discarding the lowest and highest values, the remaining seven GOE marks are averaged according to the ISU’s scale of values for the total score of the element.

While the technical element scores can be broken down into the specific elements, program component scores are meant to reflect the quality of performance throughout the program. Program component scoring is divided into five areas – skating skills, transitions, performance, composition, and interpretation –, each graded on a scale of 1 to 10 by the judging panel in 0.25 point increments, before being averaged for an overall component score, in the same manner as GOE marks for individual elements. The latter three of these categories are, by design, largely subjective aesthetic judgments. Performance marks are awarded for the skaters’ perceived emotional and physical engagement with the program and presentation to the audience. Composition refers to the arrangement and distribution of elements within the program, while interpretation scores reflect the musicality of the program.

The perceived dichotomy between technical excellence and artistry is due in part to the division of the scoring system. While there are clear guidelines for awarding positive or negative GOE according to the technical guidelines of the elements, the criteria for program component scores remain nebulous. It is unclear, for example, what differentiates an 8.25 program component score from an 8.50 score, as scoring is mostly entrusted to the judges’ experience and discretion. Even the more easily quantifiable components, such as skating skills and transitions – referring respectively to the speed and edge quality of skating, as well as to the complexity of the choreography between technical elements –, are lacking in clarity and specificity.

While the technical and performance scores are supposed to balance one another, failure to standardize program component scoring gives more weight to technical element scores. Most skaters thus benefit more from focusing on heavier-weighted, more technically demanding elements such as quads rather than on artistic expression, or even other lower-scored elements like step sequences, choreographic sequences, and spins. In the past few Olympics, it has become clear that this is especially the case for skaters who represent a domestic federation with more political power in the ISU.

Flaws within the scoring system: national bias and subjectivity

The figure skating judging system has long been the subject of criticism for its overt national bias and subjectivity. In the 2014 Sochi Olympics, Russian figure skater Adelina Sotnikova’s victory over defending champion Kim Yuna of South Korea was the focus of public outcry when Sotnikova was seen embracing a Russian judge on the panel after her performance. Scoring is a site of institutional power within the sport; while most judges have been found to favour skaters from their own country, judges from domestic federations with more political power in the ISU (such as the Figure Skating Federation of Russia and the United States Figure Skating Association) tend to do so more easily than their counterparts from other federations. During the Pyeongchang Olympics, Chinese judges Huang Feng and Chen Weiguang were temporarily suspended for nationalistic bias; American Lorrie Parker, notably, was not.

While individual judges are investigated and punished for perceived bias, the flaws within the scoring system themselves remain easily exploitable by politically powerful federations. At the Olympics, where judges have to evaluate 24 to 30 skaters in succession, it is extremely difficult to maintain a consistent standard of judging even throughout the same event. Especially considering that the same judges are responsible for paying close attention to the execution of each individual element, it is almost unrealistic to expect them to be closely evaluating the overall level of performance throughout each program in order to fairly award program component scores. Furthermore, judges are mainly selected on a “volunteer” basis. In exchange for judging some of the field’s most prestigious competitions, they are offered a per diem of typically less than $100. While their expenses for the trip tend to be covered, “many [actually] lose money because they have to take vacation from their day jobs.” It is therefore not a surprise that judges can be easily swayed by the money and politics within domestic federations or the international field; the 2002 judge bribing scandal is only one publicized example of the easily exploitable flaws in the ISU judging system.

Athlete safety and the future of figure skating

While neither a technically-oriented layout nor the support of a powerful domestic federation is enough to skew the results of the sport on their own, they are enough to threaten the credibility and integrity of figure skating. The case of the ongoing ladies’ event, especially amidst controversies concerning 15-year-old Kamila Valieva of the ROC’s testing positive for a banned heart medication after her participation in the team event, calls into question not only the fairness of the sport but the safety of athletes and the toll that the pursuit of technical excellence takes on their bodies. Valieva’s positive doping test and the ensuing leniency of the ruling by the Court of Arbitration for Sport (CAS) which allowed her to participate in the individual event are testaments to the failure of the figure skating community not only to protect underage athletes in abusive relationships with their coaching teams but to allow other competitors to push themselves to injury – and, in the worst cases, early retirement – trying to compete with athletes who skate with the backing of powerful domestic federations.

Like the failures of the scoring system, this cannot be seen as the fault of individual athletes or judges. Valieva, who finished in fourth place after an error-riddled program in Thursday’s free skate, is coached by Eteri Tutberidze, along with the ROC’s two other representatives – gold medalist Anna Scherbachova and silver medalist Alexandra Trusova, both 17 years of age. Tutberidze, who was awarded Coach of the Year at the ISU Skating Awards in 2020, is known for her demanding and harsh training conditions. While her methods consistently produce athletes who dominate the discipline – team gold medalist Yulia Lipnitskaia in 2014; individual gold and silver medalists Alina Zagitova and Evgenia Medvedeva in 2018; and Scherbachova, Trusova, and Valieva in 2022 –, her students are rarely able to sustain their success for more than a few competitive seasons.

Under Tutberidze’s tutelage, Trusova, known as the “quad queen,” landed her first quadruple jumps in competition in 2018, becoming the second woman to do so at only 13 years of age – the first in 15 years since Ando Miki’s historical first quadruple Salchow in 2002. A short four years later, Tutberidze was at the forefront of the technically demanding quad revolution in women’s figure skating. Of the 18 women who have ratified quads since Trusova as of January 2022, seven have been Tutberidze’s students, the youngest among them doing so at 12 years of age. Once they reach their “Eteri expiration date” of around 17 years, Tutberidze’s students’ struggles with eating disorders and career-ending injuries make it impossible for them to continue in competition. Liptnitskaia retired in 2017, at the age of 19, while neither Zagitova nor Medvedeva have been able to compete since 2019, when they were 17 and 19 years old. The suspected use of the banned drug trimetazidine found in Valieva’s system is weight control through diuretics.

Officially considered a legally “protected person” at 15 years of age, Valieva was deemed by CAS still eligible to compete, with the caveat that the medal and flower ceremonies would be cancelled if she were to make it to the podium. Tutberidze’s methods have long been an open secret within the sport, and Russian athletes have a long history of systemic doping; a formal investigation of Eteri Tutberidze’s coaching team has yet to be carried out, and a child will likely bear the brunt of the blame for enduring brutal methods of the coaching team supposedly responsible for her athletic safety.

At just 15 years of age, Valieva’s career should only be beginning, but precedent suggests that her tearful performance on February 17 will likely be her last Olympic appearance. Knowing the circumstances and trajectory of the sport, teammates Scherbachova and Trusova were unable to enjoy their success on the podium as well, a miserable conclusion to an event characterized by fear and uncertainty. The quad revolution has often been praised for pushing the sport forward, but it bears questioning whether this evolution is worth continually sacrificing the integrity of sport, not to mention the safety and longevity of athletes’ careers. Though International Olympic Committee (IOC) president Thomas Bach noted the behaviour of Tutberidze and the rest of Valieva’s entourage as “chilling” and “disturbing,” the IOC has yet to take significant action regarding the CAS ruling. Whether figure skating has a healthy future will be determined by the national and international bodies that govern it. These must decide whether they will endeavour to address the rampant corruption that continually reproduces institutional abuse and “irreparable harm” within the sport.