Montreal’s Chinatown: What Does It Mean to Say That “The Work Isn’t Over”?

Heritage designation is really small, and the government must reflect on what to do next. 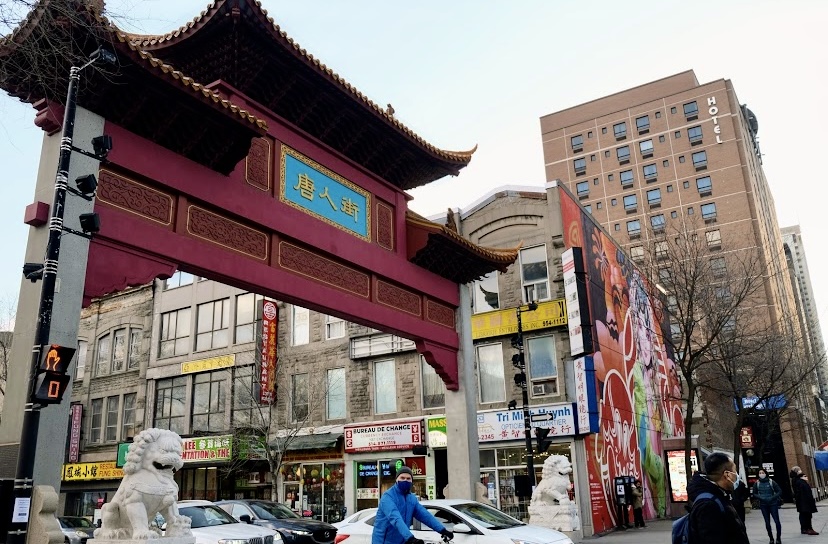 What is left unprotected?

On January 20, Quebec Minister of Culture and Communications Nathalie Roy signed a notice of intent to grant heritage status to the “institutional core” of Chinatown, a sector from rue St. Urbain to rue Jeanne-Mance connected by rue de la Gauchetière. The new Noyau-Institutionnel-du-Quartier-Chinois heritage site will protect some of Chinatown’s best-known buildings, like Wing Noodle Factory, the Chinese Family Services of Greater Montreal, and the Sakura Gardens.

Gentrification and urban planning have eaten away at Chinatown since the 1960s, threatening to engulf the entire neighbourhood. Urban planners have already taken to buying sweeping chunks of land. Advocates are anxious that these buildings will be future construction sites for high-rise condominiums – raising rent prices and choking out local Chinese residents and small businesses. The heritage site designation intends to guard against this gentrification by mandating that property owners in Chinatown must now obtain permission from the provincial government before making any alterations or demolitions to property. Owners of heritage buildings are additionally obliged to keep their property in good condition.

But the work is not over. The limitations of Chinatown’s heritage status are evident upon inspection of the size of the protected area. Unlike the heritage territories of Vieux-Montréal and Mont Royal, the Noyau-Institutionnel-du-Quartier-Chinois heritage site only makes up a fraction of the district. It excludes the majority of Chinese-owned businesses located in the three blocks north of the heritage designation. This means that under the current situation, the commercial area surrounding Chinatown’s iconic red and gold paifang gates will remain unprotected.

Quebec decided against granting heritage status to the entirety of Chinatown due to the urgency of intervening. According to Minister Roy, “Declared sites require 13 to 15 years of preparation. We needed to act quickly.” In the interim, the Plante administration implemented a by-law, applicable to parts of Chinatown not included in the heritage site, that aims to offer similar municipal restrictions as a provincially-granted heritage site would. Implemented in late January, this urban control by-law limits the height and density of new constructions within Chinatown.

Although declaring all of Chinatown as a heritage site will take significantly longer compared to the Noyau-Institutionnel-du-Quartier-Chinois’ designation, the expectation is nevertheless that Chinatown be protected in its entirety within a reasonable timeframe. Construction and renovation projects are already swallowing up long-running Chinese businesses. The newly constructed Hampton Inn, located centimeters away from the heritage gates, embodies the gentrified real estate that residents of Chinatown have been made victim to. The Hampton Inn and other hotels and condominiums have raised the cost of living, threatening the financial viability for Chinatown locals to live within the area. Much of the damage has already taken its toll, with many Chinese residents in the surrounding community having already lost their homes to forced evictions.

The limits of heritage status

Heritage status offers Chinatown residents protection from property owners, but the limits of its protection are bound by its borders. Many people who work in Chinatown live outside the protected area. Therefore, it is imperative to avoid viewing the process of re-invigorating Montreal’s Chinatown through a prism where heritage status directly leads to the revitalization of the district. Even if heritage status was granted to all of Chinatown, there is a risk that gentrification efforts outside the heritage site will force people out of their homes – rendering the district a place for Chinese businesses, but not Chinese residents.

Chinatown’s living neighbourhood is the intrinsic factor that provides its commercial area the cultural richness that the heritage status effort aims to protect. Much of the debate regarding where to place Chinatown’s heritage site centres around its commercial hub. However, it is important to keep in mind that protecting the community’s Chinese businesses is ultimately a means to protect its people. As such, municipal real estate regulations that help Chinatown residents directly must be adopted. Policies such as mandatory consultation with businesses on development projects and the establishment of a rent and wage subsidy registry for Chinatown’s small businesses should be adopted in addition to the heritage site in order to prevent local residents from being pushed out of their homes.

The heritage designation to Chinatown’s core is both a monumental achievement for the community and a positive sign of commitment from the municipal government. However, it is one piece in the long process to prop up the community and protect its residents. It leaves room for the government to reflect upon potential policies that may help in areas where a heritage site may not – and for independent advocates to hold them accountable to it.