The Recipe for A Queer Cookbook 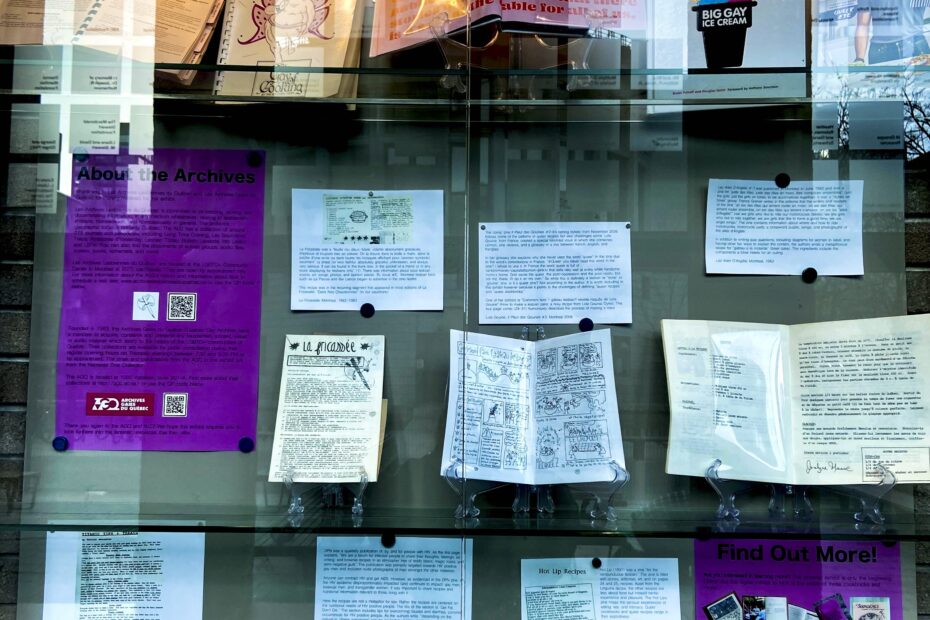 What defines a queer cookbook? What is the history of queer communities and food? These are some of the important questions asked in “What’s the Recipe for a Queer Cookbook,” an exhibit curated by Dr. Alex Ketchum with help from Jacqueline Tam, Les Archives Gaies du Québec, and Les Archives Lesbiennes du Québec. This exhibit is on display in McGill’s Leacock building until December and a digitized copy is also available online.

Dr. Ketchum has been a faculty lecturer at the Institute for Gender, Sexuality, and Feminist Studies since 2018 and her research focuses on food, gender, queerness, lesbian identity, and feminist identity. She also has an upcoming book on the history of lesbian feminist restaurants in the United States. As the ongoing pandemic has made life tough for many people, Dr. Ketchum told the Daily that she wanted to “create this space of joy for my own research.” Many of the cookbooks used come from her personal collection. She also wants to show students that research can be fun and focus on seemingly mundane objects such as cookbooks, as well as the wealth of resources that exist outside of McGill. “I hope it inspires some students to think about taking kind of seemingly mundane objects in our homes or in our lives, and kind of think about what does that tell us? What kind of cultural histories can we learn and stuff like that?” she explains.

Evolving language and attitudes presented some difficulty defining “queer” cookbooks. Dr. Ketchum says that “It’s not really until the early 90s that the word queer gets reclaimed … And so it’s kind of anachronistic to use the word queer sometimes to define something before this period of reclamation.” However, she acknowledges that “queer” is a very useful umbrella term for defining connections between different people. “There’s always limitations when you create a category, it’s never going to fully encompass everyone and everything you’re trying to talk about. But that’s why I think it’s important to pick a term, but also explain why you’re using that term.” she says.

There was often a tension in queer cookbooks stemming from the desire not to fall into stereotypes and challenge the status quo. Dr. Ketchum describes cooking for lesbians as “this domain that women are oftentimes socialized into … it can be a skill, so that can be highly valued, a way to earn money, a way to feel pride, and a way to connect with other people. But at the same time, there can be this feeling that it’s something you’re expected to do. There’s kind of this desire to push away from that.” On the other hand, there’s also the stereotype that lesbians, particularly butch lesbians, aren’t “real” women and therefore can’t cook. In The Butch Cookbook, a collection of recipes submitted by butch women, the authors even joke in the foreword that “when they solicited recipes they were worried they would get ‘30 recipes for boxed mac and cheese.’” The Cincinnati Lesbian Activist Bureau’s 1983 cookbook Whoever Said Dykes Can’t Cook? purposefully plays with these stereotypes. Cookbooks by gay men are often playing with the stereotype of the “the creative gay man with the artistic flair in the kitchen,” in Dr. Ketchum’s words.

Some cookbooks, in particular those from the Bloodroot Collective, incorporated feminism and anti-racism. Dr. Ketchum says that they tried to “counter sexism through feminism, and lesbian identity, and then also environmentalism, and then anti-racism, because so much of it is like connection with the earth and like not hurting the environment.” The people who worked at Bloodroot were ethnically diverse and their cookbooks shared recipes from different cultures. They include feminist and anti-racist quotes from different thinkers, philosophers, poets, writers, and artists to that explicitly addressed these issues. They viewed environmentalism as central to lesbian feminism, so their recipes were vegetarian or vegan and encouraged readers to use local ingredients. The Collective argued for labour rights and collective workplace practices, saying that “we cook as a way to survive economically, yet our cooking is part of our study, our living, and our politics. It seems to us that there is no separation between art and politics; there is integrity, which requires judgments and a value system underlying our work and our lives. Everything we do is the result.”

As with the Bloodroot Collective, many queer cookbooks were intended as community care. The cookbooks were often used for fundraising, allowing the creators to provide financial support to their communities. However, Dr. Ketchum adds that “there’s support in terms of  people writing in and sharing their stories with the recipes, which also gives a sense that you’re not alone and that other people are having these experiences.” She points specifically to Cooking with Honey: What Literary Lesbians Eat by Amy Scholder, telling the Daily that “it’s like a bunch of authors and artists sharing their own stories about the recipes, and how it connects to their own lesbian identity and it shows a variety of experiences within the community. So someone’s story might not resonate for one person and may resonate for another, but it’s not all positive and not all negative.” During the HIV pandemic, which disproportionately affected queer men and trans women, zines and pamphlets were distributed giving practical tips on eating and living with HIV.

Despite the efforts of many queer cookbooks to rebel against the status quo, there are a few in the exhibit that reinforce harmful tropes about other communities. Dr Ketchum says that “overall, I would say that there’s actually been an awareness around, racism, sexism, and classism within most of the cookbooks over time.” She explains that “I still included those cookbooks in the exhibit because they’re a cultural artifact to analyse, but also to kind of see these tensions.”

So what is the recipe for a queer cookbook? Dr. Ketchum hopes that through this exhibit, people will be able answer the question themselves.

Note: For those interested in learning more about this topic, Dr. Ketchum would like them to know that she teaches a class called GSFS 401: Food, Gender, and Environment for which the syllabus is publicly available on her website.