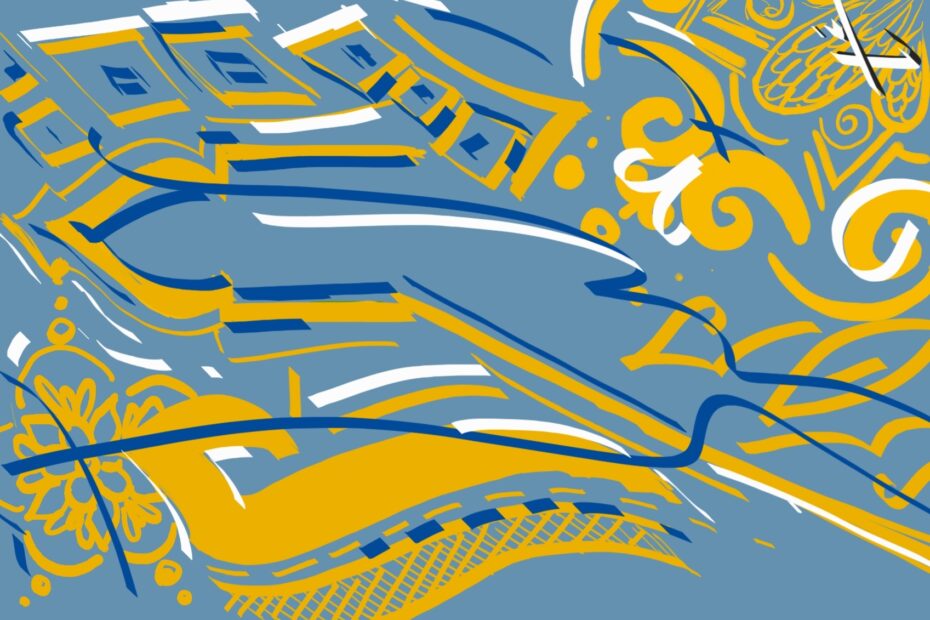 You’ve probably heard that truism: Don’t judge a book by its cover. But in the case of The Good Arabs  it would not be an exercise in futility. Lee Lai designed the cover image and LOKI, the cover design.

The title is embossed in bright bold gold, and part of the image in shades of blue like an old-fashioned cyanotype.  A figure is pushing their hand through the second “O” in “Good” to just slightly touch the first “O”. It’s skillful yet delicate, and its twisting, bending, flexible nature is observable even before you begin reading. Increasingly, there is more space for genre-crossing in poetry collections, and from cover to content The Good Arabs serves as a well-crafted example.

The Good Arabs is an ethnography of the world through El Bechelany-Lynch’s eyes, ears, nose, mouth, hands, and another sense some would label the sixth, palpable in lines like, “The moon’s wink haunting vast desert nights/ The glimmer of sand sparkling in the light cast.

The collection  engages the senses in a visceral way, swinging from the sweet smell of cut-up fruit to garbage on a hot day. Food is mentioned throughout the text, pushing the mind towards taste, scent, and touch all at once. Food can eventually become garbage, another theme in the text. It’s an effective way to engage the natural world, while creating a visceral feeling that writing about the moon or stars alone wouldn’t.

The text paints a portrait of family both biological and chosen.  The Good Arabs explores themes of identity, colonialism, the post 9/11 period, feelings of belonging, what it means to be a visible member of the LGBTQIA2S+ community, joy as resistance, and different forms of love.

The poems offer insight and commentary on the personal and political, ranging from the 2020 Beirut Explosion and its after-effects to exploring the differences and similarities between the judgemental stares of passersby in Canada and Lebanon.

The Good Arabs reads equally like a guided meditation and call to action. You will smile fondly at the description of a pre-teen El Bechelany-Lynch shimmying their hips to Nancy Ajram; adore the cheeky self-reflective nods to millennial culture in lines like, “She is probably smarter than me. It’s hard to admit as a Virgo” and feel angered by the actions of the Israeli government as El Bechelany-Lynch’s thoughts return to it.

Lines like, “Two bodies never fall asleep at the same time,” offer practical advice in a delicate yet firm, poetic way (El Bechelany-Lynch’s Virgo tendencies again?). They conjure up a number of different interlocking images: a couple on the outs in the same bed, a parent and child who fall asleep fitfully without resolving a bitter fight, a dog sadly and confusedly drifting off wondering where their owner is. This speaks to El Bechelany-Lynch’s masterful and clear grasp of language, and the ability to twist and wring out the nuance of a sentence.

It’s a dense read and felt longer than its hundred-or-so pages. But The Good Arabs was long in an enjoyable way, especially when compared to other short poetry collections that can sometimes feel like they’re ending abruptly. The varying forms of text that compose the collection also help to make the length feel fresh, interesting, and engaging as opposed to monotonous and repetitive.

Fans of Fariha Roisin and Billy-Ray Belcourt’s work will probably enjoy El Bechelany-Lynch’s for the lyrical and inventive way otherness, identity, queerness, and what it means to live in a capitalistic, consumerist, society are explored.

The Good Arabs is the sort of book that you won’t regret keeping on your shelf for years to come. Its thoughtful, mutable, quality makes it easy to keep returning to, plus its cover is its own artwork worthy of a bookshelf display.