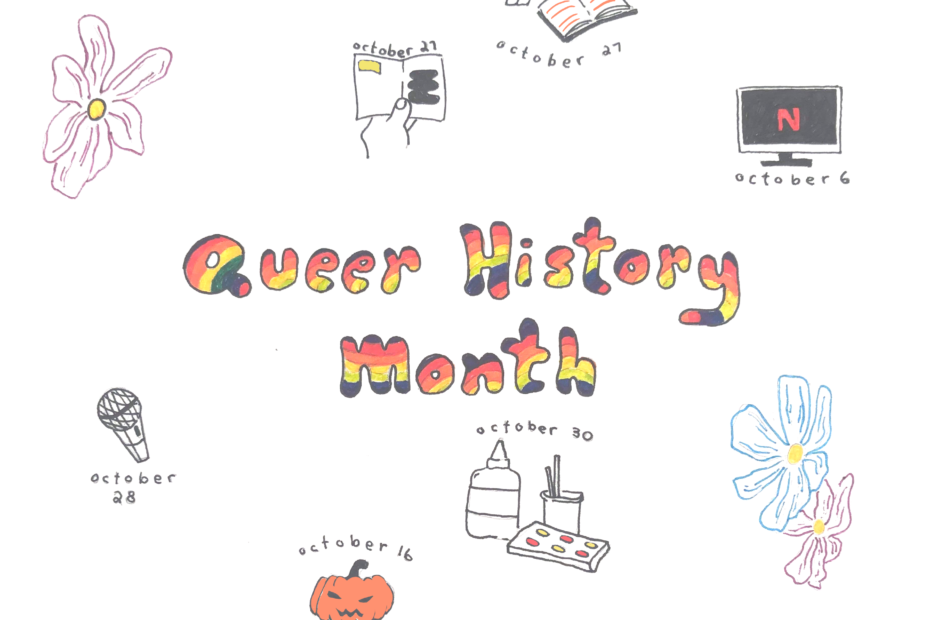 This past month celebrated McGill’s Queer History Month – while students have observed Queer History Month for the past four years, this year was the first to have the month officially recognized by McGill’s Senate. The month is designated to highlight the history and achievements of 2SLGBTIA+ communities at McGill, and throughout Montreal and Canada. This year’s theme was “Coming Together” – hoping to encourage connection and reflection amid easing pandemic restrictions.

From September 29 to October 28, a series of events were hosted aimed at raising awareness, advancing education, and increasing the visibility of 2SLGBTQIA+ communities. The film screenings, panels, workshops, and community events recognized 2SLGBTQIA+ history and contributions, and brought together students, faculty, alumni, and other community members.

This event was held September 23 to celebrate the beginning of Queer History Month in tandem with Indigenous Awareness week. Dillan Chiblow, Anachnid, Pasha Partridge, and Dez Grégoire discussed the future of 2SLGBTQIA+ Indigenous artists’ creative forms of expression, and how they can be used to build community and connection.

On September 27, the Office for Sexual Violence Response, Support and Education (OSVRSE) hosted this workshop for 2SLGBTQIA+ students looking to discuss, share, and unpack the intersections between queerness, identity development, and in-person connections with the McGill community. The workshop was held at the OSVRE office, and was hosted by Wellness Advisor Margot Nossal.

Opening Event: Return of the Rainbow

Official Queer History Month events started September 29, with the “Return of the Rainbow.” The month was opened by Kawennotas Sedalia Fazio, Mohawk Elder and Founder and Director of the first Sweat Lodge in Montreal. The event is McGill’s homecoming for current and past 2SLGBTQIA+ students, staff, and faculty. This celebration was started in 2001, and is an opportunity for queer alumni to return and reconnect with the university and its campus.

This year’s keynote was delivered October 1 by Dr. Jessica L. Ware, an entomologist and curator at the American Museum of Natural History in NYC. She focuses on working with and researching dragonflies, damselflies, cockroaches and termites, along with other insects. In her talk, Ware touched on the complicated history of entomology; while it is a vibrant and exciting science, she said that the discipline is deeply rooted in colonialism. Ware spoke to, however, the many initiatives to diversify and advocate for equity within the field, mentioning groups like 500QueerScientists and Entomologists of Color. The talk ended with spoken word performances by Powetik, a Montreal based spoken word performer, writer, playwright, and community organizer.

“Chat with an Elder”

On October 19, participants were invited to partake in an evening of intergenerational exchange and knowledge led by Two Spirit Elder Blu Waters, member of the Métis Nation of Ontario. Those in attendance were invited to ask questions or seek advice from Elder Blu Waters, whose gifts include giving traditional spirit names, hand drumming, house cleansing, song and creative writing, and providing traditional teachings.

Held on October 21, this workshop introduced participants to classic zine formats. The workshop was led by Jenny Lin, a Montreal-based visual artist, whose work is often interested in queer identity and history. Those who attended the workshop were also shown a selection of Lin’s zines, their format and content widely varying.

Trans and Non-binary in Academia

To be held October 27, this panel will feature one professor and two PhD students discussing their experiences in academia and sharing successes and strategies, followed by a Q&A. This event is a closed space for Trans, nonbinary, and gender non-conforming people.

Queer and allied folks are encouraged to sign up for and attend this open mic event taking place October 28, featuring a performance from Opera Queens, a Montreal and Toronto-based opera company that puts on queer, gender-bending performers and performances. At the end of the evening, invited Elder Sedalia will be closing out Queer History Month.

On November 5, this panel will discuss the sustainability of digitizing archives, the risk of the “digital dark ages,” and the challenge of sunsetting digital humanities projects. Hosted as part of Disrupting Disruptions: the Feminist and Accessible Publishing, Communications, and Technologies Speaker and Workshop Series, it will highlight the particular challenges that Lesbian and queer archives face, as many exist apart from institutions.

Several other community-building events were held over the course of the month, such as a watch party and discussion of the rom-com “Saving Face” on October 6 and a spooky scavenger hunt on October 16. A Halloween crafts and movie night will also be held on October 30, hosted in the Queer McGill office.