The Sins of Dark Academia

A deep-dive into dark academia, Dead Poets Society (1989), and the English literary canon 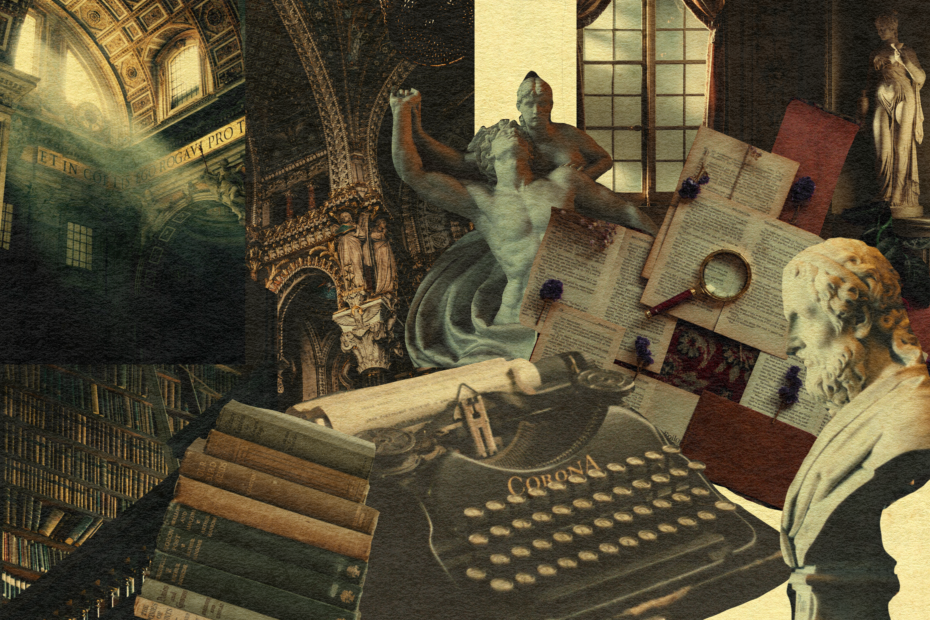 You may have come across posts on Instagram and TikTok of people wearing long coats, dark-coloured sweaters, round glasses, and plaid bottoms. Or perhaps mood boards featuring literary classics – like Homer’s Iliad or Shakespeare’s plays – casually strewn about a dark, wooden desk, adorned with half-melted candles and old typewriters. The dark academia aesthetic has taken social media by storm.

The concept of dark academia emerged in 2015 on Tumblr, originating as a book club where people recommended classic books and gothic novels to each other. The club paid homage to Donna Tartt’s 1992 novel The Secret History, a book which revolves around a group of six classics students who get caught up in “dark” murders and mysteries. The novel glorifies “classics” of the literary canon as superiorly intellectual, mirroring the privileged views of the rich students who discuss and refer back to them throughout the novel. Eventually, this book-club style of dark academia evolved into an aesthetic that spread quickly through current popular social media platforms.

Followers of the trend, however, have since raised concerns over its origins and the ideology it promotes. The aesthetic, largely inspired by Ancient Greek, Roman and Western classical texts, idealizes writing, reading, and intellectualism. The fault lies not with the aesthetic itself, but rather with the message it inherently perpetuates –­ that Western study and classical literature is the epitome of academia.

Most media from which dark academia draws inspiration – films such as Kill Your Darlings and Dead Poets Society, novels such as Ninth House – showcase exclusively rich, white, cis men as the intellectual protagonists. For instance, Dead Poets Society features an all-male cast and is set in all-male, elite prep school. The boys are taught to appreciate canonized poetry by their English teacher’s unorthodox methods. In an article published in The Atlantic, Dr. Dettmar, Professor of English at Pomona College, claims that the film is the “literary equivalent of fandom.” By merely glorifying (white) British and American literary texts, the film is a shallow account of what academia in a university setting looks like. Dettmar notes the several instances where Keating conveniently leaves out important verses from poems like Robert Frost’s “The Road Not Taken” and Walt Whitman’s “O Me! O Life!,” misinterprets their meanings, and places them on a pedestal. Dettmar argues that Keating does not ask his students to question the poems, but instead simply (mis)quotes “the Greats” to serve his over-the-top and slightly unrealistic philosophy of free thinking and “carpe diem.” While the film loosely translates “carpe diem” as “seize the day,” the idea can be traced back to a handful of 18th century English poets – in John Donne’s “The Flea,” for example, the speaker uses overdrawn logic to convince his lover to “seize the day” and sleep with him, despite the lover’s constant refusal. These texts are not analyzed or criticized, but instead romanticized in the film— an issue reflected in dark academia.

I emphasize that dark academia’s aesthetic is not the problem, but its ideology is – the English literary canon is glorified as the master narrative. A set of certain texts, most of which are written by white, male authors, are considered the “authentic” texts that represent English literature, excluding writers of colour, writers from non-Western parts of the world, writers identifying as non-binary, and anyone else who does not fit the Eurocentric ideal of authenticity. Dark academia inspires the reading of these canonized texts. It specifically leaves out works that have not “made it” into the literary canon, not because they are not important, but because they are not considered important.

Dark academia therefore falls in line with the oppressive history of Western institutions, like universitives, which have historically discouraged any dissent against the dominant male, white narratives. Subtly but surely, this aesthetic feeds into the formation of the canon and master narratives. Should one choose to study English Literature, most American universities will offer mandatory, introductory courses which cover mostly British and American literature (like the English Literature department at McGill, which offers few optional choices for non-British literature even after the introductory level). In an analysis of three books from the Norton Anthology of American Literature series published in 2017 – an anthology widely used for students at the introductory level and which forms the basis of students’ understanding of literature – it was found that almost 66.8 per cent of the texts were by men, with zero texts by transgender authors. Further, 66.5 per cent of the texts were by white writers, while the other 33.5 per cent of texts were authored by writers identifying as Black, Indigenous, Asian American, and Hispanic. Postcolonial literature from African countries and India, where the imposition of the English language has resulted in a generation of people growing up speaking and writing in English, is not a required subject of study across high schools and universities – a literature student will be considered “knowledgeable” even without studying these “other” voices. As Ingrid Johnston notes in a study titled “Postcolonial Literature and the Politics of Representation in School Programs,” throughout the 20th century, Western-centric texts have dominated high-school English classes in Canadian schools. It is only now that there is more representation of voices, though even the new system contains gaps.

The aesthetic extends itself to areas other than academia. Fashion, for instance, forms a huge part of it. Pictures of people dressing up the “intellectual way” flood the Instagram hashtag #darkacademia. The “intellectual way,” like the rest of the aesthetic, mirrors a style associated with the English elite; they give the wearer the impression of studying at an Oxbridge university in the early 20th century – plaids, turtleneck sweaters, brown and mossy green clothes. E-commerce stores especially dedicated to selling dark academia clothes highlight the extent to which the “Western” ideal of intellectualism pervades fashion choices, let alone just academia in universities.

But what if we emphasized aesthetics which revolve around other voices – voices other than just those of rich, white, male characters? As Nigerian author Chimamanda Ngozi Adichie once said, “Start the story with the arrows of the Native Americans, and not with the arrival of the British, and you have an entirely different story. Start the story with the failure of the African state, and not with the colonial creation of the African state, and you have an entirely different story.” What we need is a multitude of aesthetics reflecting a multitude of ideologies, rather than one dominant aesthetic which overshadows “others.” We need people expressing their admiration for the myriad of knowledge forms that are out there, rather than the glorification of just the one.