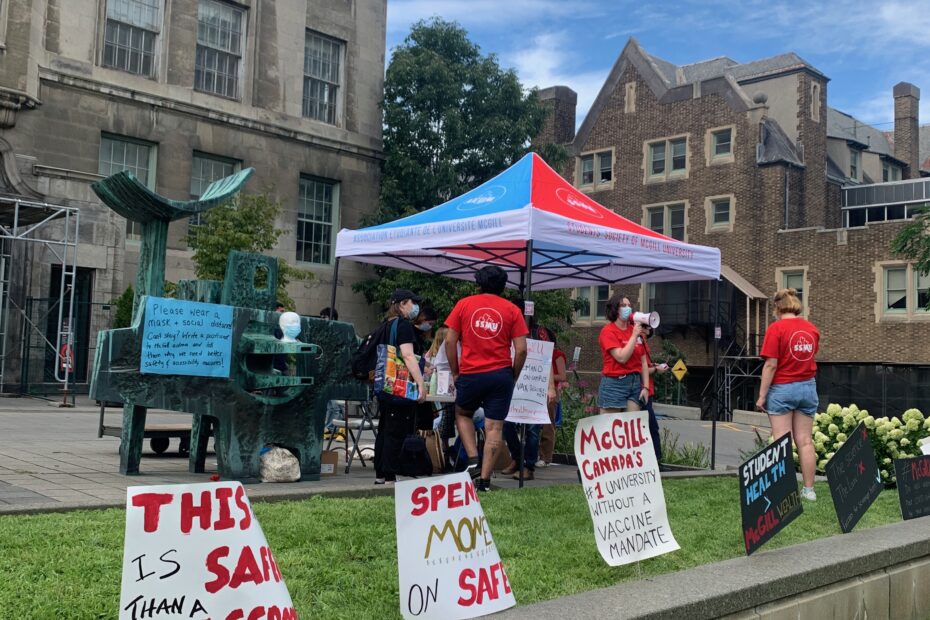 On September 1, the first day of classes of the Fall semester, students congregated in front of the James Administration building from 9 AM to 5 PM in a protest organized by SSMU. Protest organizers called on the University to create more comprehensive guidelines and equitable accommodations relating to COVID-19 and the return to in-person classes. Protesters were masked and socially distanced. Organizers shouted their demands through megaphones, while attendees were encouraged to write postcards to be delivered to the McGill administration listing their concerns.

In an August 31 email, SSMU called on students to attend the protest and outlined five specific demands: (1) accommodations for international students unable to return to Canada at this time, (2) accommodations for students who are unable or for whom it is unsafe to return to in-person activities, (3) proper and equitable support for students, (4) a comprehensive and equitable vaccine mandate, and (5) student consultation in decision-making concerning COVID-19.

Participants expressed frustration at the university’s failure to require vaccinations for students returning to campus. According to protest-organizer Claire Downie, SSMU VP University Affairs, McGill is failing its students. “We’re one of the last big universities in Canada without a vaccine mandate,” she explained at Wednesday’s protest. The statement was made two days after UBC’s announcement that proof of vaccination or regular rapid testing would be required for students on campus, leaving McGill even further behind other universities’ policies.

In a media roundtable held August 27, Deputy Provost Fabrice Labeau stated that in creating health policies – specifically those related to a vaccine mandate – the University is bound by the existing Quebec legal framework; “Having the choice [to undergo a medical procedure or not] is a fundamental right to the individual here in Quebec,” he explained. He further stated that there’s a way that the university can go above this precedent if “it is absolutely necessary to do so,” specifically if the situation were to worsen and the university had “no way to operate without a vaccine mandate.” Labeau did not clarify the threshold at which this would be possible. In the meantime, however, he claimed that given the university’s high vaccination rates and the health measures put in place on campus, there is not enough to “warrant that we infringe on these basic rights.” These statements were made after an open letter, published on August 23 by 35 lawyers within McGill’s law faculty, began circulating online. This letter highlights the inconsistencies between Quebec law and the legal reasoning put forth by the university, and ultimately argues that a vaccine mandate would be possible in the province.

Sacha Delouvrier, SSMU VP External affairs, also highlighted the ways in which McGill’s preparedness pales in comparison with other universities and lacks adequate accommodations for students. “We have a set of demands that aren’t that hard considering that almost every other university in Canada has implemented them,” he told the Daily, “We want accommodation for immunocompromised individuals, remote learning options, [and] student consultation on COVID policies.” In the August 27 media roundtable, when questioned about remote learning accommodations for students who feel unsafe or uncomfortable returning to in-person activities, Associate Provost Chris Buddle stated that “we are confident in what we’re doing in terms of layers of protection in the classroom environment, so students can feel good about coming in and taking their in-person classes.” He explained that there is a COVID accommodation form available on Minerva that students may fill out if their situation inhibits them from coming to campus (for example, if a student tests positive for COVID). He added, however, that “direct accommodations for students who are feeling […] fearful of coming to campus [are] not likely.” Labeau further claimed that “we do realize that a lot of people don’t feel safe, and I think it’s important to realize that in many cases that doesn’t mean that they are not safe.”

Despite Buddle and Labeau’s claims, student and faculty anxieties remain unappeased. “I’m very worried about catching COVID on campus and spreading it later to vulnerable loved ones and members of the community,” Downie said, “Students shouldn’t have to worry about catching COVID on campus, and that’s the reality of where we are.” She explained that in response to the protest, SSMU has received a wide range of support from students and faculty regarding their list of demands. “We’ve been chatting with people since this morning, and people are really receptive,” she said, “most people agree that everyone should feel safe on campus.”

“Students shouldn’t have to worry about catching COVID on campus, and that’s the reality of where we are.”

Downie stated that SSMU has not heard a response from the University regarding their recent open letter nor the protest. Campus security, however, was sent to kick media recording off campus around mid-morning. Delouvrier explained that CTV and CBC were on campus for less than an hour before they were removed: “[McGill] knows that their accommodations are lacking, they know that they should be ashamed, and they forcibly, with security, kicked off free speech and free press from a public campus,” he commented, “that’s unacceptable.”

As the semester progresses, the future remains unclear. “There is a strong commitment to remaining in person with our teaching and our research activities,” according to Buddle. He explained that should the situation worsen, the university has plans to reinstate distancing and even online classes should it come to it. In the meantime, however, student and faculty demands for comprehensive, equitable accommodations and vaccine mandates remain unheeded.