Solidarity Protest against Line 3 held outside of RBC 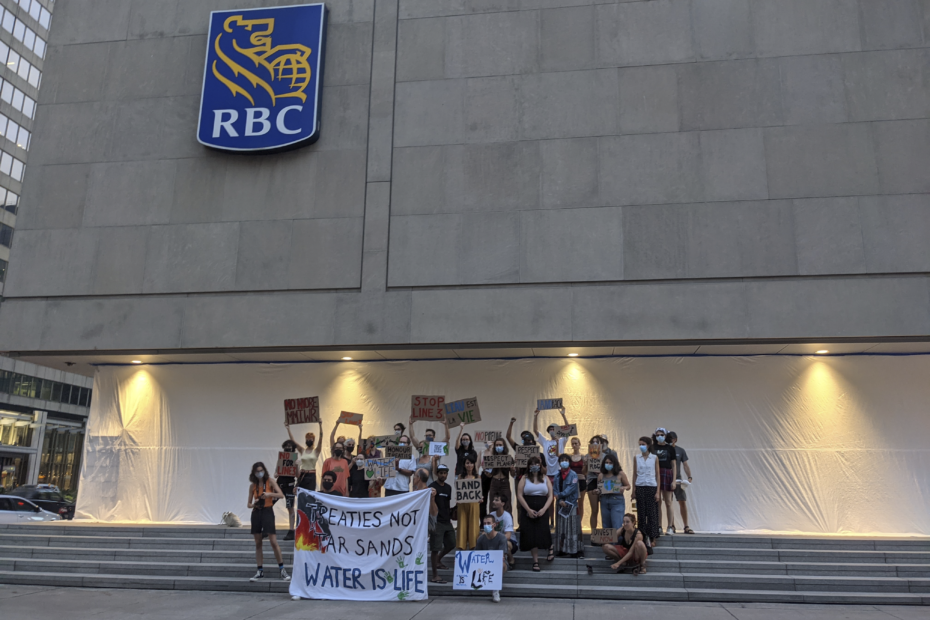 On Friday, August 20, organizers clad in jean jackets and bandannas which read “We are here to protect the water, stop Line 3,” gathered outside of the Royal Bank of Canada (RBC) at Place Ville-Marie. Their purpose was to bring awareness to RBC’s substantial funding of Enbridge’s Line 3 pipeline in Mní Sóta Makoce, or what is currently Minnesota. Though the pipeline has recently been publicized due to the Line 3 replacement project and the protests associated with it, Line 3 has been in existence since the 1960’s – it was the cause of America’s largest ever inland oil spill in 1991. Thus, demonstrators wrote the slogan “RBC funds climate crisis” in chalk outside of the RBC building to draw attention to the disastrous effects that pipelines have on the environment.

Organizers drew a connection between the fossil fuel industry and colonialism: “We recognize the connections between fossil fuels, colonialism, and extractionism,” they stated in a land acknowledgement. The land acknowledgement was followed by three speakers, each of whom spoke about the impact Line 3 would have on Indigenous communities and RBC’s role in the construction of the pipeline.

“Pipelines like Line 3 are deliberately routed through Indigenous communities, where they inevitably poison water and land.”

After Galbraith, Zahur Ashrafuzzaman spoke about his experience at a Line 3 resistance camp and the environmental impact of pipelines, which he witnessed firsthand (though he clarified that, as he is not Indigenous, he cannot be a voice of the front lines). He described the effects of dewatering – the removal of groundwater from a construction site – on Indigenous communities living near Line 3. In June, Enbridge obtained a dewatering permit which allowed them to remove 4.9 billion gallons of water, despite the extreme drought conditions Minnesota was already weathering. Wild rice depends on wet conditions, and Indigenous communities near Line 3 depend upon wild rice, Ashrafuzzaman pointed out – thus, dewatering puts the livelihoods of Indigenous people at risk. He recounted the check-in visits which water protectors conducted to ensure that nearby Indigenous communities were still surviving: “it looks like [the rivers] are dying,” he said, because the rivers are so low.

Alongside the environmental damage wrought by pipelines upon Indigenous communities, the police force at protests also posed an imminent threat to water protectors, according to Ashrafuzzaman. “The procedure of arrest is designed to strip human dignity,” he said, as he described the treatment which police subjected him and other resistance campers to. They utilised rubber bullets, tear gas, and pepper balls, he claimed; “the whole project is genocidal violence.” He again reflected upon RBC’s supposed commitment to Truth and Reconciliation, asking, “how many of those bullets did RBC pay for?” Ultimately, the construction of pipelines is part of a larger colonial project by a violent colonial entity, he explained. Ashrafuzzaman concluded his turn by leading chants against the pipeline: “Step it up RBC, defund Line 3!”

Finally, Greg Mikkelson, a former McGill professor, spoke about the ways in which people can combat RBC and pipelines in general. Mikkelson argued that one of the best ways to fight Enbridge is to raise the costs of building pipelines: for example, calling on the company to dedicate more money to leak detection would disincentivize pipeline construction. He recommends visiting stopline3.org and rbcrevealed.com for more information on the pipeline construction; he also advocates for people to stop banking with RBC, CIBC, and the Bank of Montreal and to move their money to credit unions instead. For Montrealers in particular, he encouraged raising awareness of Line 9, a pipeline which runs from Quebec to Ontario. As Montreal’s mayoral elections will be taking place this fall, Mikkelson believes that raising awareness of Line 9 may prompt municipal politicians to commit to defunding pipeline construction.

Mikkelson also explained the legal arguments against Enbridge pipelines. He mentioned the “rights of nature” approach, which confers rights upon the environment rather than treating land, water, and crops as property. For example, one recently-filed lawsuit lists wild rice as a plaintiff, as wild rice is endangered by pipelines. Mikkelson continued that ecosystems have been gaining legal rights in Indigenous nations, allowing Indigenous people to sue on behalf of the environment to protect resources. However, the next Wednesday, August 25, the Minnesota Supreme Court denied Indigenous activists’ petition against the Court of Appeals decision which allowed Enbridge to continue construction of the Line 3 pipeline.

The demonstration concluded with a screening of First Daughter and the Black Snake, a documentary chronicling the efforts of Winona LaDuke, an Anishinaabe activist who organized attempts to stop Line 3’s construction. Organizers encouraged attendees to donate to a fundraiser for Taysha Martineau, another water protector fighting against its construction. Additionally, organizers encourage donating to The Open Door, Native Women’s Shelter, and the First Peoples Justice Center of Montreal.

Additionally, a march was held on Saturday, August 28, to stand in solidarity with Fairy Creek. Activists at Fairy Creek, a watershed in British Columbia where old-growth logging is conducted, aim to resist the deforestation of the province.

A previous version of this article erroneously quoted Ashrafuzzaman. These quotes have been updated for accuracy. The Daily regrets this error.