“Tax the Rich” is a failed attempt at activism 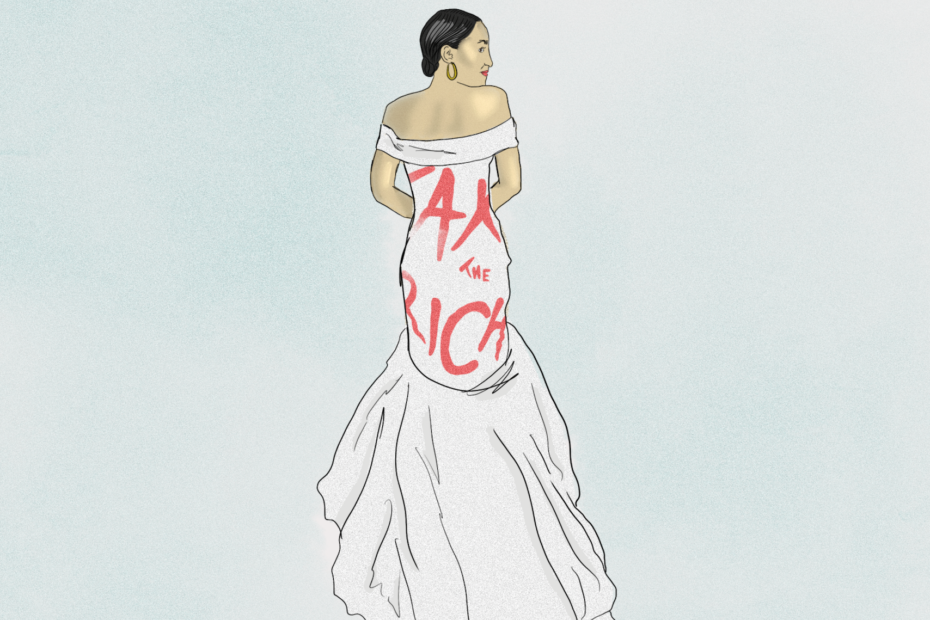 The Met Gala, postponed this year due to COVID-19, is generally touted as one of the most exclusive fashion events of the year. Celebrities and other public figures gather for the gala, which is always centered around a theme; this year, A Lexicon of American Fashion. The Met Gala red carpet is filled with celebrities sporting a wide variety of designs, which range from traditional tuxedos to experimental, sculptural ensembles. However, despite the diversity in sartorial decisions, nearly all in attendance share one commonality: wealth.

A single ticket to the Met Gala costs a minimum of US$30,000, with tables at the event going for as much as US$275,000 each. Beyond that, celebrities in attendance are styled in luxury hotels by top-notch hair and makeup artists, and fitted with extraordinarily expensive outfits. In other words, it is not an affordable affair. When Alexandria Ocasio-Cortez, U.S. Representative of the 14th district in New York City, showed up last Monday wearing a white, floor-length gown which, in bold red letters, read “TAX THE RICH” across the back, she was bound to stir the pot.

Galvanizing, provocative, and to-the-point, Ocasio-Cortez’s dress was designed by Aurora James, founder of Brother Vellies – a Black, immigrant, woman-owned high-fashion label. Similarly, Ocasio-Cortez’s hair, makeup, and photography for the event was fashioned entirely by BIPOC, women, and LGBTQ+ artists. Ocasio-Cortez was intentional about avoiding cisgender, straight, white men designers and stylists, who historically make up the majority of the American fashion industry.

While New York City politicians are regularly offered an invitation to the Met Gala free of charge – as they bear an interest in New York’s cultural institutions due to the city’s “creative economy” – many criticized Ocasio-Cortez for attending such an expensive event while sporting what seems to be a glaringly hypocritical message. Ocasio-Cortez defended her attendance in an interview filmed at the event, saying, in reference to her dress, “I think it’s incredibly important, because when we talk about supporting working families, and when we talk about having a fair tax code, oftentimes this conversation is happening among working and middle class people[…] and I think it’s time that we bring all classes into the conversation of having a fairer country.”

In comparison, the stakes for political expression at the Met Gala are relatively low: Ocasio-Cortez could (and did) wear a dress exhibiting such a pithy slogan without any significant repercussions aside from ensuant internet feuds. As such, those on the internet continued to insist that Ocasio-Cortez’s dress choice was an archetypal example of performative activism. Instagram commenters were quick to point out the hypocrisy and performative nature of Ocasio-Cortez’s gesture, with comments such as “I’m sorry[…] but this is performative bullshit. Enjoy rubbing elbows with the rich at a party in which the tickets cost 30k,” and “You wore this at an event with a lot of rich people though? When does the message actually become the deed?”

Ocasio-Cortez, however, has also received plenty of praise. On Instagram, author and fashion consultant Aja Barber proclaimed in regard to Ocasio-Cortez’s dress “What is more glorious than showing up to a rich person event like this and telling rich people you’re coming for them and especially them while eating their free food?” Barber elucidates that while the “tax the rich” message was not “quite shocking [it was still] tongue in cheek,” especially for the event to which it was worn.

While the maddening gridlock that is the American government severely hinders any one congressperson’s ability to enact dramatic tax reform, Ocasio-Cortez has consistently advocated for a massive increase in taxation for the very wealthy. To fund the Green New Deal – which was co-authored by Ocasio-Cortez and Senator Edward Markey of Massachusetts – Ocasio-Cortez proposes a top tax level of 70 per cent. For reference, the current top marginal tax rate in the United States sits at a cool 37 per cent. So while her dress itself might not actually be effective at taxing the rich, her policy and agenda certainly reinforce her message of taxing the rich, and so does her status as a self-proclaimed democratic socialist.

Although Ocasio-Cortez sparked the most public discourse, she was not the only one at the Met Gala championing explicit messages of politics or human rights through their style. Soccer player Megan Rapinoe carried a clutch which read “In Gay We Trust,” a nod to the official motto of the United States, “In God We Trust.” Additionally, Carolyn Maloney, US Representative of New York’s 12th district, wore a dress which read “Equal Rights for Women” – in reference to the women’s suffrage movements of the early 20th century. As poignantly expressed by the designer Aurora James, fashion is not only a medium for aesthetic expression, but “at its best is a tool to express ourselves, share our cultural identities and challenge ideas and norms.”