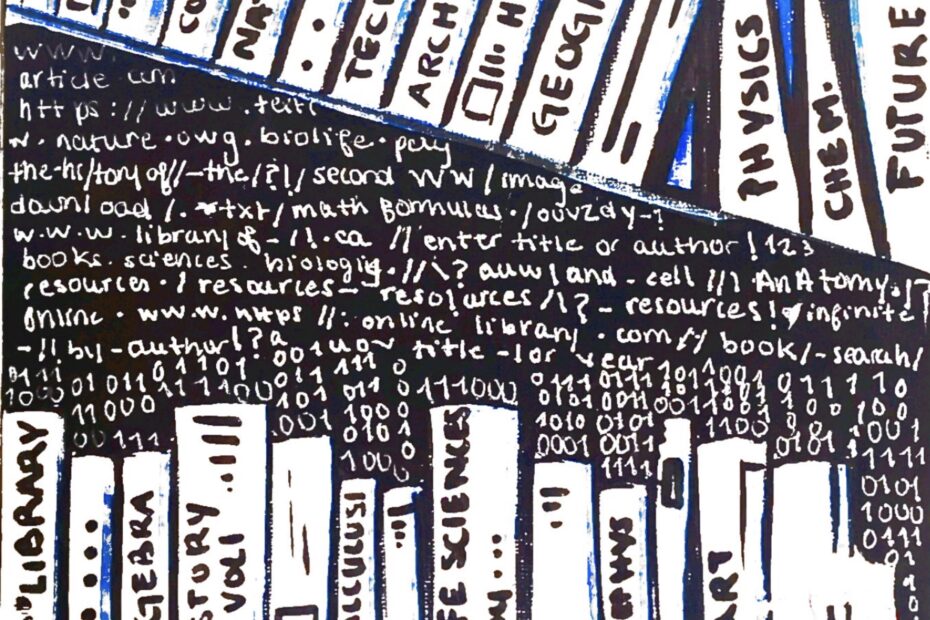 The COVID-19 pandemic has exacerbated pre-existing barriers to digital literacy, with access to the internet and expensive technology becoming more important than ever as the pandemic has played out. People without access to technology, a reliable internet connection, and digital literacy training are inevitably disadvantaged in a world structured around online activity and technological access, where the internet is an essential tool to acquire and exchange necessary information. Public libraries are important community resources, bridging the digital divide by making necessary technology more widely accessible. Libraries provide an expansive variety of technology resources: color printers, large format printers, 3D printers, copy machines, fax machines, scanners, laptops, tablets, video game consoles, VR headsets, early learning devices, e-readers, and assistive technology, among other things. At BAnQ Grande Bibliotheque, the biggest library in Quebec, 532, 430 people access the internet each day, according to a 2018 survey – that is roughly 580 per floor each day.

In 2020, the Public Library Association (PLA) surveyed the technology capacity, infrastructure, budget and staff of public libraries in the United States to get a better picture of the library’s role in digital equity – a “launch pad for […] exploring technology application, services and devices.” Their Public Library Technology Survey found that 32.6 per cent of public libraries offer internet hotspots for loan, more than 88 per cent provide some kind of formal or informal digital literacy programming, and 36.7 per cent have dedicated staff for digital literacy and technology programs. Digital literacy training ranges from one-on-one help with general computer skills and internet use, to coding and website development classes. Further, libraries have a significant role in providing access to employment resources, online health resources, and online language learning. However, the survey found significant resource disparities between urban, rural, and suburban libraries – disparities include bandwidth capacity, scope of available technology, and staff.

The Toronto Public Library (TPL) conducted a similar survey of libraries in the territory known as Ontario in 2016. TPL wrote that “digital inclusion is now a stated part of Toronto Public Library’s mandate, one [TPL is]  aiming to strengthen over the next five years, though they’ve been providing access for nearly as long as there have been publicly available computers.” 56 per cent of survey respondents who otherwise would not have had access to technology used technology at the library, and 36 per cent of respondents who used technology services related to workforce development did so to develop job-finding skills. The survey noted that broadband and connectivity issues are most disparate in rural regions and/or for low-income populations, and specifically for First Nations communities.

First Nations Technology Council, a North Vancouver based non-profit, reports that only 25 per cent of Indigenous communities in BC meet the standard minimum high-speed broadband of 50 mbps download speed and 10 mbps upload speed. Royal Bank of Canada records similar statistics nationwide, reporting that only 24 per cent of households in Indigenous communities across Canada have access to quality, high-speed Internet. More than 500 First Nations, Inuit, and Metis communities within Canada also do not have access to a public library- of the 133 First Nation communities in Ontario, only 46 have public libraries. The libraries in communities that do have access are inadequately resourced, limited by a low budget. Unlike other libraries in Ontario, libraries in First Nations communities are not funded by tax revenue – library funds are instead taken from those allocated for ‘on-reserve’ education and are distributed by the provincial ministry of tourism, culture, and sport to existing libraries. Ontario region ‘on-reserve’ education receives over 30 per cent less funding than that designated for education ‘off-reserve.’ In 2017, the National Reading Campaign submitted a federal funding request to the Ministry of Finance to “establish and enhance libraries within Indigenous communities” – the appeal was for “a three-year, $90m fund to construct libraries, and an additional fund (approximately $6m/year) for operational costs.” The request was submitted under the context of the Trudeau government’s supposed $1.2 billion commitment to invest into social infrastructure in First Nations, Inuit, and Northern communities – the plan outlined in chapter 3 of Budget 2016, and expanded to $18 billion in Budget 2021. The request submitted that the Ministry of Finance should support the Ministry of Indigenous and Northern Affairs in “an initial three year commitment […] to build 10 libraries a year,” a “goal” that “would create 30 libraries, and as a result, an additional 15% of Indigenous communities would have access to a public library,” which would mean access to digital training and employment opportunities.

The PLA survey reported that when libraries were forced to close due to the pandemic, “many boosted their Wi-FI signals” and made technology available for loan. Likewise, TPL initiated their WiFi On Wheels program which “offer[ed] free WiFi from their bookmobile in parks in neighborhoods hit hard by the virus.” Choosing to attend school or work online is not an option without internet access at home, and so this service is essential for many of those at risk of severe COVID-19 symptoms.

Library technology services are essential for Indigenous, poor, and rural communities – and so libraries and digital equity initiatives should be expanded within these communities. Initiatives such as Chicago Public Library’s YOUmedia lab, a learning space for teenagers to engage with graphic design, photography, video, music, 2D/3D design, and STEM.