Policy passed to the Board of Directors to be ratified 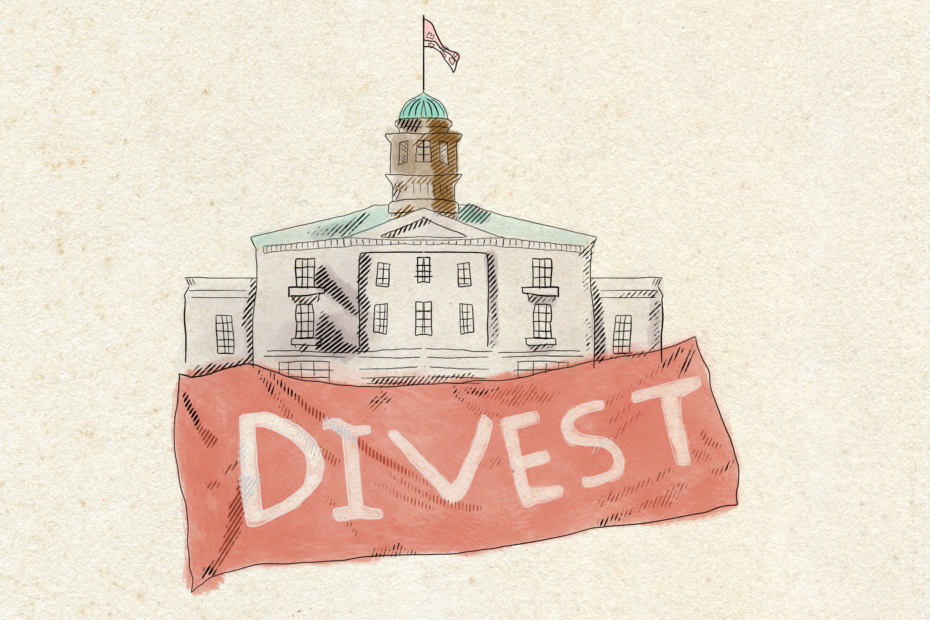 On Tuesday, February 16, SSMU held its Winter 2021 General Assembly. Remarkably, the GA reached its quorum of 350 people and, for part of the meeting, held official GA status, meaning that any votes during those portions of the meeting would be binding. The most time consuming topic of discussion was the Motion Regarding the Adoption of the Divest for Human Rights Policy, which was submitted by petition. The motion sought to “expand the SSMU’s commitment to leadership on matters of social justice and human rights by establishing” a campaign urging McGill to divest from companies “which enable and profit from multiple forms of systemic violence, including settler-colonial land theft, environmental destruction, war crimes, crimes against humanity and genocide.” The corporations listed in the appendix of the motion are TC Energy Corporation (and therefore the Coastal GasLink Pipeline), Lockheed Martin, Re/Max, Oshkosh Corporation, Puma, Foot Locker, Nordstrom, and Kohl’s.

The motion generated much discussion from attendees of the General Assembly, both in favour of and against its contents. Most controversial was the topic of divestment from Re/Max, which the motions states “sells real estate in illegal Israeli settlements on stolen Palestinian land, thereby facilitating and profiting from the transfer of Israeli settlers into occupied Palestinian territory by the Israeli government,” and Oshkosh Corporation, “whose vehicles are used to transport the soldiers and weapons of the Israeli military.” Discussion lasted for approximately two and half hours. Though the motion focused on military activity and the corporations’ operations on Palestinian land, much of the discussion centred concerns that a divestment campaign would lead to an increase in antisemitism on campus, due to a belief that the motion specifically targeted Israel. Multiple attendees, including VP University Affairs Brooklyn Frizzle, responded by explaining that the motion targeted specific corporations and not nations as a whole.

The assembly moved to vote on the motion at approximately 9:00 p.m. EST. At this time, a number of participants left the GA, therefore causing the loss of quorum and turning the assembly into a consultative forum, meaning that votes would not be binding and the motion would have to be passed to the Legislative Council. Upon voting, the motion passed and was tabled to be discussed at the following week’s Legislative Council meeting.

During the February 25 Legislative Council meeting, the motion was presented by VP External Ayo Ogunremi, who explained that the motion is intended to expand SSMU’s commitment to social justice and human rights by participating in divestment campaigns concerning several companies in which McGill is invested. He also noted that the “significant” amount of interest which students showed in the motion was important for SSMU representatives to consider while voting on the motion.

Following Ogunremi’s introduction was a question period, which began with Management Representative Noah Gundermann asking movers of the motion to identify who they consulted in creating the motion. Maya Garfinkel, who moved the motion by petition, responded that the motion’s creators began their consultations by discussing with students, SSMU representatives, and student organizations such as Divest McGill and Climate Justice Action McGill (CJAM). Ogunremi added that the “Consultations Completed” section of the motion specifies that consultations were conducted with SSMU’s Governance Manager, President, and Communications Manager. He also stated that the motion had been reviewed and endorsed by SSMU’s Student Equity Committee.

The debate period for the motion began with a pre-recorded statement from a student. The speaker asserted that the motion “creates a false and misleading parallel between the complex Israeli-Palestinian conflict and human rights concerns worldwide.” They claimed that the other countries mentioned in the motion are “incomparable” to Israel, and characterized the “anti-Zionist elements” of the clauses concerning Israel as antisemitic. The student further argued that the motion was associated with the Boycott, Divest and Sanctions (BDS) movement, making it a “fundamental violation of SSMU’s commitment to leadership in matters of human rights and social justice.” They speculated that the adoption of the motion would “jeopardize the safety and well-being of students,” claiming that Jewish students on campus saw an increase in antisemitism “following the many anti-Israel occurrences at McGill.”

Members of the Legislative Council expressed concern over the motion’s political content. Medical Representative Benson Wan explained that he felt the motion violated the Medical Student Society’s (MSS) Policy on General Council Positions and Press Releases, which holds that MSS representatives must survey members of the MSS via referendum or general assembly before taking political positions. Arts Representative Libby Williamson claimed that she had spoken to many constituents who felt that SSMU was neglecting student concerns by focusing on political issues. Additionally, Williamson characterized the motion as controversial, and claimed that divestment from Israel is unjustified: “the clauses that focus on the Israeli-Palestinian conflict attempt to create parallels between Israel and Palestine and other human rights concerns worldwide. [These parallels] do not exist and are harmful to imply.” Similarly, Dentistry Representative Tom Lee claimed that his constituents were largely opposed to the motion, on the grounds that it “disproportionately focuses on Israeli-Palestinian conflicts,” and may set a precedent for SSMU supporting the BDS movement.

However, Frizzle claimed that they had never seen students with a higher level of engagement or interest than in the passage of this motion. “As democratic representatives, our mandate is clear: this is a policy represented by the membership […] I believe it is our responsibility as councillors not to be swayed by what I see as misinformation.” Likewise, Ogunremi described student interest in the motion as “extraordinary,” and said that SSMU executives have a responsibility to support marginalized communities from across the world. Member of the gallery Simone Bobrow expressed frustration with the claim that the motion was irrelevant to student concerns, saying that Palestinian students “have faced discrimination on campus as a result of [the Israel-Palestine] conflict.”

Councillor Gundermann also expressed opposition to the motion. He claimed that SSMU has no reason to divest from Lockheed-Martin – which the motion identifies as “the developer of weapons […] that has been used in violent conflicts in over 15 countries –” because the purchase of weapons should be “in the hands of governments.” He also took issue with divestment from the Oshkosh corporation, claiming that Oshkosh has been “internationally recognized as ethical,” and ultimately characterized the motion as “misleading and biased.”

Supporters of the motion argued that it was not intended to perpetuate antisemitism or single out the state of Israel. Mover Noah Fisher said that the motion should not be interpreted as denouncing the state of Israel as a whole, as it only focuses on Re/max’s use of occupied Palestinian territory and not the entire state. “I find it insulting to suggest that the main way to oppose [antisemitism] is to fight individuals who are simply trying to end an occupation. I can guarantee that most of the instances of antisemitism that I’ve experienced, if not all of them, have not involved individuals trying to end an occupation,” he said, explaining that opposing human rights efforts would not help to combat antisemitism on campus. Similarly, Frizzle noted that the motion does not contain references to any individual nation, nor to Israeli corporations. Member of the gallery Ghida Malawi pointed out that the motion has no affiliation with BDS, and expressed frustration that councillors were conflating BDS with antisemitism. She also asked why councillors were claiming that Israel had been singled out, when human rights violations in other countries were also cited in the motion.

Garfinkel also spoke about her experiences with antisemitism: “As a Jewish student, the antisemitism that I’m concerned about is not coming from movements like [the motion and BDS].” She also said that “criticizing the occupation [of Palestine] is not the same as criticizing Israel’s right to exist.” She characterized some councillor’s treatments of the motion as insulting, and asked, “What claim for Palestinian human rights would this legislative council not take issue with?”

Clubs Representative Hussain Awan further expressed support for the motion, and said that he had been “dumbfounded” by some criticisms of the motion. He argued that portraying movers of the motion as “closeted BDS activists” was “wild speculation,” and further explained that he had seen much student interest in the many human rights issues addressed by the motion.