‘Bridgerton’ Isn’t the Escape It Wants to Be

A review of Netflix’s series ‘Bridgerton’ 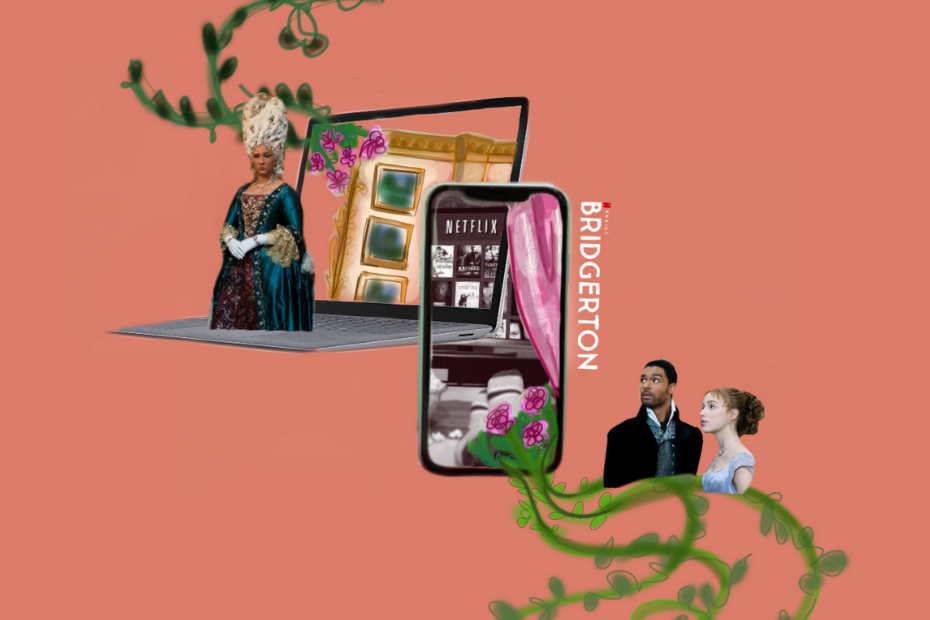 When lockdowns began back in March 2020, articles with headlines such as ‘The Best Shows to Stream If You’re in Quarantine,’ ‘Netflix’s Top 250 Best Movies To Watch In Lockdown,’ and ‘17 shows to binge-watch while hiding out from coronavirus‘ popped up like digital weeds. The rising crescendo of COVID op-eds, news reports, podcasts, and articles washed over us, while streaming services remained stalwart. Netflix, a content-producing behemoth, has shown no signs of slowing down; the online-streaming platform debuted over 113 shows in 2020, and is slated to produce over 100 more in 2021.

Released on December 25 2020, Bridgerton is a series decked out in tulle and anxiety about finding a husband in Regency-era London before the end of the social season. Despite the endlessly bingeable gentry drama and schemes to attract suitors, Bridgerton lacks an understanding of consent and racial dynamics. These problems effectively taint the series’ escapist purpose, leaving viewers more troubled than entertained.

Bridgerton is based on an eight-book romance series by Julia Quinn, and it was written and created by Chris Van Dusen and produced by the iconic Shonda Rhimes. The series is a socialite drama filled with eligible bachelors and young ladies all vying for one thing: marriage. The first season focuses mainly on the first instalment of the book series, The Duke and I, which follows the tempestuous romance between the demure Daphne Bridgerton (Phoebe Dynevor) and the dark and stormy Duke of Hastings (Regé-Jean Page).

As Lady Daphne navigates her second season in the ton (le bon ton was the colloquial name for British high society in late Regency-era London, translated to mean “good manners”), the dashing Duke returns from his years-long travels abroad after the death of his father. The Duke and Daphne’s chemistry is so magnetic that they crash into each other at a ball, and so the enemies-to-lovers tale begins. In a predictable turn of events, they couple up so that Daphne can attract jealous suitors with the charming Duke by her side, and so that he can keep young socialites and their clawing mothers at bay.

The show is essentially eight hours of romance literature you could find at your local airport. There’s romance, there’s raunch, and just when you think Lady Daphne and the Duke of Hastings are headed for Splitsville, they return to each other, because of course love conquers all. In a time where all we do is wander around in our sweatpants, a couple of hours in this world of pomp and circumstance is a nice change of pace. Beyond the fact that Bridgerton is set in the late-seventeenth and early eighteenth century, the dancing, the schmoozing, and the being all-dolled-up-in-public feel unfamiliar to homebound viewers.

But the series’ escapist world also raises concerns about consent and racial representation, which distracts viewers from the glitzy romance that the show tries so hard to focus on. One of Bridgerton’s standout features is that it includes a racially diverse cast within an aristocratic society, a social class that is historically hallmarked by white homogeneity. Yet, critics have accused the writers of Bridgerton of glossing over the rampant racism present in the time period it represents, and of only burdening its Black characters with an awareness of racism.

The Duke of Hastings and his mentor, Lady Danbury, have several conversations referencing “us” versus “them,” and how they must conduct themselves in this new world. Meanwhile, the white characters of Bridgerton prance around looking for their ideal mates, without ever speaking about race. The presence of Black characters amid the upper echelons of London society is explained by the fact that the leader of the ton, Queen Charlotte, has recently decreed that Black people can now become members of the gentry. Bridgerton makes this attempt to sidestep the issue of race, and fails; the majority of villains in Bridgerton are Black, and white characters monopolize almost all the speaking roles. Though Bridgerton contorts itself as a colour-blind show, it’s hard to escape the fundamental truth that the society it parallels was created because of slavery and oppression.

Equally disturbing is the attitude Bridgerton presents towards consent. Once the Duke and Daphne marry, the show mainly focuses on her lack of sexual education, as well as the Duke’s refusal to have children. The show goes even so far as to include a scene where Daphne sexually assaults the Duke. This act is effectively never resolved, and the couple lives happily ever after. Bridgerton’s final episodes cast a shadow over the entire season, complicating a series that tries so hard to provide viewers with a break from reality. Though the series presents itself as a light-weight fantasy, the way it contends with issues of race and consent never reaches any semblance of a conclusion.

Despite the backlash, Netflix has announced that Bridgerton has been renewed for a second season, and production for the show will start this spring. The endless content factory whirrs away, the series only a cog in a machine meant to distract from the world around us. It seems Bridgerton doesn’t remove us from reality at all, instead gesturing clumsily toward systemic issues. The show can’t help but pop its own bubble of whirlwind romance and Regency-era finery.