Not a Sinner, Just a Teenager 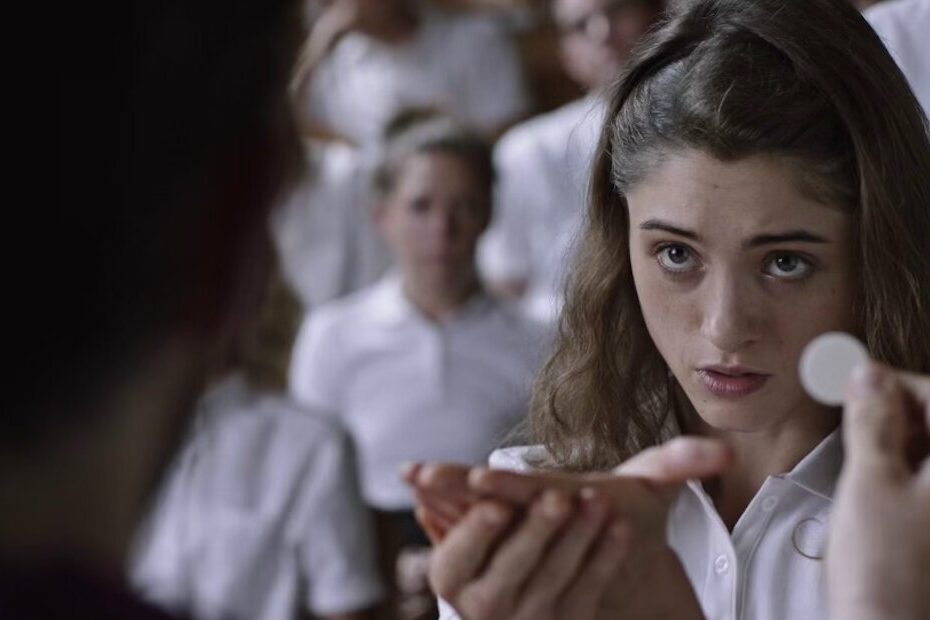 This review contains spoilers for the film Yes, God, Yes.

I’m a sucker for a female-centered coming of age comedy, especially one of the raunchier variety. In high school, I mined movies and TV shows for scenes where young women expressed their sexuality through self-pleasure; seeing these instances enacted on screen made me feel less guilty about what I was figuring out myself. Karen Maine’s semi-autobiographical indie comedy Yes, God, Yes is the answer to my teenage prayers. The film allows its protagonist to explore her sexuality in a refreshing and honest way, and its message is ultimately comforting: it’s okay to feel turned on.

Set in the early 2000s, the film follows 16-year old Alice (Natalia Dyer) who attends a four-day religious retreat led by her Midwestern Catholic high school, in order to rehabilitate her social reputation. A rumour about Alice has begun to circulate; students are saying that she had sex with her classmate, and although she didn’t, she hasn’t not thought about doing it. To ease her private guilt about her impure impulses, Alice decides to go on this trip, where she is lectured by her peers and instructors on the sins of the flesh.

It’s during one of these lectures that Alice’s retreat leader, Father Murphy (Timothy Simons), states that “Guys are like microwave ovens, and girls are like conventional ovens. Guys only need a few seconds like a microwave to get switched on. While ladies, they need to preheat for a while.” This metaphor will be referenced again when a boy berates Alice for giving him a boner during a makeout session (“You turned me on like a microwave!”). Throughout the film, Alice is blamed for the sexual deviance of the men around her, while also not allowed to have her own desires. Women are so often socialized to feel guilty about their sexuality, and are misunderstood by the institutions they’re entrenched in. A rarity in the world of provocative coming of age films, which so often focus on teenage boys’ sexual exploits, Yes, God, Yes doesn’t shy away from pointing out sexual double standards; we see Alice begin to understand that her male peers get away with the same actions she gets punished for.

One notable aspect of the film is its minimal use of dialogue. Dyer’s performance is predominantly conveyed through her facial expressions; her emotive glances and stares relay both curiosity and naivete – Alice is eager to learn about sex, but is also ashamed that she thinks about it. The film’s focus on her gaze points to the constant state of surveillance that she and her peers find themselves in, as well as her frequent discoveries of her peers performing clandestine acts. In the film’s most intimate scene, Alice discovers the vibration setting on her Nokia cell phone in her retreat-allocated bedroom. She slowly places the phone in between her legs and starts masturbating, and the camera switches from a close up of her face to a shot of a large crucifix on the wall. Alice not only feels like she is being watched by her peers and instructors, but also by God – and as viewers of the film, we participate in that surveillance.

By the end of the retreat, Alice has an awakening of sorts, only not a spiritual one. With the help of the owner (Susan Blackwell) of a bar that she escapes to beyond the confines of the retreat, Alice understands that her desires and feelings are normal – she’s not a sinner, she’s just a teenager. With this newfound perspective, she returns home and masturbates to a steamy scene from Titanic without remorse. The film ends without a clear idea of what’s next for Alice, but it leaves her feeling more empowered and in control than she felt at the beginning of the story. Yes, God, Yes won’t relieve viewers of our awkward teenage memories, but it might make us feel less guilty about them.