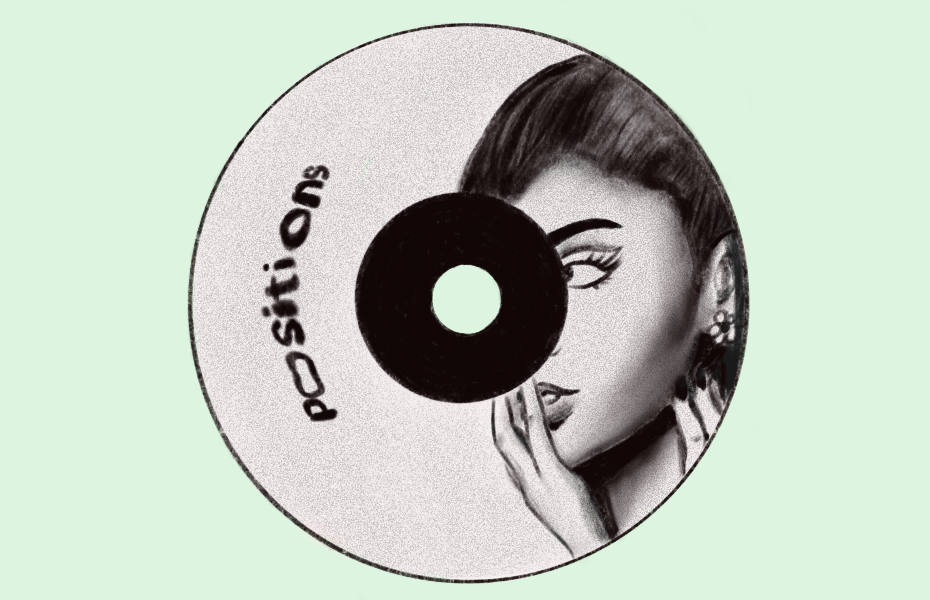 With the release of her sixth studio album, Positions, Ariana Grande is back and, well, about the same as ever. The music video for the album’s title track hints at the 1960s aesthetic which comes to fruition in Positions’ visuals; say hello to Twiggy-inspired eye makeup and voluminous locks straight out of Hairspray! (The speed at which female pop stars reinvent themselves never ceases to amaze me.) But this new era of Ariana goes beyond marketing – I was pleasantly surprised to hear the retro influence also carry over into some of Positions’ musical moments.

The album’s first track, “shut up,” opens with strings that culminate in a final orchestral section reminiscent of a Bing Crosby Christmas song. The disco riff that drives “love language” wouldn’t sound out of place on Off the Wall, and the strings that underline the chorus of “my hair” feel like a direct invocation of Etta James’ “At Last.” It’s these songs that push the Ariana envelope; their novelty makes them feel like the cornerstones of the record, giving pause between the more familiar sounding tracks. With their subtle 1950s, 60s, and 70s influence, “shut up,” “love language,” and “my hair” challenge Grande to use her immense vocal prowess for a type of singing that is more stylistic than the belting and high notes for which she is deservedly famous. “my hair” is a particular stand-out with its jazz chords, Grande’s understated vocal delivery on the verses, and her entirely whistle-toned final chorus. “love language” also dabbles in harmonies not typically found on a pop record, but it’s the crunch between the vocal layers during the striking chorus of “shut up” that sticks with me most.

Only a few other songs on Positions come into their own – “34+35,” “obvious,” “just like magic,” and the title track are the B-listers. The rest of the album feels like filler. Perhaps this should be expected when an artist is as prolific as Grande. This album is her third in a little over two years; she is producing records at a frequency which is standard in the rap industry, as opposed to the pop industry, where artists usually take breaks of at least two years in between full-length releases. The result is an album which can sometimes feel rushed. Positions is the kind of record I will happily jam out to for a couple of months, then forget about, cast out of my Spotify “recently played.” The strings that show up over the trap beats on almost every song come across as a weak attempt to maintain the cohesiveness of the album’s retro aesthetic. The Ty Dolla $ign and the Weeknd collaborations take themselves too seriously and get bogged down in their slowness. “motive,” featuring Doja Cat, doesn’t live up to its potential. Both artists are proven hitmakers, yet this collaboration lacks Doja Cat’s youthful levity, and it fails to build to any high point.

Positions continues to co-opt Black musical styles like R&B, rap, and jazz, even after the backlash Grande received for her 2019 single “7 rings,” which many accused of being culturally appropriative in both its lyrics and its flow. While Michael Harriot argues that “anyone making popular music [today] is – by definition – making black music, regardless of their color,” it is clear that many Black music critics feel Grande belongs to a category of musicians who fail to pay homage to the culture from which they are borrowing. In Pitchfork, critic Rawiya Kameir contends, “Pop culture seem[s] to reflect the philosophy that undergirded centuries of American life: We want the fruits of Blackness, but not Black people,” invoking the singer as one of those “fruits.” Grande continues to fail to publicly reckon with her history of appropriating Black culture.

Positions ultimately signals a new phase in Grande’s personal healing and musical evolution. The album’s lyrics dwell much more on sex – what it delivers in 1950s Bing Crosby energy, it doubles up on in 1990s bedroom jams – and much less on the trauma that Grande has endured in the public eye over the last few years. While the singer still discloses some of her personal struggles, notably on the confessional closing track “pov,” many songs are exceedingly sexually explicit and playful, sometimes at the risk of clumsiness – I’ll let you add 34 and 35 together. The album makes musical choices that go beyond Grande’s comfort zone, and its lyrics assert her success and power, encouraging listeners to do the same: “Just like magic / Middle finger to my thumb and then I snap it / […] I get everything I want ‘cause I attract it.” Though Grande does manage to bottle up some of that magic in Positions, and share it with her fans, the record’s shortcomings, and what I predict will be its lack of staying power mean that it can only be considered a moderate success.