“It Shouldn’t Be This Hard to Be Accommodated” 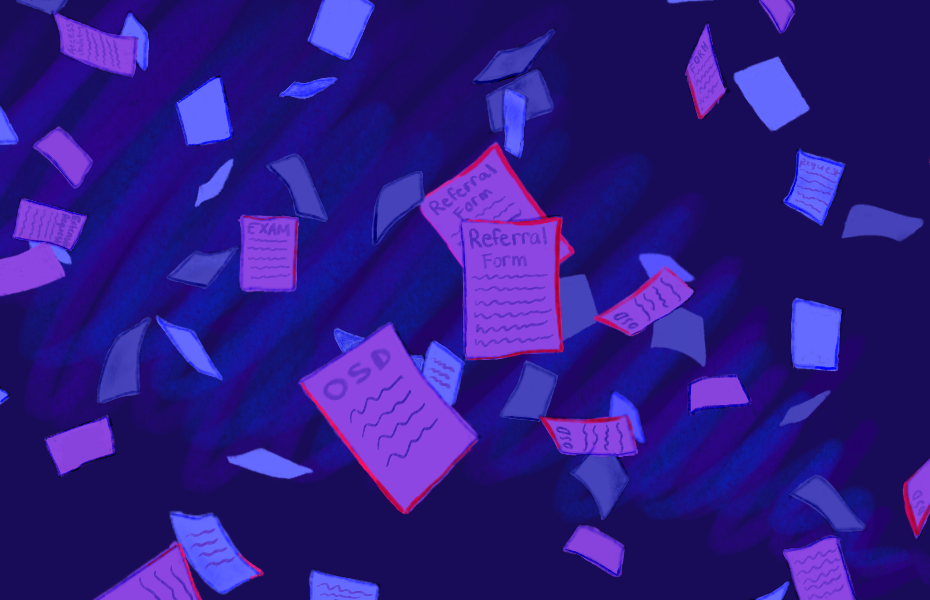 The Office for Students with Disabilities (OSD) is a McGill Student Service that advocates for, and provides services to undergraduate and graduate students with disabilities. While most students interact with the office to request accommodations for exams and note-sharing, the OSD offers additional resources such as learning strategy webinars, peer mentorship, and an annual lecture on an academic topic related to disability. The office also works toward making the McGill campus more physically accessible, and it promotes Universal Design for Learning (UDL).

Many students, however, report difficulties accessing and using OSD services. The Daily spoke with students who have faced a number of these barriers.

To register and receive accommodations with the OSD, students must provide medical documents that meet specific criteria, including a diagnosis, according to provincial law. Students report facing financial, language, and other barriers when trying to acquire this documentation, which can only be provided by certain types of medical professionals.

Emma,* a second-year student who experiences chronic migraines, explained that the OSD did not accept paperwork from her doctor at the Wellness Hub. “They were like, ‘we need you to go to a neurologist.’ I did go to one back home, but I can’t reach them [now] because I don’t have a phone that can call [my home country], and they don’t have an email address.” Because Emma’s neurologist is in a different time zone, and the OSD only provided her with paperwork in English, the process was made even more difficult for her.

Leila,* a fourth-year student, shared her frustration regarding the OSD website’s unclear registration instructions. “I asked my therapist to fill out the OSD referral forms so that I could get accommodations, as per the OSD website. She filled out the documentation based on an existing diagnosis, and recommended that I also get tested for ADHD, since she can’t diagnose me for that. When I brought the forms to my appointment, I asked if I could get subsidized testing for ADHD. The OSD said they only subsidize testing for students if they don’t already have a diagnosis, so I [didn’t qualify] for the subsidy. If I hadn’t provided documentation with a diagnosis, I could have possibly gotten tested at the centre. There is no clear information on [the OSD website] about subsidized ADHD testing. Had I known, I would have done things differently. ADHD testing is very expensive.”

“To make a four-year long story short, the OSD refused [to register] me because I have […] above average grades.”

While Leila said she regrets bringing medical documents to her appointment, GC,* another fourth-year student, shared the trouble they have had accessing the OSD without documentation. “I’ve been emailing various people since the start of the semester [to ask] what I should do to get [documentation] and a diagnosis, and so far it’s just been a lot of cancelled appointments due to my lack of [documentation] in the first place.”

Yara,* a student in the School of Social Work, mentioned a similar incident: “one of my classmates [was registered with] the equivalent of the OSD in CEGEP, but because she did not have an official diagnosis, she [couldn’t receive] any help in university.”

After going through what they described as a slow and confusing registration process, fourth-year student Tessa reports being ultimately turned away from the OSD due to perceived lack of need. “To make a four-year long story short, the OSD refused [to register] me because I have […] above average grades.”

Many students felt that communication from the OSD during the registration process was unclear. “Trying to get a diagnosis, or knowing who at McGill will give [you] one is really hard – everyone seems to [direct you to] a different person, [and each person] wants a different type of referral,” GC told the Daily. Tessa echoed this concern: “I basically had to get three forms filled out because they either kept giving me the wrong one, or [the one I needed] kept changing.”

According to students interviewed by the Daily, there has been a significant decrease in note-takers, whom the OSD now refers to as “note-sharers,” in the last few years. “Half of my classes don’t have note-takers. I have one class, I think, that might have [someone], but they’ve only uploaded four files since the beginning of the semester,” Emma mentioned. Students attribute this lack of note-takers to decreases in payment, and the OSD’s final decision to stop paying note-takers entirely last fall. “There were definitely more notes [for] classes when I was in my first year, back when note-takers were paid,” shared Lynne,* another fourth-year student.

Emma had a similar experience: “I have noise and light sensitivity, and for some reason, they have people coming in and out [of the OSD exam centre] constantly, and they shuffle papers the entire time. There was so much noise that I was like, this doesn’t make any sense. It was what I was trying to avoid [by taking my tests] in a smaller room.”

Yara mentioned that accessibility can depend on which professors students have class with, rather than on the OSD and the accommodations they provide. “Honestly, my professors were more accommodating than the OSD. And if I have a professor [who isn’t] accommodating, the OSD is not going to stand up for [me]. I’m really lucky to have professors who want to help me.”

Miranda, a student in the Faculty of Science, said that she finds the process of signing up for accommodations for exams and tests difficult and inefficient. “If I’m doing a quiz, I don’t find it worth it to go through [the entire process] to get my accommodations, even though I would really benefit from having them,” she stated. “It shouldn’t be this hard to be accommodated.”

Students also shared issues they’ve had when receiving the accommodations they are registered for. Miranda recalled an instance when her accommodations were not properly recorded by the OSD. “I start writing my calculus exam assuming that I have the accommodations that I signed up for – 50% extra time. So, I plan for a four-and-a-half-hour exam, but 15 minutes before the three-hour mark, they tell everyone [in the OSD exam centre] that we have 15 minutes left. I raise my hand, and I [explain my accommodations], and they say no, you do not get extra time. And I say, that’s not true, I signed up for it. And they say, no, you’ll be finished in 15 minutes.” Lynne once dealt with a situation similar to Miranda’s – though they registered for their accommodations in advance, the OSD did not notify their professor prior to the exam.

Students have expressed a desire for clearer communication from the OSD. “I think it would really help to have a [clearer] list of steps for students [to register]” said GC. Lynne added that they would like the OSD to “communicate better with [students] about what’s happening, and about how things are going to work.”

In addition to giving students accommodations, the OSD provides McGill faculty with resources regarding classroom accessibility and Universal Design for Learning; these include webinars, a faculty guide, and a COVID-19 FAQ page for instructors. According to Teri Phillips, Director of the OSD, there were “approximately 830 clicks/views” of these tools in September and October 2020. These statistics do not specify, however, whether these are unique page views, nor whether they are from instructors. Phillips stated that while the OSD “encourage[s] faculty […] to take advantage of all the services and supports [they] offer,” only “some areas, such as the Faculty of Science, have mandated Inclusive Assessment Design” for remote learning. This gives professors the option not to implement UDL in classrooms. “Professors forget about us,” Miranda told the Daily, referring to students with disabilities.

“There are ableist persons everywhere,” they stated. “We must fight ableism in academia.”

Jonathan Sterne, a professor in Communication Studies, highlighted the challenge that the McGill community is facing in adjusting accessibility measures to remote learning. “Moving online means we are figuring a lot of things out again. Students are re-learning to be students, profs are re-learning to be teachers, and whatever accommodation schemes we had for classroom settings may not be the right ones for online learning.”

Professor Sterne also stressed the importance of accessibility on an institutional level, stating that, “one thing the University could do better is educate people about disability. There’s still a lot of ignorance and stigma in our community.”

Another faculty member, who asked to remain anonymous, echoed this idea, while indicating the larger issue at hand. “It is not the OSD’s [role] to teach the professors [about] Universal Design for instruction. [The OSD] does not have the human and financial resources to assume that duty. The University should [under]take the social responsibility of educating everyone on ableism, and how to put an end to it.”

“There are ableist persons everywhere,” they stated. “We must fight ableism in academia. That is the challenge.”

* Names have been changed to preserve anonymity.

This article was updated on November 26, 2020 to include comments from the OSD.