On the (under)representation of non-binary lesbians 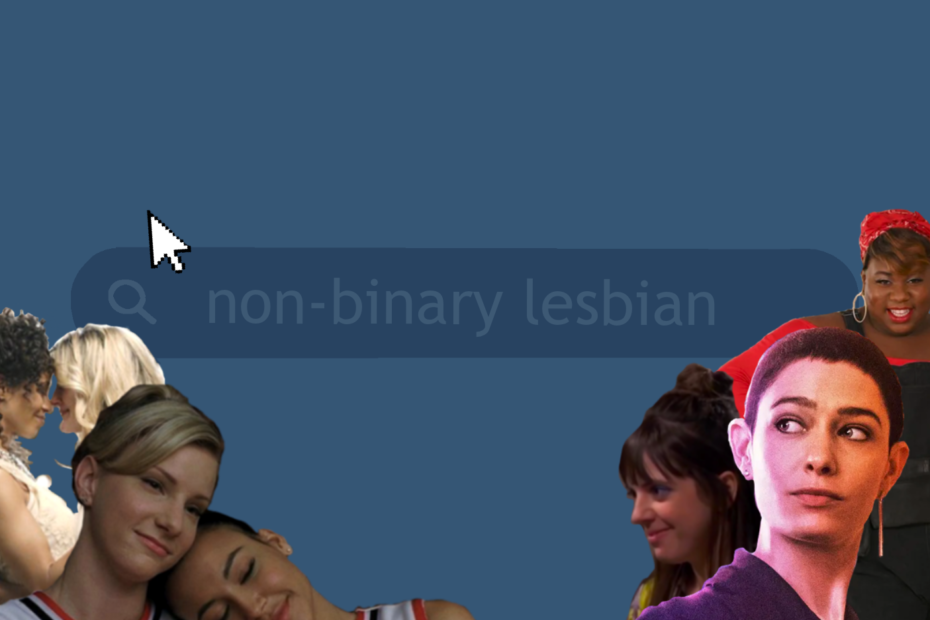 I realized that I was a lesbian in grade eleven. Here’s how it happened: I kissed a girl for the first time, I discovered the infamous lesbian masterdoc, and I read about a little thing called compulsory heterosexuality. It was 2016, and after years of assuming I was bisexual, I’d finally found the label that I wear to this day. 2016 was a great year for lesbian media – I got to see my sexuality represented in Glee’s Santana and Brittany, in Hayley Kiyoko’s bop “Girls Like Girls,” and in Stef and Lena’s marriage on The Fosters. But despite what these characters and people have meant – and continue to mean – to me, I’ve noticed a trend in how lesbians were depicted when I was a teen: most of them were femmes, and certainly all of them were cisgender. At the time, I didn’t understand why this felt alienating to me. But when I arrived at McGill in 2018 and made my first non-binary friends, I finally got it – and came out, again.

It’s not that there was no non-binary representation in the media when I was in high school. As an active member of many Tumblr fandoms – I was dedicated to YouTubers like Dodie and Dan and Phil – I’d interacted with non-binary people in some capacity. I had also engaged with more community-based forms of media created by non-binary folks, like the YouTube channels of Chandler Wilson and Ash Hardell, various fanfictions featuring non-binary characters, and informative comics on my Tumblr dashboard. This content made me feel more comfortable in my gender identity, but it also made me believe that being non-binary was something that only “happened” online on Tumblr, or at Vidcon. Most of my school friends and teachers didn’t understand non-binary genders, and I’d never seen non-binary folks in more mainstream media. I didn’t know how to picture a life where non-binary people existed as “normal” adults. I spent my high school years knowing that non-binary people existed, but I didn’t understand that I could identify that way.

Though I was fortunate to have access to these Internet communities, the lack of non-binary representation in popular media convinced me that these identities didn’t exist in everyday life. GLAAD’S 2019 Where We Are on TV report found that of the 488 regular and recurring LGBTQ characters on American scripted primetime broadcast, cable, and streaming programs that year, only five were non-binary. Back in 2016, there were none; only 16 transgender characters appeared on American television. An area of communications studies called cultivation theory has found that watching television may shape the way that individuals perceive reality, and that the lack of representation of queer people on television leads to the idea that queerness is abnormal or rare. Many LGBTQ+ individuals start coming to terms with their identity through film and television. I was lucky to have supportive friends and family members while I was learning about my gender identity, but I wouldn’t have known how to articulate what I was feeling had I not been what my friends refer to as being “extremely online” – that is, spending too much of my time on Tumblr and in various Internet communities.

That being said, the representation of non-binary folks is expanding. There are now a handful of non-binary characters in film and television; Asia Kate Dillon appears in John Wick: Chapter 3 – Parabellum as a character called The Adjudicator; Alex Newell plays a genderfluid DJ in Zoey’s Extraordinary Playlist, Syd on One Day at a Time uses they/them pronouns, and there’s even Double Trouble, a non-binary shapeshifting mercenary on She-Ra and the Princesses of Power. These characters make me feel like I belong in a way that the media I watched in high school did not.

It’s certainly refreshing to see these characters, but there still isn’t a normalization of non-binary genders in the media. Characters are seldom played by non-binary actors, and they never get to exist in the spotlight. They serve as the best friend, or if they somehow get to have a sexual or romantic life, as the partner. There’s usually a Big Coming Out moment where they have to explain their identity, instead of the character simply being introduced with their pronouns, or being presented as a non-binary person from the get-go.

On One Day at a Time, Syd is introduced as part of a joke about pronouns. And although it’s in good taste, it still makes their identity stick out like a sore thumb. She-Ra’s Double Trouble is a rare form of casual representation, yet their presence underscores the fact that this kind of identity only seems to exist in action movies and fantasy worlds, rather than in the real world. As someone who proudly identifies as a non-binary lesbian, it’s frustrating that the most “relatable” example I have of a sapphic relationship is between One Day at a Time’s Syd and Elena. While I find their teen romance heart-warming, and though Syd is an excellent example of a well-written non-binary character, Syd and Elena don’t model my current experience with dating. I often feel like I don’t have any blueprint for who I can become, and for what my dating life could be like. What could being a non-binary adult look like for me? I try to imagine it all without much guidance, which leaves me feeling discouraged and lost.

It’s also important to recognize that the majority of non-binary characters on TV and in film are white. According to GLAAD, only 52 per cent of LGBTQ+ characters on television are people of colour. The white-washing of non-binary lives and identities is more than a lack of diversity: it displays a disregard for the rejection of the gender binary that has existed for centuries in many non “Western” cultures, and it ignores the role that colonialism has played in reinforcing the gender binary. Artist Rudy Loewe spoke about the importance of Black non-binary representation in an interview with i-D, saying that “art can be a lifeline for people who are otherwise living in isolated environments, so it can be extremely important to find those points of reference.” The hiring of mostly white non-binary writers and creators also leads to the depiction of non-binary characters of colour who embody white ideas of androgyny, erasing the diverse gender experiences of people of colour.

So, what do we do when we don’t see ourselves enough in the media? We make things for ourselves. While Tumblr was the DIY hub for queer kids when I was a teenager, TikTok now has a huge community of non-binary sapphics (sometimes called nblw, for “non-binary loving women”). Popular TikToks include jokes about lesbians having a complicated relationship with gender, comedic attempts to describe gender without using traditional labels, and funny videos about your family knowing you were gay before you did. It’s a dynamic community that makes me feel seen, and it follows a long history of media-making by gender diverse sapphics, who have found a sense of kinship in the creation of zines, podcasts, and more major works like Stone Butch Blues. It’s powerful and important for us to make our own media, and I know that the communities on TikTok will help many people the way that Tumblr and YouTube helped me.

That being said, these online communities do come with certain risks. Many past bloggers have suggested that although Tumblr allowed many like-minded people to connect in 2016, there was often a lot of pressure on teens to commit to a specific identity label, and for them to figure themselves out before they felt ready. Having your coming out journey on a public platform can be really difficult – I worry that these pressures will continue to be a problem on TikTok. As many young TikTok users have begun to articulate, the demand for answers to personal questions about pronouns, sexuality, and gender identity is difficult for those who might want to try out certain labels online, but who aren’t ready or able to come out in their personal lives. This concern is particularly apparent on this new platform in a way that it wasn’t on Tumblr, where people like me were lucky to experience relative anonymity instead of using our own likenesses to get views.

Everyone deserves to see their reality reflected. I want kids to be able to see genderqueer students in a picture book. I want teens to encounter non-binary adults on their favourite sitcom. I also want to see more sapphic characters that exist for something other than the male gaze; couples that aren’t made up of two conventionally attractive femmes; lesbians who don’t use she/her pronouns; asexual lesbians and elderly lesbians. Here’s hoping for a new generation of representation, beyond the margins of the Internet, that non-binary folks like me can look up to.