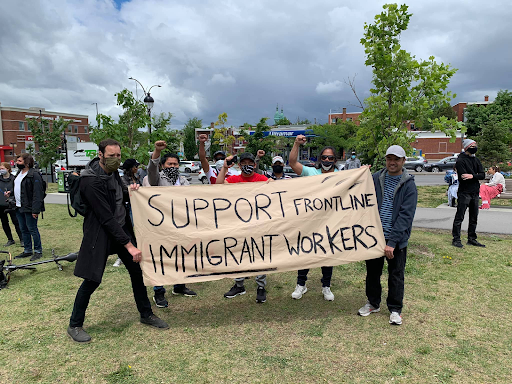 In June of this year, the Immigrant Workers’ Center (IWC-CTI) held one of its many press conferences. Community organizers and workers outlined their grievances about working conditions in Dollarama’s warehouses, which have only gotten worse since the outset of the pandemic. The IWC is, by their own definition, a “labour education and campaign centre” which has recently been focusing on the labour conditions of warehouse workers in Montreal.

According to Mostafa Henaway, an IWC organizer, “many people view Dollarama as a sort of ‘mom-and-pop’ operation, that it’s simply a dollar store.” Yet he pointed out that “it is actually one of the largest corporations in Quebec and Canada, [which] employs at least 20,000 workers and operates over 1200 stores from coast to coast”, and has also begun to expand into Central America. He added that its owners, the Rossy family, are worth $2.5 billion, making them one of the richest families in Quebec and in Canada.

Immigrant Workers Centre weekly distribution of supplies and leaflets outside the Dollarama warehouse in Montreal.

“Dollarama is our Amazon”

“Unfortunately,” he added, “Dollarama is able to maintain low prices across the board because of the conditions workers face in its distribution centers and in its stores, only to ensure that Dollarama continues to reap in large profits.” Henaway insists that in the Canadian context, “Dollarama needs to be a focus for us, in the same way that Amazon is a focus for the labour movement around the world. We’re making the argument that Dollarama is our Amazon.”

Joey Calugay, another member of the IWC, also spoke at the press conference. Calugay explained that many of the workers in Montreal’s warehouses are newly arrived immigrants or asylum seekers, older immigrants who are supplementing their income, or undocumented workers who’ve lost their status and are trying to re-establish their legal right to stay in Montreal. According to the Montreal Gazette, immigrants made up to eighty per cent of warehouse workers in the Montreal metropolitan area in 2019.

Mohammed Barry is a Guinean refugee who has been active in the campaign to prevent Canada’s deportation of exiled Guineans to a dangerous fate in their home country, in addition to his labour organizing. In the same press conference, he stated that he worked at Dollarama for two weeks, in “deplorable” conditions. “There is no respect [for the workers]” he said, “and the contamination of the air [with Covid-19 in the warehouses] is enough to traumatize employees.” In his time at Dollarama, he claims he experienced large numbers of workers that were packed together in such close proximity that it was impossible to maintain any kind of social distancing.

In addition to a lack of Covid-19 measures, Barry added that there was no adequate training provided to new employees in order for them to carry out their work safely. Instead, he said, workers are given rapid, minimal training, and are made to work as fast as possible. When Barry was injured at work, he recounts that his manager simply instructed him to wipe the wound and get back to work. Only when Barry threatened to call the police did the management treat his wound and allow him to go to the hospital himself. As for calling an ambulance, he noted that the unspoken rule was that “anyone who tries to call one to the warehouse would be fired.”

Another former Dollarama employee, Gaurav Sharma, is an artist from Chandigarh, India, who came to Montreal in 2019 and is awaiting a decision on his refugee status claim. Hired by Di-Geo International, a temporary employment agency, he was assigned to Dollarama for almost a year as a palette builder. The long hours – at least 8 hours a day, including a half hour lunch break and a 15 minute bathroom break – and the quick pace of the physically strenuous work eventually resulted in severe back pain for Sharma. When the first instances of searing pain hit him, Sharma recalled, the warehouse had “no medical staff, no first aid kit and no painkillers available”, so he had to find a doctor himself, and was prescribed 2 weeks of bed-rest. When he asked to be reassigned to a less physically strenuous task due to his injury, Shamra said, the employment agency insisted that “no transfer was possible,” leading Sharma to quit in order to avoid aggravating his injury.

In 2019, the IWC published a report based on group interviews and surveys with 50 workers in Montreal warehouses and distribution centres, including Dollarama facilities. The report decried “a business model within the logistics sector that is based on the hyper-exploitation of a work force largely composed of migrants.” It found that nearly a quarter of warehouse workers throughout Montreal have suffered injuries at work. The majority of these workers are given zero sick days, and nearly 40 per cent received no health and safety training at work, according to the same report. It also states that “almost 60 per cent of workers said they were paid less than a permanent worker doing the same job. 10 per cent were paid under minimum wage, 16.5 per cent worked more than full time, and almost half said they did not have proper safety equipment or sufficient training.”

The role of temporary placement agencies

Former warehouse workers like Barry argue that temporary placement agencies aggravate many of the issues within this system – they act as the official employers of many warehouse workers, thus allowing Dollarama to avoid providing them with proper benefits or protection. According to Jon Milton writing for Ricochet, “such an arrangement makes for extremely high turnover, and makes organizing into unions nearly impossible from a legal standpoint.” Henaway emphasizes that “90 per cent of people [that] work through agencies, it’s their first job in Quebec, they’re refugee claimants or failed refugee claimants that could be deported, all of that stress makes it difficult to organize.”

According to labour organizers like Henaway, this lack of labour protections has not only devastated Dollarama workers’ health and safety, but also their freedom to protest for better conditions. In the beginning of the summer, Henaway said that “workers were fired for speaking up against the conditions in the Dollarama warehouse,” or even for signalling that there were Covid-19 outbreaks inside the warehouse.

Former warehouse worker Gaurav Sharma performs a short play about his Dollarama experience at a protest in August.

Since the beginning of the pandemic, the IWC and its allies have been holding press conferences and demonstrations, as well as flyering, to demand adequate health protections for warehouse workers, and the maintenance of bonuses for all workers who are considered “essential service providers” in the context of Covid-19 shutdowns. In May, 135 local Montreal artists signed an open letter in support of the IWC’s campaign. According to Stefan Christoff, an artist and activist speaking to the Daily, “DJs have made mixes to draw attention to the struggle, while some visual artists have created prints, that are now up in the city to draw attention to the issue.” Christoff and other activists have also supported the effort by attending the IWC’s weekly outreach sessions near Dollarama warehouses, in order to “distribute masks, water, juice and share flyers that detail labour rights” to warehouse workers on their way to work.

Through a combination of physical rallies, press conferences and media coverage, workers and labor organizers have so far succeeded in their efforts to pressure Dollarama into maintaining hazard pay for all its employees. In March, store workers were given 10 per cent wage increases, and warehouse workers had seen their wages increased by up to $3 per hour. With the second wave of COVID-19 looming in the fall, the company had announced it was cutting the bonus pay at the end of August. Workers swiftly reacted by organizing a rally on August 20 near Dollarama’s main warehouse, which included speakers from trade unions, community groups and elected politicians as well as Dollarama workers. A week later, the Immigrant Workers Center announced: “Multi-million dollar giant Dollarama has stepped back from its previous position to restore bonuses for workers providing essential services in its distribution centers and stores.” In their statement, they congratulated the efforts of Dollarama employees, praising the fact that they “were able to push back the company’s plan to end risk premiums”.

Although the now reinstated bonuses of $1.50 are lower than the $3 bonuses warehouse workers previously received in March, the IWC’s Facebook statement claimed that this modest increase “brings their hourly wages closer to the $15-per-hour minimum wage that workers in Quebec are fighting for.” What’s more, these bonuses are scheduled to remain effective until November.

This Saturday, October 31, the IWC, Howl Arts and the Association des travailleurs/euses temporaires d’agences de placement (ATTAP) will be hosting a protest in solidarity with the continued struggle of Montreal’s temporary workers. In addition to demanding the continuation of hazard pay after November 1 and permanent employment for Dollarama workers, the rally’s organizers say it will address “the limited regularization program” put forward by the federal and Quebec governments regarding immigrant workers, which “excludes the vast majority of people who continue to do essential work, and also deserve status.”