Another Nickel in the Arts Funding Jar 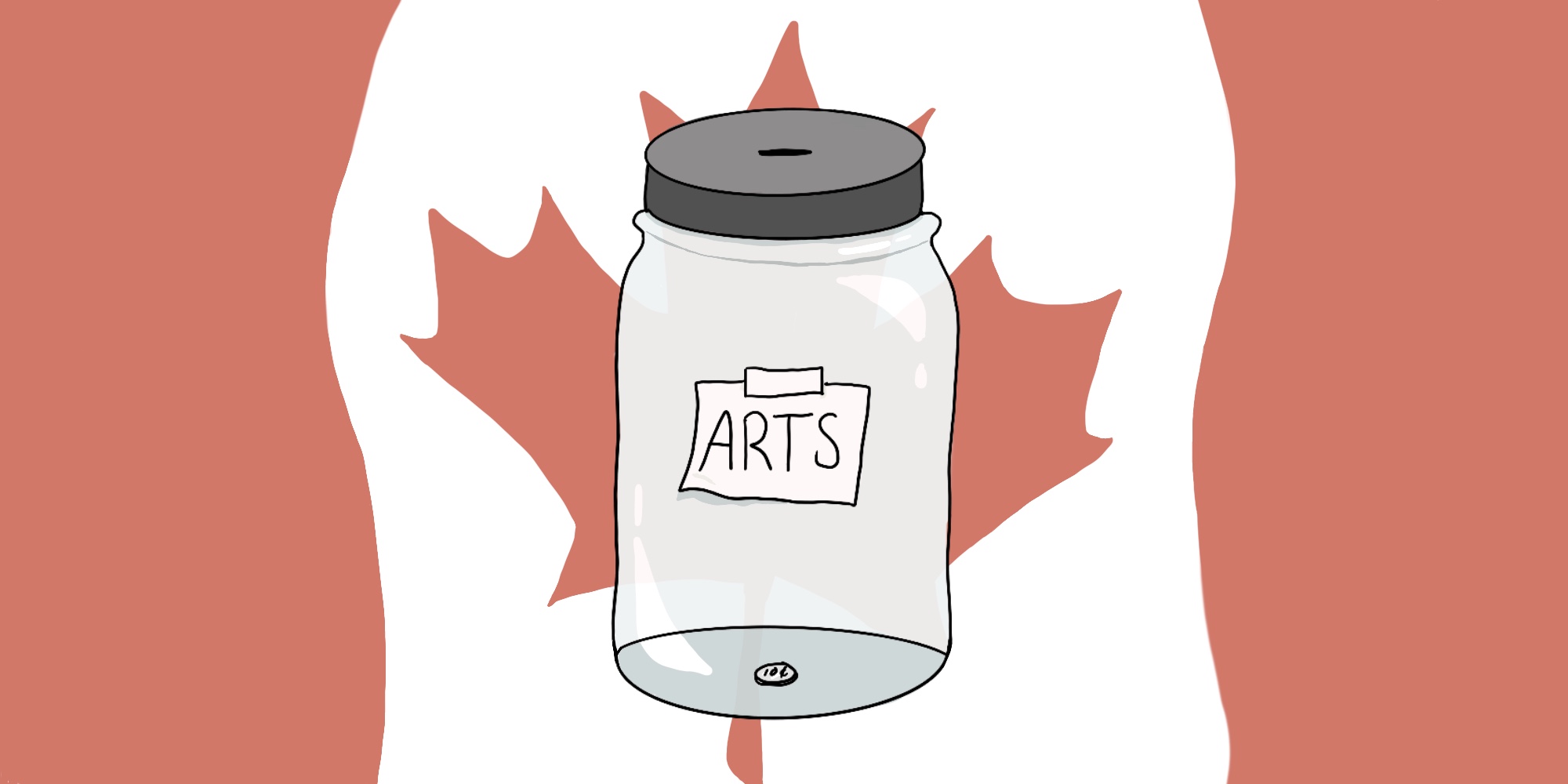 On the morning that followed Schitt’s Creek’s historic sweep at last month’s Emmy Awards, my social media feeds were flooded with reposts of The Beaverton’s satirical article, “Schitt’s Creek Emmy sweep inspires Canadian government to add another nickel to arts funding jar.” The Dan and Eugene Levy-helmed series, about a formerly wealthy family that relocates to a town they once bought as a joke, broke the record for most awards won by a comedy in a single season. It became the first show to sweep all four acting categories, making the fictional Rose family into Canadian small screen royalty. While I got a kick out of The Beaverton’s article, I also find that it speaks to an unfortunate truth about the state of Canada’s arts industry; despite their creativity and resilience, Canadian creators and arts institutions still have to bargain for every dollar of funding they receive.

Schitt’s Creek’s path to international success raises some important questions about Canadian arts funding, which has been unable to match the growing number of artists and organizations seeking government support since the 1990s. The series is actually a little less home-grown than the average Canadian may suspect – Schitt’s Creek could not have achieved its level of recognition without an American network and audience. When Eugene Levy and his son Dan Levy began pitching their project to television networks, they faced rejection from large American companies before finally getting picked up by the Canadian Broadcasting Corporation (CBC). The national public broadcaster’s existence is, however, constantly being threatened by cuts to federal funding; most recently, these cuts were advocated for by the new federal Conservative Party leader, Erin O’Toole. Since the CBC couldn’t foot the entire bill for the show’s debut, the Levys sought out an offer from the midsize American cable network Pop TV, and Schitt’s Creek ended up premiering in both the States and Canada in 2015. Viewership was modest until the Schitts and Roses found their way to American Netflix in 2017, at which point ratings exploded.

Schitt’s Creek undoubtedly also benefits from its ambiguous setting. Although Dan Levy has admitted that the fictional Schitt’s Creek is a small town in Canada, that fact isn’t obvious to viewers. Other than the occasional reference to cities like Vancouver and Montreal, the show omits direct cultural signifiers, and many of my non-Canadian friends are surprised when they learn that Schitt’s Creek isn’t American. Yet, when the series set a new Emmy record, the CBC and other Canadians took to the Internet to praise the show. The CBC’s president and CEO, Catherine Tait, wrote in the Toronto Star that “[t]his great show exists because of Canada – a country that values ideas like decency and acceptance; a country that provides financial support to Canadian shows through the Canada Media Fund; and yes, a country that has a national public broadcaster whose mandate is to find, invest in and promote these stories.” Ontario premier Doug Ford added on Twitter that, “Ontario is proud of [the cast]. Fun fact: Schitt’s Creek was filmed in Goodwood and Toronto #OntarioMade.” Schitt’s Creek already has an extensive collection of Canadian Screen Awards, so this revelling and back-patting in the wake of its success at the American Emmy Awards feels a tad ironic. A series which intentionally concealed its Canadian identity is now the greatest pride of Canadian television since The Beachcombers, which premiered nearly half a century ago.

But why shouldn’t we celebrate these Emmy wins? It’s no secret that recognition in the United States is often a TV show’s greatest achievement. The Levys knew that they could make Schitt’s Creek successful by having an American network cover costs, by intentionally keeping their setting vague, and by getting American Netflix to provide the series’ ultimate launch to fame.  As a fan, I’m proud of Schitt’s Creek’s newfound cult status, but I’m also disappointed that this show, which I would love to consider a symbol of Canadian artistic achievement, is really no such thing. If anything, Schitt’s Creek is a testament to the Canadian government’s continued lack of support for the arts.

If Canadian superstar Eugene Levy struggled to find the local funding to produce his show, which has an all-white central cast, how can other Canadian artists, especially artists of colour, expect to receive support for their own projects?  Like Schitt’s Creek, the sitcom Kim’s Convenience features an entrepreneurial family with two grown children – in this instance, a Korean-Canadian family running a corner store in Toronto. The series premiered on the CBC  only a year later than Schitt’s Creek, but it’s marketed as “the show to watch once you’ve finished binging Schitt’s Creek.” Perhaps it wouldn’t be if its creator, Ins Choi, had the same bargaining power in the States as the Levys, and if the show had a mostly white cast.

Kim’s Convenience is just one example of artists of colour being systemically disadvantaged within the Canadian arts scene. When determining which arts institutions will receive federal grants, the Canada Council for the Arts continues to use a metric of “artistic excellence.” Many consider this criterion exclusionary to artists who aren’t white men, because art that is seen as “legitimate” in the West has historically been male and Eurocentric. Take, for instance, the prevalence of Mozart and Verdi in Canada’s opera houses, despite the wealth of fascinating new indie opera that is being produced by composers with diverse racial and gender identities. Though the Council has implemented certain measures to provide support for traditionally underfunded groups, in particular Indigenous artists, funding is still unevenly distributed across Canada’s vast geographic regions. Canadian arts organizations continue to survive from project to project. And it will only get worse, given the economic effects of the global pandemic, which will inevitably shrink the small piece of the federal pie devoted to arts funding.

Schitt’s Creek is excellent television, but it’s not perfect. I love how the show balances ridiculousness and truth, with nuggets of poignant sincerity just around the corner from expertly crafted laugh-out-loud moments. Its characters are all people we’ve encountered before, whether in our own small town diners, or in the reality TV we watch as a guilty pleasure late at night.  Schitt’s Creek also does right in the romantic storyline between characters David (Dan Levy) and Patrick (Noah Reid). According to a letter penned to the cast by a group of 1,800 mothers of queer children, the series “will serve as a catalyst to help change the world into a kinder, safer, more loving place for all LGBTQ people to live.” But the cast’s obvious lack of racial diversity is ultimately a detriment to what could have otherwise been a fully-rounded depiction of Canadian – or, in this case, broadly “North American” – life.  Perhaps Schitt’s Creek’s smashing success will open the door for more empowering stories about marginalized communities. With the power to make important social change, while also keeping audiences in stitches, one can only hope that Schitt’s Creek lands more than just a nickel in that pesky arts funding jar.