13 Spooktacular Movies to Get You Through Lockdown 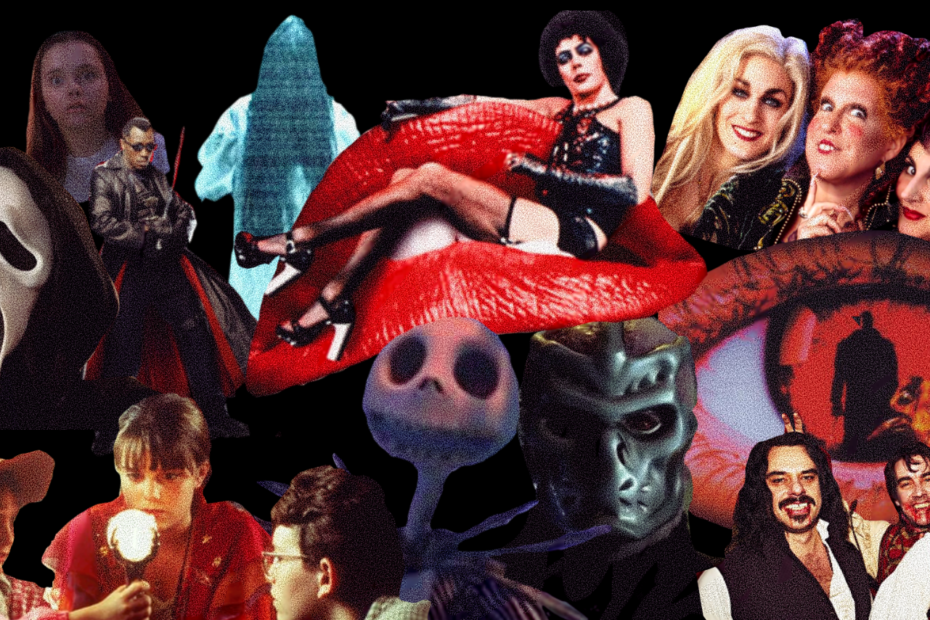 This October has been a genuinely spooky time. Ghouls, Gremlins and all sorts of hollow-eyed, anthropomorphic creatures have been wandering the misty streets of the Old Port, ready to jump out and shout, marks for Quiz 2 updated! It really is the perfect week to indulge in some super nostalgic Halloween movies. Here are 13 films to distract you from all the horror around us right now.

Grab your lipstick, put on your heels and do the time warp. This 1970s cult classic is the perfect film to transport you away from the Red Zone and into the colours, couture, and chaos of Transylvania . Put on some tap shoes, clean up your house, and dance-along to the campiest, glampiest horror movie you’ve ever seen. Rocky Horror was ground-breaking in its depiction of gender identity and sexuality, making it the quintessential queer film for Halloween.

The treat to your Halloween trick, Candyman is a hilarious trick-or-treating movie about kids running away from an evil orthodontist after eating too much candy. Just kidding! it’s actually about an evil spirit who violently decapitates a dog. Candyman is a certified classic, and if you’re big into saving the bees or just want someone to cuddle, go look into your mirror and say his name five times. Prepare to be hooked.

Ringu Starr! Haha, no silly! That’s the Beatles. Ringu is a genuinely terrifying movie about a spirit that passes from victim to victim via a haunted DVD. Arm yourself with Netflix/Amazon Prime/HBO Max/CBS All Access/Youtube Premium, or if you’re really in a ghostly mood, Quibi (RIP), and get screaming.

Step back in time to 2008, and remember why you were definitely team Edward – Robert Pattinson is literally God’s gift to Earth. Can you hear your roommate having COVID-friendly cyber-sex every night? Trade in your cohabitation woes for the epic rivalry between Team Jacob and Team Edward. By the way, if you are Team Jacob, stop reading this list right now and go away. For all of you on the right side of history: grab some popcorn and hold on tight spider monkeys, as you watch this vampire-centric romance/baseball movie.

A group of roommates who only go out at night dressed as pirates to pick up unsuspecting young virgins? Where in the Plateau is this? Māori directors Taika Waititi and Jemaine Clement deliver a hilarious sendup of both the vampire and mockumentary genres. You’ll laugh, you’ll cry, you’ll realize becoming a vampire is the Next Big Thing.

Tag along for this Halloween comedy classic about three old women trying to suck the life force out of a child to maintain their eternal youth. This film is a whole lotta witchin’ fun for you and your roommate Cynthia, whom you hate. Whether you’re looking for comedy, horror, or a CGI cat who just wants to die already, you’ll have a blast watching these iconic witches take on the 20th century.

In the words of Wes Craven, director of Scream, “AHHHHHHH.” Are you a fan of loud noises that come in droves? Then scream along to this Halloween classic. If you feel unsatisfied by the lack of screamtime, well, that’s on you.

Don your sunglasses, grab your duster, and sharpen your katana for a superhero-horror extravaganza released before Tom Holland was in diapers. Blade is a fantastic movie to get that roommate frustration out of your system, as you imagine Wesley Snipes destroying all of their electronic devices. Take that, Cynthia!

This movie freaked me out so much as a preteen that I slept in my parents’ room for an entire year. Zoinks! Scooby-Doo franchise is required viewing for this spooky season, no matter which film of the franchise you watch. However, no other movie has scarred me the way Scooby-Doo Zombie Island has.

People are mean, but ghosts are friendly!? This philosophical subversion is what drives the mid-90s nostalgia-fest known as Casper. You’ll be enchanted by Casper’s wholesome demeanour as he seeks to conquer the life-death divide to fall in love with a girl who has recently moved into a house he’s been haunting. If you’re looking for a movie that leaves you feeling good about the world once the credits roll, Casper is the ideal choice.

The Citizen Kane of Halloween movies, Jason X takes the already genius Friday the 13th franchise to space. A predecessor to Among Us, Jason X is about a group of teens in a space station that are picked off one by one by everyone’s favourite serial killer, Jason Voorhees. One stand out moment in this film is a scene where a character screams, “This sucks on so many levels!” as she is absorbed into the vacuum of space, something you sure wish would happen to Cynthia. Where’s a void when you need one?

The Nightmare before Christmas (1993)

The Nightmare Before Christmas is a near-perfect movie; the animation is beautiful, the musical numbers are classic, and the fusion between Christmas and Halloween makes it perfect for Montreal’s early winter transition. It’s just right for a virtual movie night with your friends. But there is one significant issue in the film: the lack of Jewish holidays. Seriously, Tim Burton? No Hanukkah cat? Also, there are more skin tones than grey.

One name: Debbie Reynolds. Suppose that isn’t enough to convince you. In that case, there’s also a character who refers to himself as “The Big Cheese,” and a competent politician named Kalabar – yes, he is evil, but also, he has a top hat! This movie is soaked in early 2000s nostalgia. If you miss watching the Family Channel and YTV, and if you even kind of miss Cynthia – who finally moved out after she found her laptop mysteriously destroyed by a katana – the only cure for your longing heart is Halloweentown.