“Till all are free, none are free” 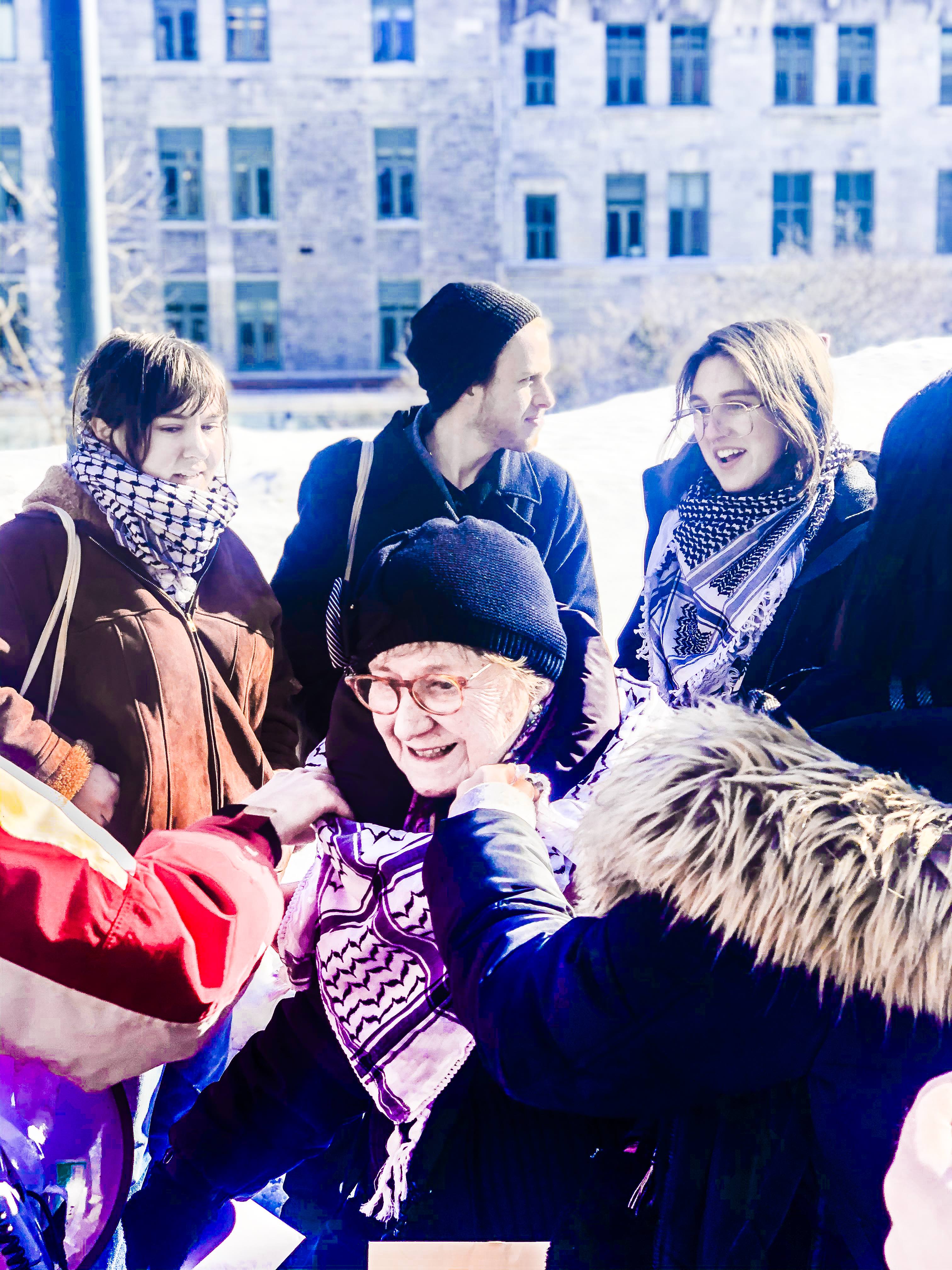 Ahead of Suzanne Weiss’ talk at Concordia, members of SPHR and IJV, as well as Weiss herself, gathered outside of the James Administration building on Monday, February 17, to call for open and free discussion of Israel-Palestine on McGill campus. Surrounded by students holding a banner that read “STAND AGAINST OPPRESSION – STAND FOR JUSTICE IN PALESTINE,” Weiss read aloud a letter addressed to Deputy Provost of Student Life and Learning Fabrice Labeau. Her speech referenced Labeau’s letter to the McGill community on December 2, 2019, and raised concerns with the “irresponsible accusations of antisemitism” following the campus debate regarding free propaganda trips to Israel. “I find no evidence of antisemitism here. What I see is a passionate debate on the politics of Israel-Palestine,” Weiss said, voicing her “alarm” with the “unfounded charges of antisemitism.” Weiss added that the suppression of these discussions “put[s] Jewish people at risk by weakening our ability to focus on genuine acts of antisemitism,” and leaves Palestinians to “face an implacable attempt to silence them entirely.”

Organizers with both IJV and SPHR also denounced the administration’s “attempts to stifle student activists” on campus. Speaking to the debate around the free trips, they criticized Labeau’s presentation of Jewish students as a “monolith” and his “conflation of anti-Zionism as antisemitism,” highlighting Labeau’s call for “ensuring respectful debate on campus.” Both spoke to the common ground that Palestinians and Canadian Indigenous peoples share in their “vibrant fights against settler-colonialism,” emphasizing the need for solidarity and the prevention of “willful ignorance” on campus.

After directing their words towards the James Administration building, members of SPHR and IJV presented Weiss with a keffiyeh from Palestine. Followed by both groups and attendants of the demonstration, Weiss entered the lobby to present Labeau with a physical copy of her letter. While the group waited, chants of “Solidarité avec la Palestine” continued. Eventually, Labeau’s secretary agreed to see Weiss, but only if the rest of the gathered students left the building and waited outside. Initially, security refused to let anyone besides Weiss remain in the building, and IJV and SPHR had to request multiple times that one person stay to assist her, as she is hard of hearing. Though Weiss was originally told she would be able to meet with Labeau in his office, she instead was met by his secretary and communications coordinator, and was not allowed past the lobby.

Weiss was successful in delivering the letter, and although she did not get to hand it to Labeau personally, she affirmed that she made her feelings clear to the administration. She exited the building back into the Community Square to cheers from the demonstrators. As the group dispersed, Weiss thanked the gathered students for attending, commending their efforts to fight for the rights of Palestinians and Indigenous peoples of Canada.