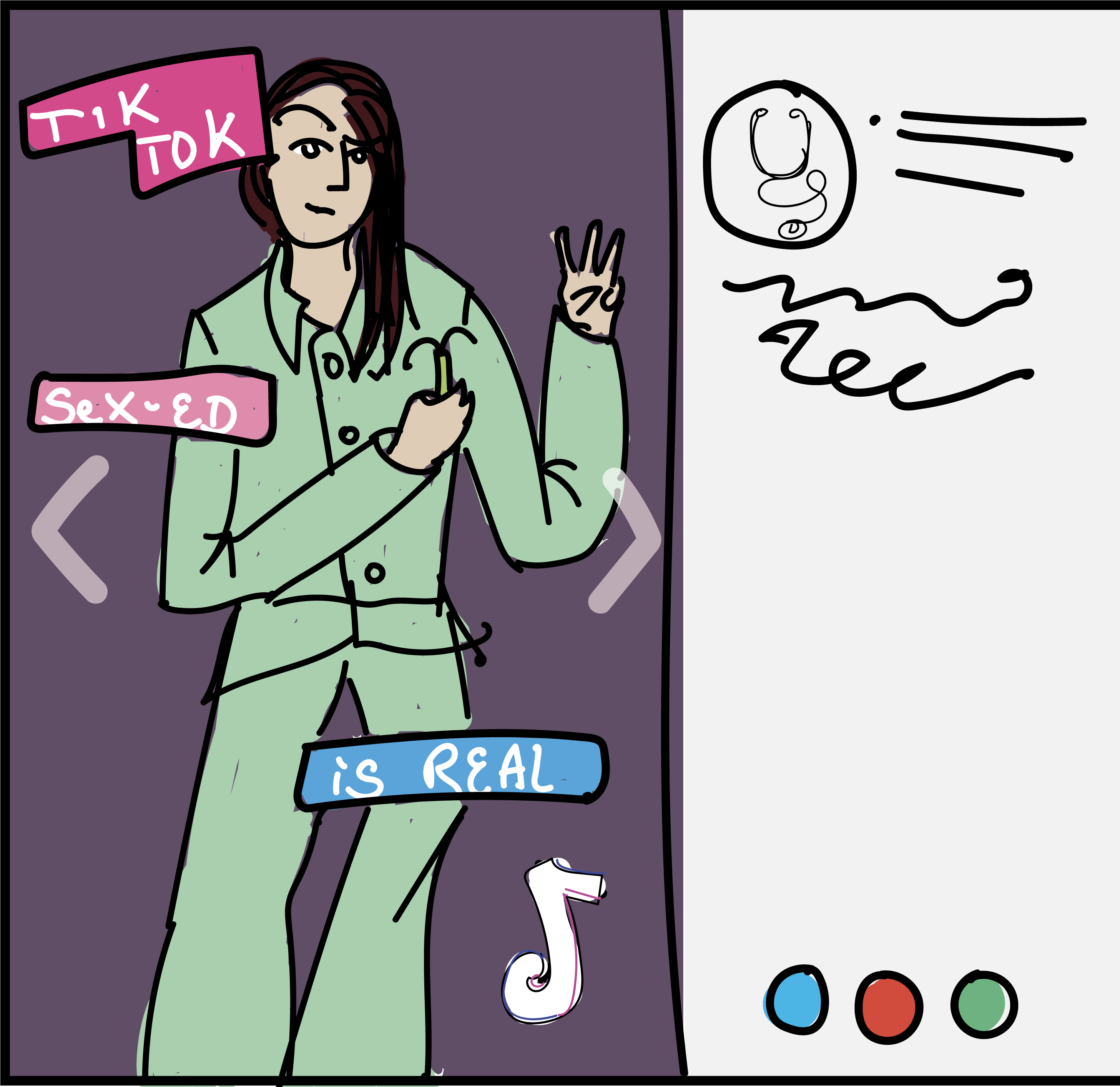 TikTok is ‘in’ right now. Anyone you know under the age of 30 probably has an account, and trademark dances developed among users on the app, like the ‘Renegade,’ have become ubiquitous on social media. What is less expected, though, is the increasing use of the app as a platform for sexual education.

Since fall 2019, the hashtag #obgyn has been gaining massive popularity, as the hashtag is being used by physicians to share information about pregnancy, birth control, and other aspects of sexual health in a non-traditional fashion. Popular contributors include @dr.staci.t and @mamadoctorjones.

In a climate where educational systems and medical providers hold the authority on providing information about sexual health, which often leads to abstinence-only education and other forms of censorship, these TikToks allow young people to access methods of alternative education. In an interview with the Daily, Dr. Jennifer Lincoln (@drjenniferlincoln), another popular ‘TikTok gynecologist,’ explained that “in the United States, only 20 states have laws that require students to be taught about contraception. Only 8 states require that consent be discussed. Abstinence-only education is what many kids get when it comes to ‘sex education’ – which we know doesn’t delay the age when teens have sex, but leaves them completely uneducated and unprepared for when they do! Basically – health classes in schools are failing our kids and teens. My TikTok account aims to fill in lots of those gaps so teens can make educated, informed choices. Sex is not shameful, knowing how our bodies work is not shameful, and I aim to amplify those messages.”

While some may argue that the videos posted in #obgyn are not necessarily activism in and of themselves, they fulfill a critical role of what technology and gender justice scholar Rosemary Clark called ‘hashtag activism,’ by “informing activists, […] diffusing political frame-works, […] decentralizing leadership, […] and decreasing the costs of participation.” These videos are therefore a form of consciousness-raising. Oftentimes, young women and non-binary people are told that they should not engage in sexual intercourse or use birth control by people including parents, teachers, and healthcare providers. By providing accurate, unbiased information and being available to answer questions on new platforms and in unconventional ways, these doctors are subverting traditional notions of adolescent sexuality and creating new ones.

After seeing doctors speak about sexual health on the app, young users have also begun to produce their own sex-ed TikTok content. These discussions often centre around their personal experiences with sexual health and birth control. Popular “sound” trends like “IUD check” and “implant check” let young people share accounts of using different forms of birth control and help peers make informed choices about their reproductive health. Other TikToks are more casual, including messages that destigmatize birth control or even just remind others to take their pill. The information about birth control and intrauterine devices provided by these doctors have not only informed young people but have empowered them to engage in their own activism regarding access to sexual health services.

However, it’s important to realize that even while sex education is becoming more freely accessible through apps like TikTok, this does not necessarily translate into effective help for those who cannot access medical support and treatment. Intrauterine devices, and many other forms of birth control, are not covered by public healthcare plans in Canada or the United States, meaning that only those with private insurance or the ability to afford the devices can use them.

Furthermore, TikTok is embedded with technological bias, which limits certain demographics’ ability to engage with this movement to make sex-ed more accessible. A number of users from marginalized communities are being targeted by this account and video purge, they are unlikely to further engage with the app and therefore cannot be reached by the content on TikTok. In December 2019, The Verge reported that TikTok has been suppressing content by creators with disabilities, LGBTQ users, and fat creators in an aim to “protect users with a high risk of [being the target of] bullying.” A number of TikTok users have posted videos stating that they have had other videos with LGBTQ+ content deleted. However, even their videos describing the issue have been systematically removed by the app. This suppression has not just targeted marginalized communities, but has also censored the educational sexual content these physicians put out. Dr. Jennifer Lincoln told the Daily that her first TikTok was censored, saying that “What bothered me most is that TikTok allows explicit lyrics… but words like ‘vagina’ and ‘sex’ are a problem?! They never replied when I tried to find out why that TikTok was censored.” This follows in the phenomenon of shadow-banning, “the act of blocking a user’s content online such that the user doesn’t know it’s happening.”

Sexual education is not the only form of activism that is being carried out on TikTok. The app is also being used as a platform to raise awareness about the colonial implications of the gender binary, police violence, and the inaccessibility of the climate justice movement, among many other issues. As Dr. Lincoln told the Daily, “If our little 15 second videos can open the door to more informed choices and empowerment, why wouldn’t we do that?”