The Future of St-Henri Site Contested 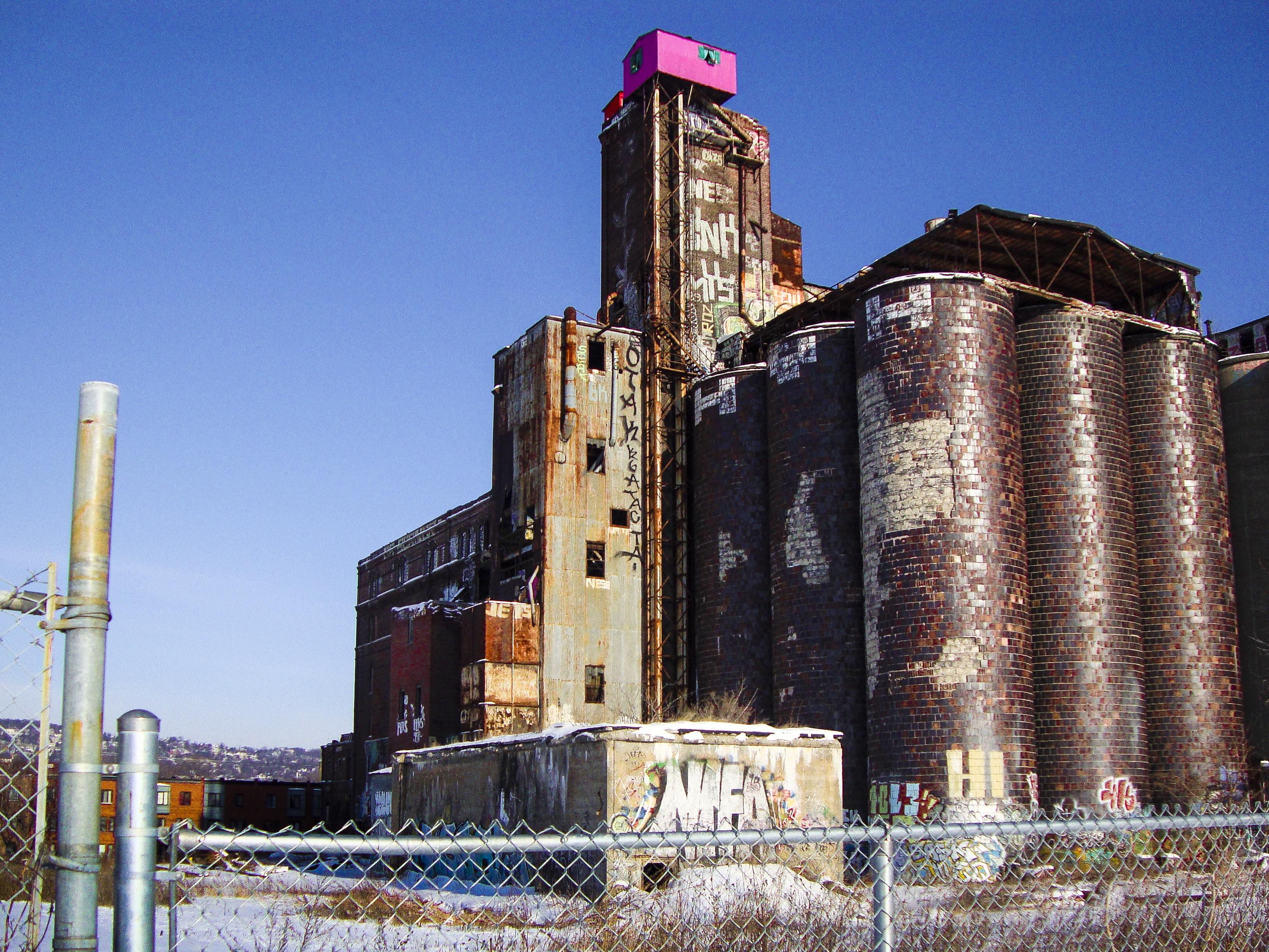 Two Montreal organizations are engaged in a struggle over the future of the former Canada Malting site in Saint-Henri – Renwick Development and a group of local residents called “À nous la Malting.” At the heart of the conflict stands two different visions of what kind of development is needed for the neighborhood. Renwick Development wants to build a mix of condominiums, social housing units, commercial services, and spaces for “community needs.” “À nous la Malting” wants a 100 per cent community-based social housing project and sees condominiums as a threat to Saint-Henri’s social fabric. Saint-Henri has seen an influx of luxury condominiums in recent years, as the availability of affordable housing has plummeted.

The hulking structure of the former Canada Malting is a familiar sight for residents of Le Sud-Ouest. Its decaying facilities have been abandoned since 1989, even though the location itself is of prime real estate quality, right by the Lachine Canal. This site “is very complicated” and presents “a ton of issues” as Julie Bélanger, director of the office of Le Sud-Ouest borough mayor Benoît Dorais, told the Daily. According to Bélanger, it needs decontamination, and it has historical value and components that need to be preserved and restored.

Noam Schnitzer tells the Daily he is confident that his group, Renwick Development, can take care of these issues and deliver a sustainable project, one where “the provision of the services would not depend upon government funding.” He is the founder and developer of the company, and is responsible for the Malting site project. He presents his vision as “an inclusive project, open for everyone.” The site is currently owned by Quonta Holdings, an investment management firm.

Schnitzer plans to build “a total of 240 units, of which 80 will be social housing units, and the rest will be condominiums.” With regards to the social housing units, he intends to construct them in a separate building on a vacant spot of land. The remainder of the square footage would then be divided between commercial spaces and a collaborative workspace for artists, among other things. According to Schnitzer, the social housing units will be tailored to the needs of the community, which is “not a homogenous scenario; the need is actually for family-centric social housing units.” He intends for most of them to have two or three bedrooms. But 80 social housing units are “not even close to enough,” according to Shannon Franssen, coordinator for Solidarité SaintHenri, a coalition of community groups active in the neighbourhood. She tells the Daily that Saint-Henri needs at least 500 new social housing units, a number that the group arrived at by looking at the number of households who spend more than 50 per cent of their income on rent.

Schnitzer feels like Renwick Development would do more than its fair share, going “well beyond” municipal requirements in terms of the proportion of social housing units. But Franssen insists: “We need to maximize the use of the vacant land that is available;” otherwise the needs of the community won’t be met, she says. Solidarité Saint-Henri supports “À nous la Malting,” a collective of residents and local community organizations founded in 2017 who is working on a project “that would involve 200 social housing units.” Franssen says that technical questions still need to be addressed, but that more information should be available in the next few weeks. A public presentation is scheduled for March 3, and the city expects a business plan and a feasibility study by the end of February.

City officials seem both enthusiastic and worried about this project. “We hope to see actual numbers,” Julie Bélanger tells the Daily. “If they have a sustainable business plan, we will support [the collective], but we have not yet seen this” in the previous progress reports.

Elected officials funded the collective and gave it over a year to come up with a proposition. One thing that seems clear is that the City of Montreal is not going to buy the property: “We don’t have the means to buy it, and it wouldn’t be responsible to do so,” according to Bélanger. However, she recognizes the need for affordable housing in the area. “Le Sud-Ouest is the borough with the lowest rate of vacancy in Montreal, [at] under one per cent,” she admits; “it’s a big problem.”

The current municipal administration has pledged to create 12,000 new social housing units in Montreal, what Bélanger calls “a record number.” But to deliver this, the City has to think strategically. Given the difficulties presented by this site, the City claims the cost per unit would be extremely high. “They would probably be the most expensive social housing units in the country,” Bélanger says. “Financially, it wouldn’t be a responsible decision.”

Montreal is currently experiencing a 15-year low vacancy rate, now at 1.5 per cent, according to a recent report by the Canada Mortgage and Housing Corporation. As Bélanger underscored, the situation is particularly dire in Le Sud-Ouest, where the vacancy rate has dropped as low as 0.5 per cent. Such numbers naturally lead to concerns for low-income tenants who struggle to find – and keep – a decent place to live.

Amy Darwish, from the Comité d’Action de Parc-Extension (CAPE), is “very concerned that if there is no action taken, a lot of people could find themselves being homeless as of July 1” she tells the Daily. The CAPE is not directly involved, but supports “À nous la Malting” in their struggle. For them, it’s absolutely necessary to invest massively in social housing. “The crisis is twofold” she explains. “There are fewer apartments and the ones that are available are much more expensive.” This, according to Darwish, means that we are likely to see more evictions and more race-based discrimination against tenants across the city.

This reflects a trend noticed by Solidarité Saint-Henri in their neighbourhood. “There is such a high demand for rental units that people are willing to waive their own right; they’re willing to pay more to live in Saint-Henri,” Franssen tells the Daily. “This is what gentrification looks like.” According to her, part of the reason why housing is getting so expensive, “is because of real-estate speculation by developers like Renwick Development who want to build luxury condominiums on the canal.”

This is a concern that Schnitzer dismisses. “For renters, the term ‘gentrification’ doesn’t exist; rent is controlled in Montreal. Simply because someone builds next door doesn’t mean that your rent will increase,” he tells the Daily. In theory, the Regulation respecting the criteria for the fixing of rent does limit the possible rent increases in the province well below what a free market would allow – but this may not reflect what actually happens. Yet-to-be-published research done by Solidarité Saint-Henri shows that rent has increased by an average of 91 per cent in the neighbourhood since 1996, whereas, according to the group, “if the landlords respected the law, we would’ve expected an increase of about 45 per cent.”

This is a concern that Schnitzer dismisses. “For renters, the term ‘gentrification’ doesn’t exist; rent is controlled in Montreal. Simply because someone builds next door doesn’t mean that your rent will increase,” he tells the Daily. In theory, the Regulation respecting the criteria for the fixing of rent does limit the possible rent increases in the province well below what a free market would allow – but this may not reflect what actually happens. Yet-to-be-published research done by Solidarité Saint-Henri shows that rent has increased by an average of 91 per cent in the neighbourhood since 1996, whereas, according to the group, “if the landlords respected the law, we would’ve expected an increase of about 45 per cent.”

Renwick Development says that they are “in discussion with [Le SudOuest] and waiting for the approval process to begin,” while Bélanger says that “no project has been authorized at the moment.” The city has an informal agreement with “À nous la Malting” that nothing will happen until they receive the details of their plan. Whatever the outcome is, the next few weeks are likely to be crucial for the future of the Canada Malting site and the residents of Saint-Henri.