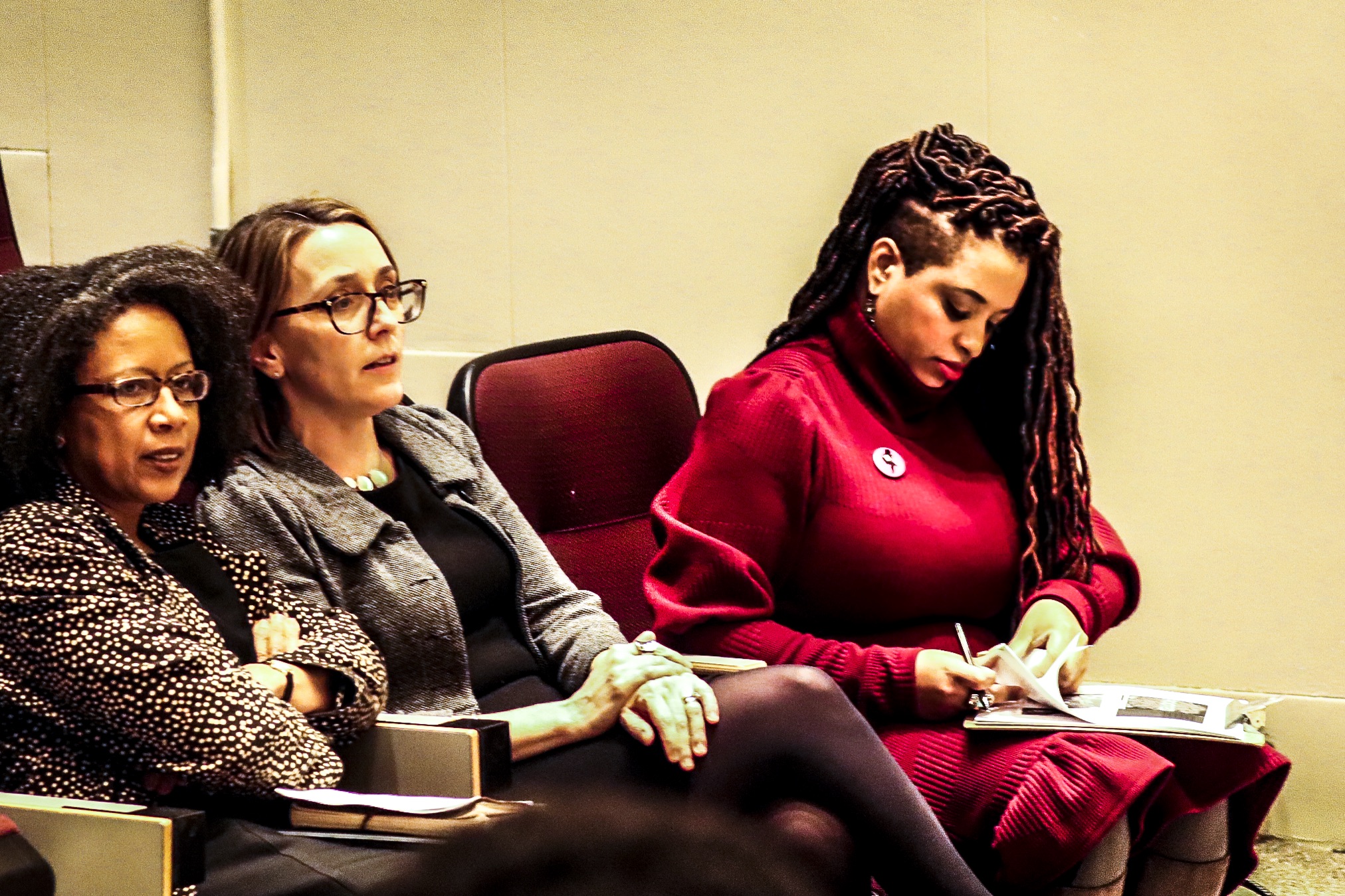 Shanice Yarde, Equity Education Advisor, and Janelle Kasperski, Indigenous Education Advisor, organized the opening of Black History Month at McGill on Monday, February 3, partnering with the Faculty of Law. Yarde, as Master of Ceremony, denoted the three words, that, as a Black woman in Tiohtià:ke motivate her work: “Indigenizing, decolonization, and reparation.”

Kasperski then spoke, reminding us of the importance of the solidarity between Black and Indigenous peoples and the work that still needs to be done.

Jennifer Maccarone, a Member of the National Assembly of Quebec of Westmount–Saint-Louis who is herself white, also made an appearance. “I see you and I hear you,” she claimed. Her repeating “I think of you as my roots” made the audience all glance at each other, simply asking why she would think such a thing.

“You all [the Black people? The Black people in the room? The two women of colour who had just spoken?] make me stronger” she affirmed.

Keynote speaker Dr. Greene’s work revolves around the intersection of hair and civil and human rights advocacy. Not only does she fight for her people in legislature, through the CROWN Act against racial discrimination through hair – but she does so by creating a net accessible to her community. She is the originator of the viral #FREETHEHAIR hashtag that every year brings the Black community together to denounce injustices of hair discrimination, such as the recent cases of Deandre Arnold or Andrew Johnson.

Dr. Wendy Greene evoked her South Carolina childhood as shaping the activist she is today. She reflected on the continuance of the Black struggle through the history of both her parents’ activism and her own.

“The personal can be professional; it can be political,” she said.

Hair discrimination happens in the workplace and in public environments and the law does not truly protect Black people from racial discrimination. Title VII of the US Civil Rights Act, the federal anti-discrimination law protects “hair texture” that is considered to be the afro, but not hair styles that include braids, twists, locks etc. This is because, apparently the constitution only acknowledges immutable characteristics as racial; in Dr. Greene’s own words, a “legal fiction.”

She also denounced the Equal Employment Opportunity Commission as unhelpful, since there is no law that recognizes race as a cultural feature, only as a bodily matter, hence the unfortunate nature of race as social construct.

Dr. Greene has been defending a few of the countless victims of racialized and gender-based hair discrimination. Her work encompasses people who were ordered to “fix” their natural hair with chemical relaxers, or to wear wigs as conditions of employment, graduation, promotion, and schooling; people who hear negative comments and bear humiliation daily, along with threats of discipline or even arrest when protesting, whether it is in the States, Canada, Australia, South Africa or elsewhere.

She also deplored the fact that this everlasting stigmatization is internalized by the Black community – how many times have we heard of bad versus good hair. The lingo used by the Black community to define the black body and hair shows this internalized hate of its roots. It reveals a hierarchy that was created in terms of who would have the most potential to have the straightest hair, the fairest skin.

“Before you’re even out of the womb, someone is already thinking about the texture of your hair and the opportunities that go with it.”

Dr. Greene managed to unite the audience in sadly amusing relatable situations such as hair deserts. She ended her speech on the note of health, mentioning the scalp and hair damages (burns, alopecia, increased risks of cancer) that the use of chemical relaxers brings. “Are we losing our livelihood or our lives?” she asked.

Singers Fredericka Petit-Homme, Myrtle Thomas, and Ruben Shaym Brutus, and steel pannist Mr. Pöng blessed the audience’s ears at the end of the ceremony, reminding everyone that Blackness is a constant struggle that is uniting, but is also a diverse and beautiful musical culture.

Black History Month is on at McGill until the end of February. For a full schedule of events, go to: https://www.mcgill.ca/equity/initiatives-education/black-history-month/bhm-2020-schedule-events