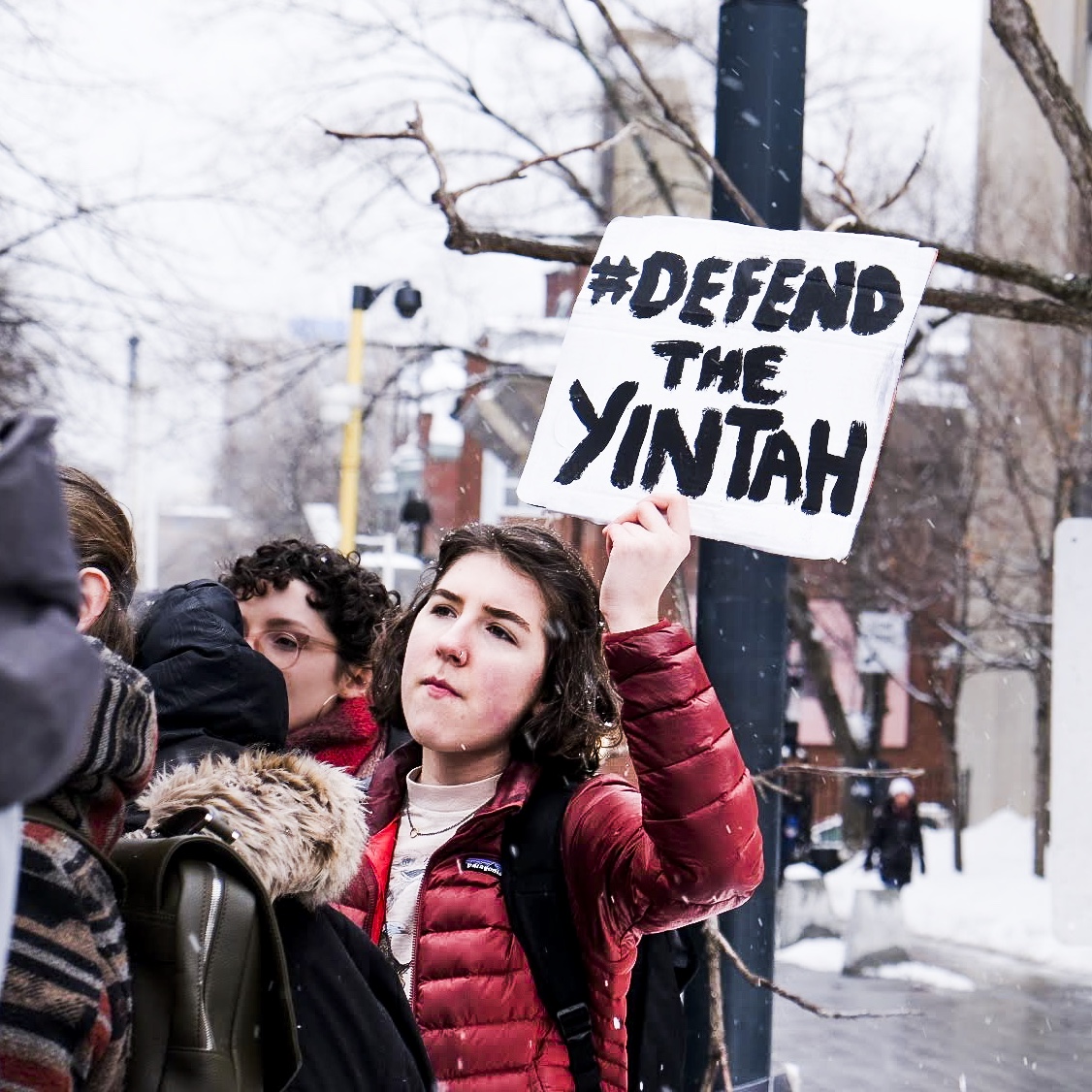 On February 13, Divest McGill and other allied groups congregated around the James Administration building, drawing a large crowd of students and faculty, despite harsh weather conditions. Organized as part of ongoing action against McGill University’s $6 million investment in TC Energy – the company behind Coastal GasLink (CGL) – the demonstrators called out McGill’s complicity in the construction of the CGL pipeline on the hereditary land of the Wet’suwet’en Nation. This rally addressed the wider issue of divestment, while also staging an immediate response to illegal raids by the Royal Canadian Mounted Police (RCMP) on Wet’suwet’en territory in British Columbia, joining demonstrations across the country in solidarity with the land defenders. Divest McGill sent a clear message, signaling to the administration that the McGill community does not accept its continued investment in the fossil fuel industry. The group demanded that McGill’s Board of Governors (BoG) “reflect the consensus of the McGill Senate, SSMU, PGSS, faculties, and McGill unions” by divesting the university’s endowment from fossil fuels, specifically from CGL and Teck Frontier – companies whose plans infringe on the land rights of Indigenous peoples in western Canada.

Divest McGill’s solidarity action aims to hold McGill University and its BoG accountable to its community once again. The BoG’s decision not to divest came up again in early 2020 when Professor Greg Mikkelson resigned in protest due to the University’s failure to divest from the fossil fuel industry.

Christian Favreau from Climate Justice Montreal spoke at the rally, stating, “McGill is funding the RCMP raids on Wet’suwet’en territory. Considering that the McGill BoG’s refusal to divest stemmed in part from their belief that this investment posed ‘no injury,’ it’s pretty sickening to watch them continue to stand by their decision.” Favreau is employed by the Department of Geography at McGill, and spoke to his position as a non-academic staff member within the divestment movement, suggesting that labour union organizing will be a key tool to achieve climate justice going forward, in the absence of the University’s moral leadership.

By the time of this February 13 rally, RCMP tactical units had raided camps and checkpoints on the territory of the Wet’suwet’en Nation. The RCMP is accused of violating both hereditary Wet’suwet’en law as well as the recently implemented United Nations Declaration of Rights for Indigenous Peoples. According to Alex Neve, Secretary General of Amnesty International Canada, these raids provoke a variety of “serious human rights concerns” and “directly contravene a December 2019 ruling from the UN’s highest anti-racism body, the UN Committee on the Elimination of Racial Discrimination.” Neve cautions that these circumstances necessitate media scrutiny as an “essential safeguard” to protecting the lives of jailed protestors and those on the front line of this ongoing conflict, including matriarchs forcibly removed from sacred grounds. Despite this, journalists have faced restricted access to the Unist’ot’en camp grounds, resulting in a virtual media blackout. Independent contributions on the ground, and updates from the Unist’ot’en Facebook Page have been providing sustained coverage. The RCMP’s recent ‘crackdown’ on journalists threatens the free press, according to Neve.

Speaking to the Daily, SSMU Indigenous Affairs Commissioner Tomas Jirousek commented on the rally, expressing the Indigenous Student Alliance’s appreciation of “the allyship [they’ve] seen from across different social justice movements.” Jirousek spoke further to the conflict on Wet’suwet’en territory, highlighting that it is “not limited to Indigenous sovereignty, but is interconnected with issues such as climate change, food sovereignty, and pedagogical structures,” which remain “land-based and land-derived” in the context of Indigenous pedagogy. The Indigenous Student Alliance was present at the rally, among Divest McGill and other non-Indigenous allies.

Jirousek added that climate justice does not exist in isolation from issues of Indigenous rights and highlighted the importance of activism on campus that incorporates this intersection, like the work of Divest McGill. “It becomes crucial for us, as Indigenous peoples, to protect the land.”