Holding Space in Solidarity with Wet’suwet’en 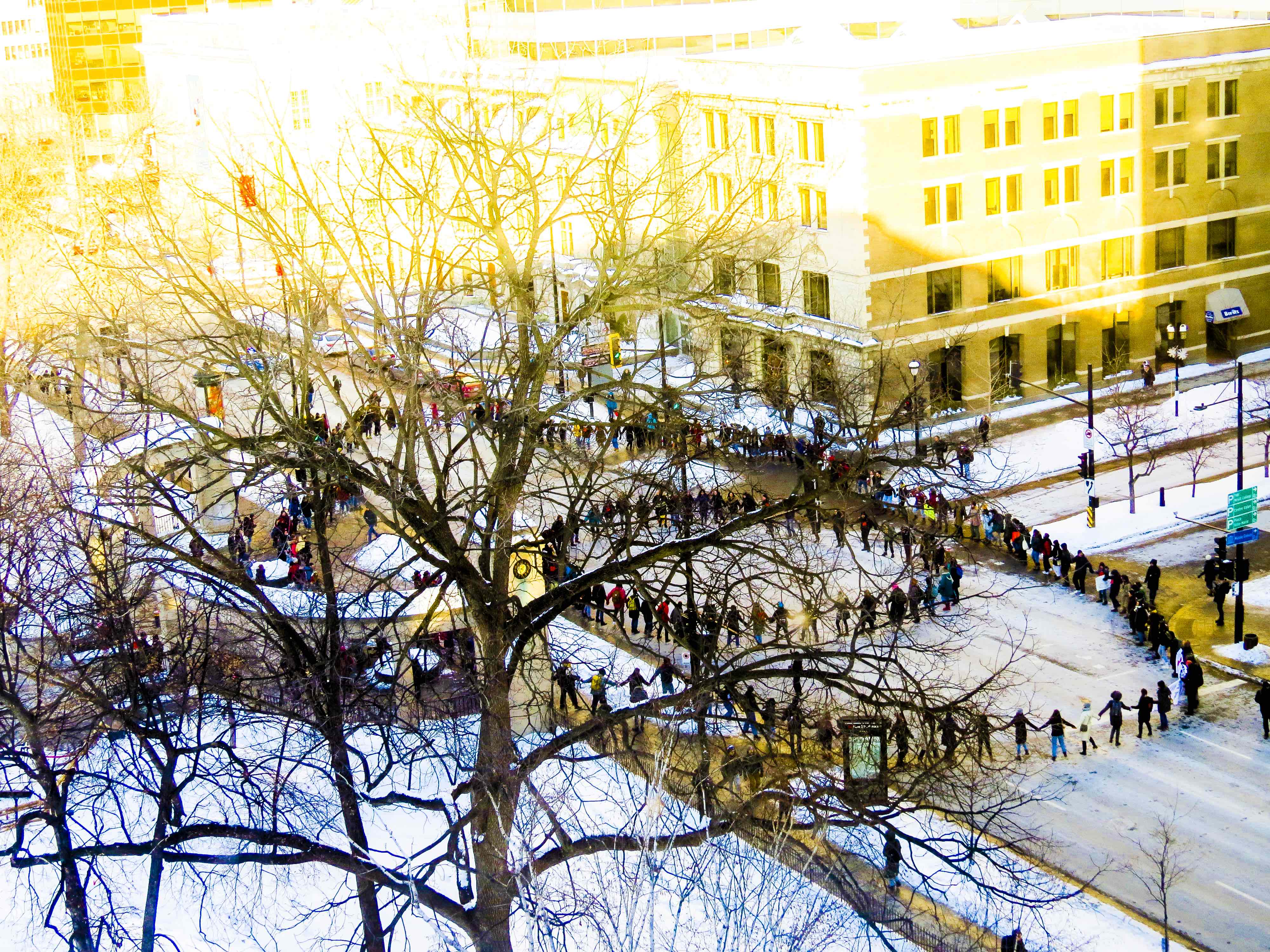 In collaboration with SSMU Indigenous Affairs, Indigenous Youth for Wet’suwet’en held an event on Monday, February 17 in solidarity with the Wet’suwet’en Nation’s opposition to the proposed Coastal GasLink (CGL) pipeline. The event began at McGill’s Y-intersection at 3:00 p.m. before moving towards Sherbrooke Street, where close to 100 allied demonstrators formed a circle around Indigenous land defenders. The solidarity action, in tandem with blockades across Canada, paused traffic on Sherbrooke Street for the duration of the event.

Succeeding in blocking Sherbrooke on both the East and West sides approximately 30 minutes after people began to gather, demonstrators stood linked in front of traffic, holding banners that read “Solidarity with Wet’suwet’en.” Soon after the street was blocked off, around 3:45 p.m., the SPVM arrived and posted several cars, vans, and tactical units at the intersecting streets. Police presence did not directly interfere with the demonstration, but several SPVM officers were seen speaking to student organizers.

“Stand up, speak out, pressure your MPs to stop this pipeline, and most importantly, trust us to lead. Center our voices. Listen to our elders. Listen to our people on the frontlines. Indigenous peoples know where we come from, we know that relationship. We know what it means, and we are not going anywhere.”

The event began with a statement of thanks to the lands, waters, and aspects of the natural world led by land defenders and Indigenous Youth. Several Indigenous land defenders guided the group in call-and-response chants, including “How do you spell racist? RCMP” and “Land Back,” calling for Indigenous sovereignty. Addressing the gathered land defenders, students, and other allied demonstrators, SSMU Indigenous Affairs Commissioner Tomas Jirousek emphasized that this action should not be considered a blockade, instead describing it as a “cultural, community-centred expression of sovereignty and holding space.” He also expressed that Indigenous actions across the country can’t be reduced to “simple protest” or “demonized as criminal activity,” but are grounded in land-based practices, oral histories, laws, and kinship networks.

A group of drummers led the attendees in two round dances, and all Indigenous attendees were invited to share songs, chants, stories, and hold space. One community member, who self-identified as Dené and Inuvialuit, shared their throat-singing, explaining that “60 years ago, you would have been able to turn around and tell the cop to arrest me, because what I’m about to do was illegal.” They expressed that their performance was an act of protest – and a show of deep pride.

“As Indigenous Nations, we can’t separate our ideas of sovereignty or nationhood from a deep and intimate understanding of land and water protection. We have always been fighting to protect this land, and we always will.”

Towards the end of the event, the attendees were invited to join hands and participate in songs. The allied demonstrators who had previously been giving space to the Indigenous land defenders at the centre were also invited to close the gap in a show of community.

After approximately two hours, the demonstration formally ended and the group began to disperse just after 5:00 p.m., clearing the street and allowing traffic to resume.

“The land defenders at Unist’ot’en, and the Indigenous folks involved in occupation and blockades across Turtle Island, are not villains with personal vendettas. They aren’t armed. They aren’t dangerous. They’re peacefully taking the necessary steps to bring the Canadian government to the table. They’re shutting down Canada. They’re inconveniencing Canadians. They’re staying until Wet’suwet’en law is respected, until Indigenous sovereignty is recognized.”

Solidarity events continued through the week, including a demonstration hosted by the Association facultaire étudiante des sciences humaines de l’UQÀM (AFESH-UQÀM). Ongoing blockades near Kahnawake have been blocking the CN and VIA rail lines, and a blockade on the South Shore of Montreal began on Wednesday, February 19. On Thursday, February 20, injunctions were issued and carried out by the Sûreté Québec. The next evening, demonstrators and land defenders abandoned the blockade due to pressure from police, eventually evacuating the encampment in Saint-Lambert around 10:00 p.m.

“Action like this needs to centre ourselves in culture and ceremony, as taught through the very land which now finds itself threatened. For our non-Indigenous allies: recognize the way in which your history has contributed to the inability of Indigenous land protectors in many circumstances to continue in protecting and safeguarding this territory. Don’t centre yourselves in this story, but use your own platform to amplify and support Indigenous voices. Also, know the other ways that you can and should be supporting Wet’suwet’en territory. You can find very explicit ways that the Wet’suwet’en are asking for support.” 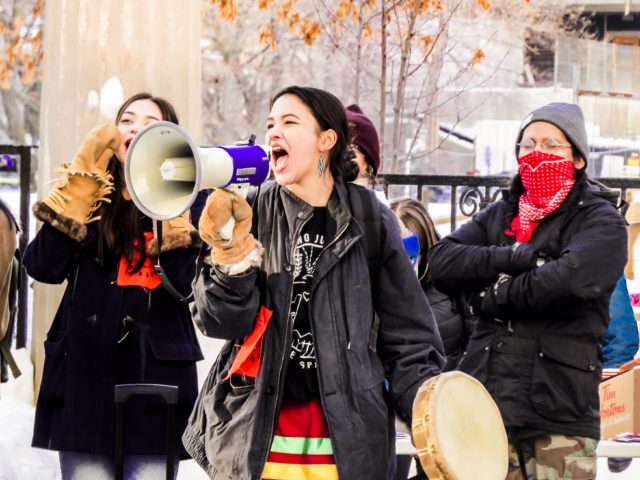 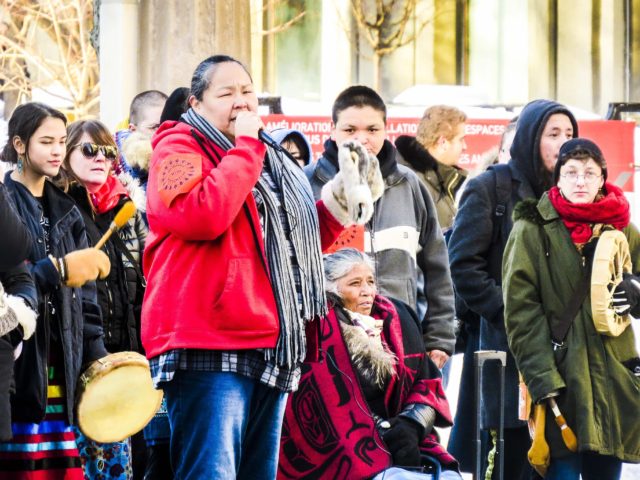 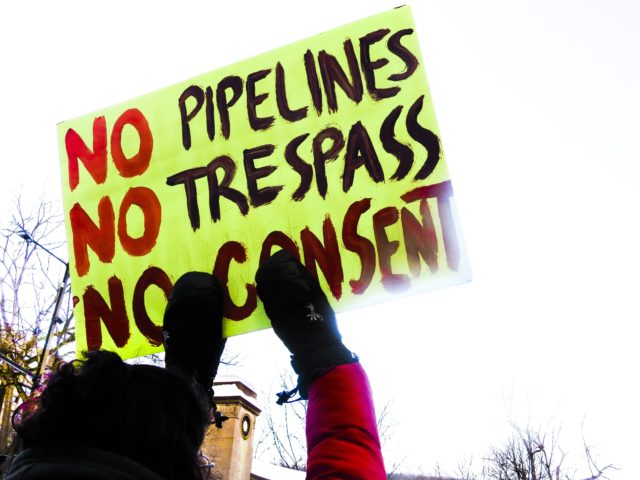 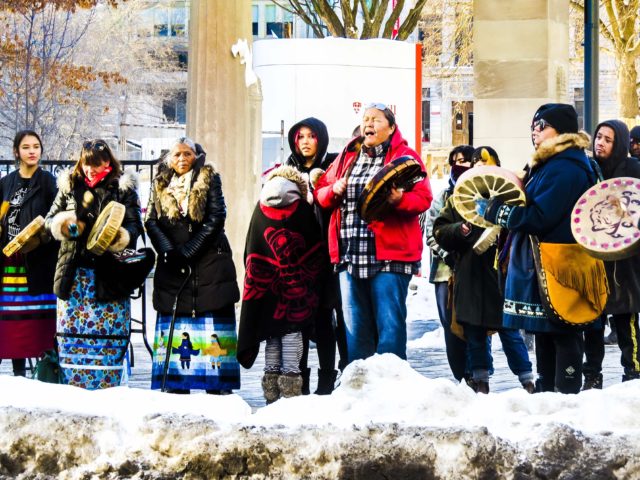 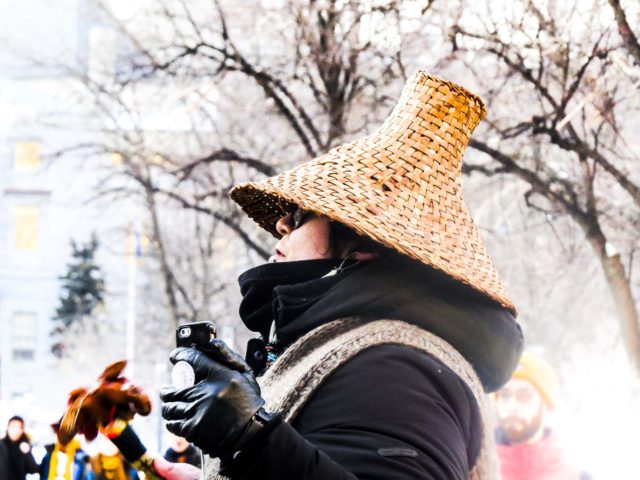