SSMU’s Accountability Committee plans to present a report to the Board of Directors (BoD) recommending that VP University Affairs Madeline Wilson be suspended without pay for five days, according to documents received by the Daily through an anonymous source. The recommendation – written by the Accountability Committee of the SSMU BoD – cites Wilson’s “refusal to comply” with mandates issued by the Legislative Council and ratified by the BoD, as well as her “insubordination.”

The recommendation is as follows: “On the basis of the December 4th Complaint, the Accountability Committee recommends to the [SSMU BoD] that the Vice-President (University Affairs), Madeline Wilson, be suspended in her capacity as an Officer for a period of five (5) working days without pay, to take effect at 9:00 a.m. on 27 January 2020 and end at 5:00 p.m. on 31 January 2020.”

Instigated by Wilson’s “use of profanity” in a Facebook post addressing McGill’s decision against divestment – made to the University Affairs page on December 4, 2019 – the recommendation was written following a complaint made by a Councillor of SSMU Legislative Council on the same day to the Accountability Committee. The post in question included “profanity” in the text of the post following a content warning, calling on the McGill administration to “step the fuck up.”

As outlined by the recommendation, Wilson’s post on December 4, 2019 is a continuation of her challenges against the BoD ruling, which resulted from complaints following a Facebook post to the University Affairs page on October 31, 2019. Condemning anti-Indigenous racism in the McGill community, Wilson posted in solidarity with Indigenous Affairs Commissioner Tomas Jirousek, stating that racists “can go fuck themselves.”

The original mandate – approved in Legislative Council on November 28, 2019 – singles Wilson out by her position, and states that SSMU Executives are “[prohibited from] the use of profanity in Official SSMU Communications”. The motion, while obtaining a majority of votes, also faced substantial opposition. Former Social Work Councilor Jo Roy stated in the previous council on November 14, 2019 that the motion “amounted to tone policing.” Wilson defended her language, stating that she “[chooses] to use profanity” in communications “specifically with regards to issues or topics [she feels] quite strongly about and that [she feels] deserve strong language, such as explicit racism directed at individuals.” The final vote in Legislative Council had 19 councilors vote in favour, four against, and five abstentions.

According to the recommendation, Wilson has stated both in the Senate Caucus and in the December 2 BoD meeting that she would not comply with the BoD’s ruling on the mandate, which was also cited as the rationale for her suspension.

The recommendation will be received by the BoD and voted on in their meeting on Thursday, January 23, 2020. 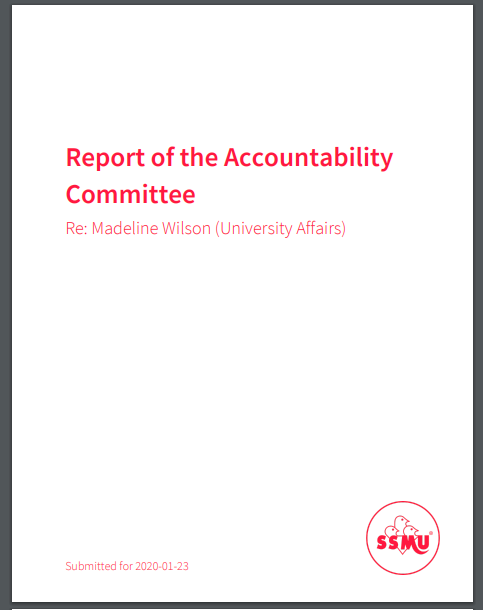 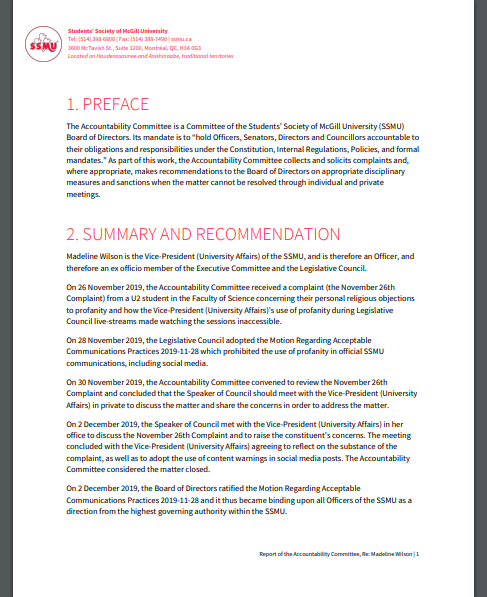 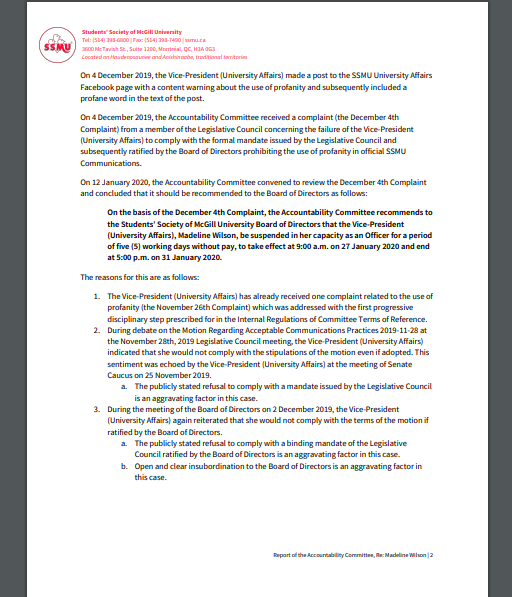 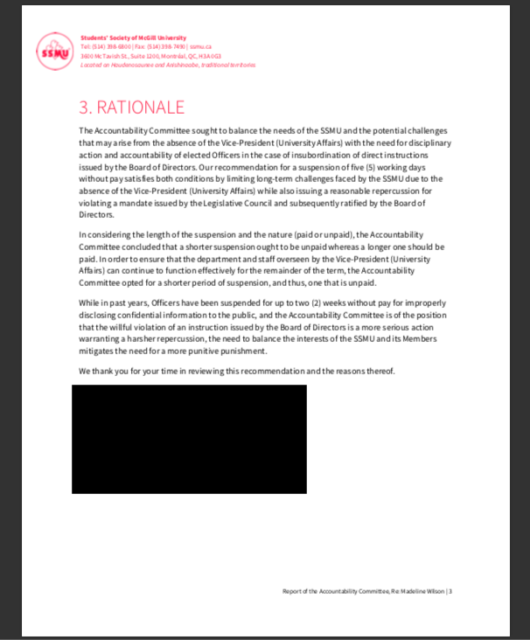 This is a developing story. The Daily will provide updates as information is released.