“No Justice, No Peace, US out of the Middle East” 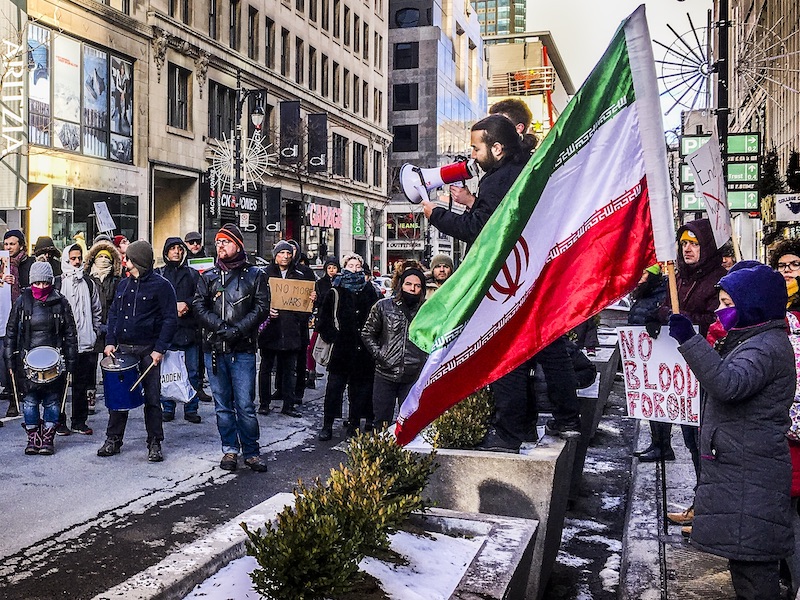 On Sunday, January 5, just days after the US ordered the assassination of Iranian Major General Qassem Soleimani at Baghdad International Airport, anti-war protestors took to the streets of downtown Montreal to decry US aggression.

Two Montreal demonstrations against a U.S.-Iran war were originally organized by separate parties – Montreal activist Shelby Johnson and the International League of Peoples’ Struggle (ILPS) in Canada – before deciding to merge into one unified demonstration, beginning at Phillips Square and ending at the US consulate on Saint Catherine Street West. As the protesters marched down Aylmer Street from Phillips Square, they chanted, “US imperialists, number one terrorists” and “No more war,” among other slogans.

Demonstrators held posters with anti-war messaging, such as “Stop economic terrorism now,” “US out of Middle East,” “No blood for oil,” and “Stop the war machine.” A few held up photos honouring the deceased general, a move which angered some Iranians at the rally who hold unfavourable views of the government. While marching down Maisonneuve Boulevard West, one protestor shouted “Islamic regime is terrorists” and waved the flag of the former monarchy in Iran, which was overthrown in the 1979 revolution.

After reaching the US consulate, a number of Iranians, Americans, and Canadians took turns decrying Western imperialism in the region. “No one deserves to live in a war zone,” one protestor declared.

In their speeches, speakers referred to the 1953 CIA coup in Iran, U.S. economic sanctions on Iran, the American occupation of Iraq, and its benefits to Western oil companies, many of whom gained profitable access to Iraq’s oil industry and came to dominate it because of the war.

While sanctions may not initially seem to put lives at risk, this is not the case in Iran. Due to sanctions and governmental mismanagement, Iranians lack critical access to humanitarian goods such as life-saving medicine, especially chemotherapy treatment drugs. The weight of sanctions introduced by US President Donald Trump in the past year have also resulted in inflation rates of 35.7 per cent according to the International Monetary Fund, meaning that the average price of consumer goods has risen by that percentage in the past year, therefore making it difficult for many Iranians to afford essential items. Deutsche Welle noted that the Statistical Center for Iran calculated an even higher inflation rate of 47.2 per cent, with food and fuel inflation at more than 60 per cent. This pressure has undoubtedly compounded into civilian unrest, as the Iranian government’s decision to increase gas prices in the wake of mounting economic stress incited widespread protests in the last few months of 2019.

Another protester in front of the consulate noted similarities between former US President Bill Clinton and sitting President Donald Trump. “The last time a president was impeached, he resorted to violence,” they stated to the crowd, “just to manipulate [US] domestic politics.” Indeed, in 1998, Clinton launched a strike against Iraq just days before his impeachment inquiry, and was later acquitted in the US Senate. Additionally, Trump’s tweets in 2011 and 2012 that stated Obama would strike Iran in order to be re-elected have resurfaced. One Twitter user called these statements “pure projection,” describing Trump’s actions as having “no plan, no strategy, no rhyme, no reason, just impulse from the man who thinks a president could try to stay in office by starting a war.”

One speaker turned to comment on the death of the Iranian military figure, stating “We are feeling the loss of General Soleimani […] he lived in the hearts and minds of the people in the Middle East.” This statement, again, was met with shouts from one protestor against the current Iranian government and Soleimani.

Indeed, there are varied opinions among Iranians and Iraqis of Soleimani. Many Iranians see him as having been one of the primary reasons for ISIS’ losses in the region, which garnered the late general immense respect. Thousands of Iranians attended his funeral in Tehran on January 6. However, some are not as saddened by his death, especially those living abroad. Just a day after the strike, the Los Angeles Times reported on Iranian-Americans’ reactions, citing quite a few of whom who felt relief at the news. One was quoted as saying “In a vacuum, objectively, his death is a welcome development,” but that for many Iranian-Americans, they “are fearful of the repercussions. This is a really dire situation if it escalates.”

Iran’s increasing involvement in Iraq’s political affairs has garnered Soleimani further criticism as well. France24 reported that Soleimani had visited Iraqi authorities in November 2019, advising them on how to repress the protestors in the midst of increasing demonstrations against Iranian influence. In Iraq, this repression by the state security forces led to the killings of 500 peaceful protestors and thousands of injuries. In December, Reuters reported that approximately 1,500 Iranians had been killed in demonstrations against the government across a two-week period.

After looking into leaked Iranian intelligence reports, The Intercept found that Shia militias’ actions in Iraq, which had been backed by Soleimani, had created an unfavourable perception of Iran by Iraqi Sunnis. In Jurf al-Sakhar, Shia militias loyal to the Soleimani led Quds force defeated ISIS in 2014, but the battle was followed by the killings of innocent civilians and the displacement of tens of thousands.

Effects on Iranians and Iranian-Americans

While many are averse to the current regime, for Iranian Americans, the idea of war is frightening. In the past week, President Trump has threatened the attack of 52 Iranian cultural sites, which, per Human Rights Watch, is a war crime. Many fear for their families’ safety in Iran, as well as increasing surveillance of Iranians in the US. The weekend after the strike, approximately 200 Iranian-Americans were detained and questioned at the Canadian border entering Washington state, and some were held for 12 hours.

Both the Los Angeles Police Department and the New York City Mayor, Bill de Blasio, issued tweets following the attack, calling on citizens to “say something if you see something” and stating that they “will have to be vigilant against this threat for a long time to come.” Many Twitter users have called these tweets “propaganda,” as one user argued that “these ridiculous warnings of non-existent ‘threats’ are just fear tactics to help sell Trump’s illegal imperial war of aggression against Iran.”

“I immediately just thought [after hearing the news of the strike], this is so terrible,” stated Persis Karim, director of the Center for Iranian Diaspora Studies at San Francisco State University, as quoted in the Los Angeles Times. “You can be critical and have feelings of disdain for a regime that murders its own people, and still believe that war is not going to be any kind of solution.”

As the protest in front of the US consulate cumulated around 1 p.m., the crowd repeatedly chanted “No justice, no peace, US out of the Middle East.”