Occurring annually since 2010, the Commemorative Vigil for Justice for Victims of Police Killings is organized by a coalition of relatives and loved ones affected by police violence. Like every year, this year’s vigil was held on October 22 – a date chosen to commemorate the National Day of Struggle for Victims of Police Killings in the United States since 1996. Honouring the lives of victims of police killings in Montreal, the families and friends of Gladys Tolley (killed by the SQ in Kitigan-Zibi in 2001), Ben Matson (killed by the Vancouver police in 2002), Mohamed Anas Bennis (killed by the Montreal police in 2005), Claudio Castagnetta (killed by the Quebec city police in 2007), Quillem Registre (killed by Montreal police in 2007) and Fredy Villanueva (killed by Montreal police in 2008) gathered outside the Montreal Police Pension Fund building. Attendees called for justice for victims and their loved ones, shared testimonies of brutality and violence at the hands of police, and “demand[ed] access to information for families, independent investigations, and an end to impunity.”

“Ten years later, we’re still calling for the same thing: truth, justice, and accountability. It’s not getting better, it’s getting worse. Every year, there are more victims, there are more families. That’s why we’re here, we want justice in our investigations. It’s not going to end until we get justice from the police, from the federal and provincial governments.”
— Bridget Tolley, daughter of Gladys Tolley (member of the Anishinabeg First Nation and co-founder of Families of Sisters in Spirit) 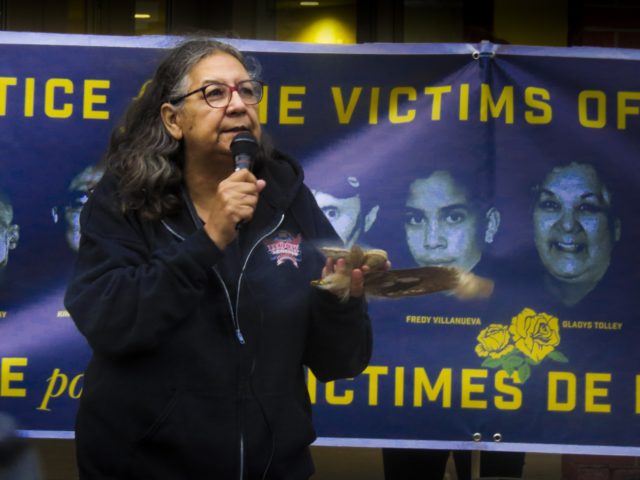 “I want the cops to be accountable for their actions, what they did to my son. They should be punished, they should go to prison for the things they have done. For all the family members who have lost their loved ones to the police, we should come together as one. We need to be strong, and not lose hope. Hope is the substance of all things. We are going to fight this battle, but we do not have enough support, we need more support.”
— Trish Gibbs, mother of Nicholas Gibbs 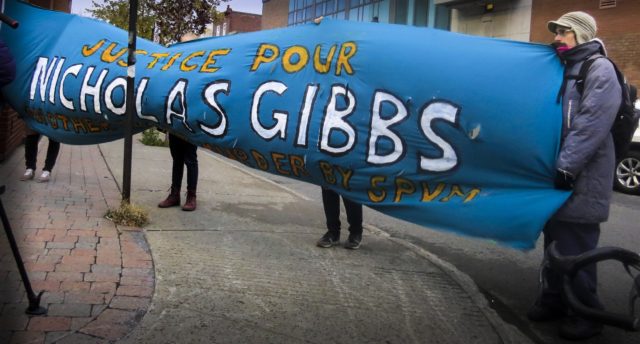 “I was really hoping the police would be outside today, because I have a message for them. I think the police think that their unions, their employers and their legislators are protecting them. The SPVM chief is surprised that there’s racism in his province – this is because they don’t listen to us. Our children who have been killed, they’re victimized. They’re no longer people who were killed by the police, they’re a depressed teenager, they’re a drug addict, they’re a drunk. It’s always their fault that they got themselves killed. The Bureau of Independent Investigation is not giving us any transparency, I don’t think they’re giving us any accountability or answers – so it’s up to us.”
— Tracy Wing, mother of Riley Fairholm 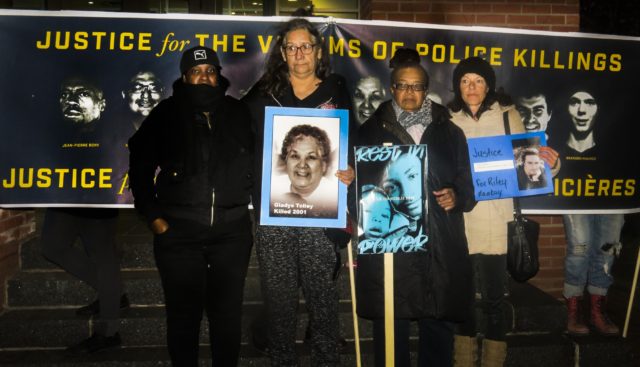 “The SPVM just released a report on the presence of systemic racism in Montreal’s police force. The police spokesperson said that ‘advocates have been telling us racism exists, but advocates have an agenda.’ It’s true we do have an agenda, it’s called compassion and fairness. Until we have paperwork that proves there is racism, the police pretend that they don’t have to address it. In the government’s mind, they’re neutral: they’re the arbiter of right and wrong. We have a judicial system, we have a judge and jury. But our police force has become the judge, jury, and executioner.”
— Dexter X, Montreal Activist

All quotes have been edited for length and clarity.