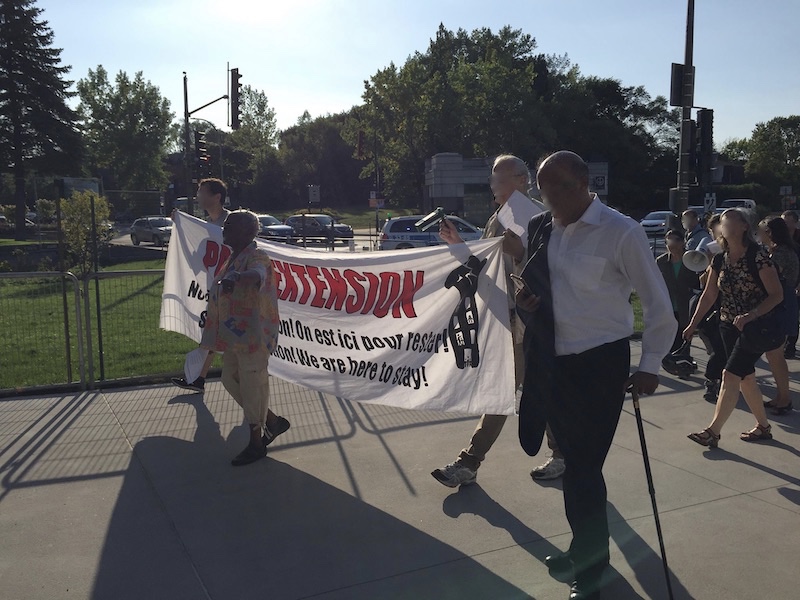 Over 50 people assembled outside of Acadie Metro at 4:00 p.m. on September 21 to protest Université de Montréal’s (UdeM) new MIL Campus. Opened on September 20, the campus is located on former railway yards in Outremont. In 2016, UdeM received $84 million from the federal government, in addition to $116 million from the provincial government. Overall, the project cost $350 million. Initially, UdeM had promised to build 1,300 units of student housing in the new campus, but they have since decided to sell the apartments as condos. Given that the former Outremont railway yard lies between Parc-Ex and Outremont, community activists have argued that the MIL Campus in Parc-Ex will significantly contribute to the forces that are already pushing people out of the area.

According to Centraide’s Territorial Analysis for 2015-2016, Parc-Ex is the poorest neighbourhood in Montreal, with a poverty rate of 44 per cent. 61 per cent of residents are immigrants, and 63 per cent are racialized. Rents in Parc-Ex are some of the cheapest in Montreal, but even so, 44 per cent of tenants spend at least 30 per cent of their income on rent. In the last few years, the neighbourhood has been undergoing what some describe as hypergentrification. According to a report from LaPresse, some landlords are forcing evictions and tripling rent, while others keep their rents low but provide no maintenance, thereby rendering the remaining cheap apartments in Parc-Ex unsanitary. As a result, many low-income tenants have been, or are being, displaced. Comité d’action Parc-Extension (CAPE) Community Organizer Amy Darwish told the Daily, “people are being scattered to the far ends of the city, far from their support networks.” She emphasized that Parc-Ex has a thriving community system, which risks being lost as more residents are being displaced. Though gentrification has been occurring in the neighbourhood for some years, community activists point to the MIL Campus and to the AI firms opening in a former industrial area west of Little Italy (now marketed as the “Mile-Ex”) as major contributors to this new round of hypergentrification.

UdeM’s inauguration of the campus took place on September 20, which was attended by many elected officials including Quebec premier François Legault and Montreal mayor Valérie Plante. CAPE members and Parc-Ex residents attended the inauguration as well. According to the Daily’s sources, they dropped a banner that read “le campus MIL gentrifie Parc-Ex” [“the MIL campus gentrifies Parc-Ex”] during the rector of UdeM’s speech, while chanting slogans and dropping flyers onto the crowd below. The banner drop, carried out around 10:30 a.m by 10 people, was organized by members of CAPE and the Parc-Extension Tenants Association. They were quickly escorted out by campus security, but reconvened outside the building and continued chanting.

The following day during UdeM’s “citizen’s party” to “celebrate the birth of the Quartier MIL,” protestors gathered at Acadie metro. Residents and organizers (namely members of the CAPE) spoke from 4 p.m. until 4:45 p.m. At 4:45 p.m., the protestors commenced a “tour” of the new campus. They walked across the new pedestrian bridge and through the MIL campus to the Outremont side, where the “citizen’s party” was taking place. The protestors chanted slogans, such as “Park Ex is not for sale” and “ni campus, ni condos / on veut des logements sociaux” [“no campuses, no condos / we want social housing”], interrupting kiosk transactions and DJ sets. After walking through the kiosks and back, the protestors returned to Acadie metro. Final speeches were made thanking protestors for coming and encouraging residents to continue organizing against gentrification in Park Ex. Saturday’s action was orchestrated by CAPE, and received support from the Front d’action populaire en réaménagement urbain (FRAPRU).

Darwish said that these two actions were important because they challenge the narrative that the MIL Campus will revitalize Parc-Ex, as put forward by the university and by mainstream media. Darwish told the Daily that “for many, revitalization means displacement. Gentrification doesn’t improve quality of life. It creates more poverty as rents rise, as evictions increase, and as local businesses close.” Furthermore, she said that “Parc-Ex doesn’t need to be revitalized because Parc-Ex isn’t dead. We don’t need luxury restaurants or expensive condos and businesses. We need rent control and more social housing.”