In Solidarity: A Colonial Context 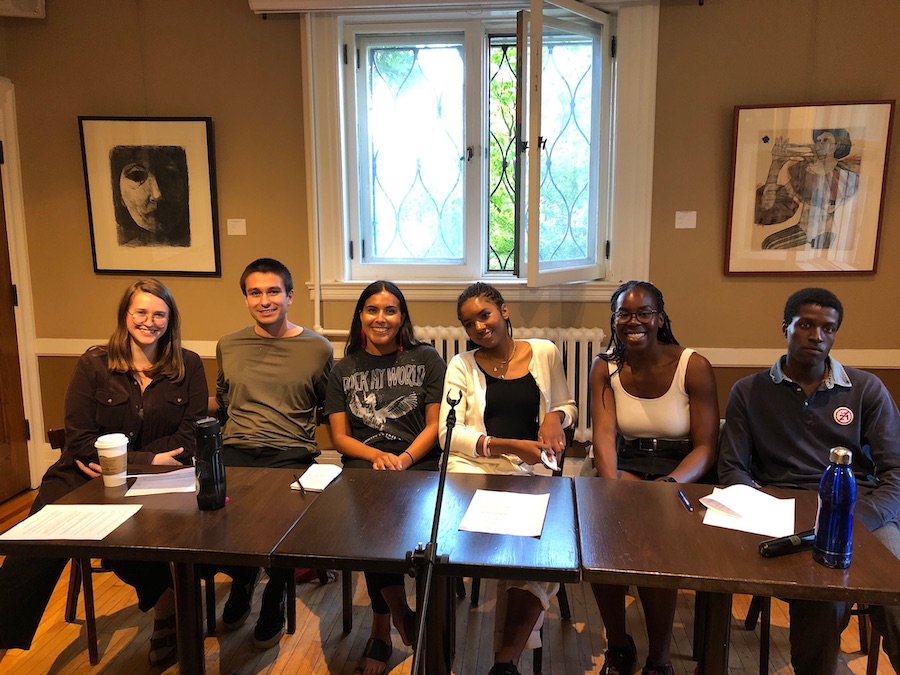 On September 19, three students from McGill’s Indigenous Student Alliance (ISA) and three students from the Black Student Network (BSN) came together for a public roundtable on the topic of solidarity and allyship – specifically in the colonial context of McGill University.

Ogunremi opened the panel, remarking that it was “a very appropriate day” to be talking about solidarity. This past week, a series of photos and videos of Prime Minister Justin Trudeau in brownface and blackface in the 1990s and early 2000s were found and published online.

“It was a very hurtful and astounding image to witness for anyone who has experienced any kind of racial discrimination,” Ogunremi told the audience. This pervasive bigotry and white supremacy, he said, has been institutionalized into our political system.

Kemeni, whose advocacy on campus centres around racial justice and the prevention of sexual violence, brought up the topic of intersectionality. She underscored the fundamental role of violence in allowing McGill students to operate in Tiohtià:ke: what settlers call Montreal. “Rape was used as a tool to take this land that we stand on,” she stated.

At an overwhelmingly white university, finding these safe, shared spaces can be extremely important for Black and Indigenous students.

Favel, who is a member of the Cree Nation, grew up in Calgary, Alberta. “There’s not a lot of appreciation for Indigenous people there,” he explained; “it’s something you try to hide.” Around four years ago, Favel began working as a forklift driver, and at the panel, he recalled his first day at work. “I go into the lunchroom. I walk in, and all these old, white forklift drivers are talking about all these drunk natives in Calgary,” he explained.

“They looked at me and they had a very surprised look on their face and said, ‘Are you Indigenous?’ And I said, ‘no, I’m not.’”

But being a part of ISA and being around Indigenous students, Favel says, has changed that. “That doesn’t even remotely cross my mind now – I’m proud to be Indigenous.”

Bruneau, who is from the Northwest Territories, echoed his statements. “They make navigating a world Indigenous people were never meant to be in a lot easier.”

“Say someone says something really shitty in class,” Bruneau explained; “I can go to my Indigenous friends, and they validate it and make me feel that my feelings are normal.”

It’s about the solidarity of having people around you who share a common history, she said. “You don’t have to explain where you’re coming from […] that labour – you don’t have to do it with Indigenous students on campus.”

Trotz agreed, adding that “coming to McGill and having a community of people who are like-minded and who know those experiences, validates you as a person.”

Kemeni, whose family immigrated to Canada, explained the internalized pressure she felt growing up to “adopt ‘white’ stereotypes and attributes” in order to be successful.

McGill as a Colonial Institution

The moderator posed the question of McGill as an institution, asking if it has decolonial aspects. One topic that was brought up was that of land acknowledgements.

Regarding the Indigenous Studies program at McGill, Bruneau added that it feels strange to her.

“[The professors] talk about us in a such a way that trivializes our identity and puts us at a static point in history, in a book or a painting, like we are not in this room,” she said. “They operate under the assumption that we are not in higher education.”

Trotz also emphasized the lack of Indigenous and Black professors at the University, as well as the fact that even though Montreal has a large Black population, “you don’t see that on campus.”

Role of Non-Black and Non-Indigenous Allies

For ISA, Bruneau says, allies are critical because they can take on the emotional labour that is too often delegated to Indigenous students. When ISA was tabling and campaigning last year to change the R*dmen name, she told the audience, it was important that non-Indigenous allies took on the burden of talking to aggressive onlookers.

“Often all of their comments were directed at the visibly native person,” Bruneau explained, “so having a settler ally on the table really helped […] take some of the load off of us, so that we don’t have to do it all alone.”

As for Kemeni, she says that one of the most crucial things an ally should do is listen. Trotz echoed this statement, adding that it’s important to know “that your ideas matter and how you feel matters.”

“It’s literally as simple as just giving someone a hug,” Kemeni said, “and saying ‘I see you, you’re doing it, and we’re gonna get through this together.’”

She added, “it’s such high stakes when it has to deal with you.” At the same time, Kemeni explained, it’s important to ask yourself “why am I doing this?” and to understand the intention of why you’re doing something, because too often, there is still an element of white saviourism.

Trotz added to the dialogue regarding the role of non-Black allies in dismantling anti-Black racism. “It’s important to have a space where our bodies our prioritized,” she stated, “in classrooms and on-campus, Black and Brown bodies are not prioritized.”

But too often, Trotz says, people see BSN as “exclusive,” and they received comments saying that Black Frosh was “discriminatory.”

Kemeni stated that in addition to the anti-Black microaggressions from non-Black people regarding the BSN, “folks are scared because they don’t know how to navigate a space.”

“When you come from a racialized background, you’re always aware of your body and the space you’re taking up and how you navigate the world,” Kemeni explained. But for people who don’t have that experience, they have to deal with this new uncomfortability, where spaces aren’t automatically accommodating you.

In the colonial context, Tratz stated, both Black and Indigenous peoples have “two incredibly oppressive histories.”

“There’s so much we can learn from one another.”