“Occupation is a Crime; Cancel POLI 339” 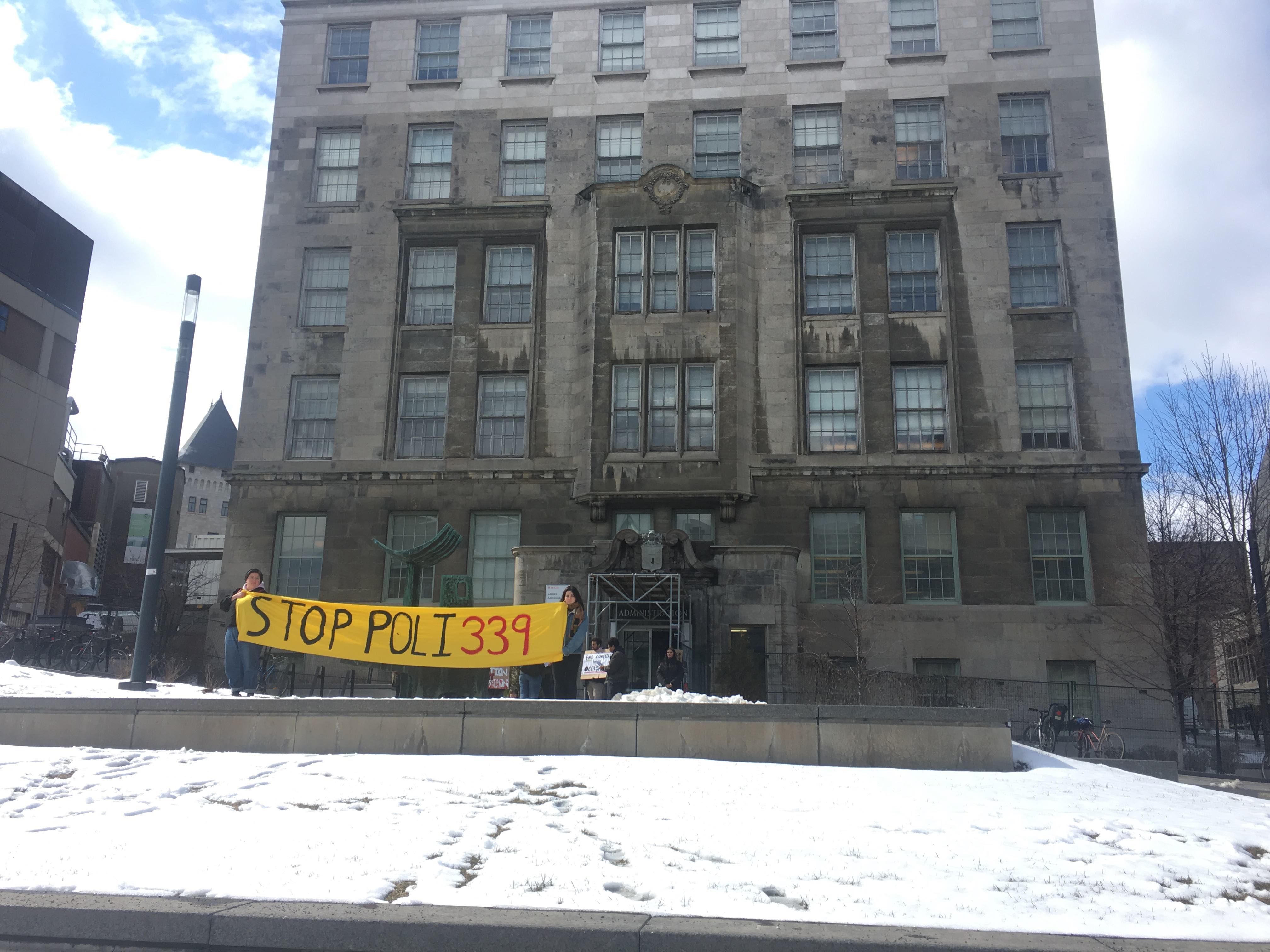 On Wednesday, April 10 at around 1:30 PM, students staged a sit-in at the James Administration Building, protesting McGill’s decision to offer POLI 339. The political science course is slated to take place this summer at the Hebrew University of Jerusalem, whose Mount Scopus campus is situated on illegally-obtained Palestinian land in East Jerusalem and is in violation of international law, as per Resolution 446 of the UN Security Council. The demonstration came after a related petition was published and circulated online. At the time of this article’s publication, the petition had 359 student signatures and 14 signatures from professors. Both the petition and the protest on Wednesday outlined the ways in which McGill University has violated student democracy, is putting students at risk, and is actively “ignoring the ethical and violent ramifications of its decisions to operate, fund and promote numerous exchanges with Israeli institutions.”

Shortly after the demonstration began, Interim Deputy Provost (Student Life and Learning) Fabrice Labeau came to address the protesters. He told students that he had not read the email that had been sent to him regarding the demands of the petition, and mentioned official procedure a number of times to state why the course could not be cancelled. In an earlier account provided by the petition, it is stated that “Fabrice Labeau claimed there was no precedent for reversing a course fee approval.” (It is relevant to note that courses have been cancelled at McGill for various reasons before, and that there are channels to do so within official procedure.) The approval that Interim Deputy Provost Labeau referred to was deemed invalid by the Secretary-General of the Arts Undergraduate Society (AUS). Protesters then stated to Interim Deputy Provost Labeau, as well as Provost and Vice-Principal (Academic) Christopher Manfredi, that if they had not read their email, it was evident the administration ultimately did not care about student concerns or democracy.

The protesters then began chants, such as “Israel is an apartheid state; 339 discriminates,” “occupation is a crime; cancel POLI 339,” “are we mad, yes you bet; Suzi can you hear us yet?” and “occupation isn’t funny; students over donor money.” The sit-in blocked the front door to the James Administration Building, causing administrators to have to use an alternate entrance. At this entrance, protesters simulated Israeli checkpoints to show administrators the discrimination and harassment Palestinian, Arab, and/or Muslim students would face at the Israeli border if they enrolled in POLI 339. This detainment and harassment at the Israeli border is well-documented, with numerous cases of activists being detained, as well as marginalized folks without a history of activism. In some instances, these concerns continue even after initially being granted entrance into the country.

As of now, the Israel and Palestine director of Human Rights Watch (HRW), Omar Shakir, is in the process of appealing the decision of the Israeli government to revoke his work permit and expel him from Israel. Shakir had previously been denied a work permit in 2016, but was eventually granted one two months later following international criticism. However, the government has used legislation passed in 2017 (the same legislation often used to deny activists entry into Israel) to provide a reason for his expulsion, accusing Shakir of promoting boycotts against the state. Throughout his tenure, Shakir has only promoted the official stance of HRW – “that businesses should halt their activities in illegal West Bank settlements” because they violate Palestinian human rights. Prior to the shutting down of the US consulate in Jerusalem and subsequently its website, the official consulate website stated that people who appear of “Arab, Middle Eastern, or Muslim origin […] may face additional, often time-consuming, and probing questioning by immigration and border authorities, or may even be denied entry into Israel or the West Bank.”

In addition to the sit-in, protesters handed out flyers to passersby, detailing the discriminatory treatment marginalized students would face at the border, the illegal occupation of Palestinian land by the Mount Scopus campus, and the donors to this course: the Gerald Schwartz & Heather Reisman Foundation, “[who] have funded scholarships for non-Israelis who enlist in the [Israeli] military.” The petition then argues that “[POLI 339] is therefore intellectually dishonest, because the source of its funding is strongly tied to the violent Israeli military occupation of Palestinian territories”. This has been described in detail by Amnesty International.

While a few people attempted to break through the protesters’ sit-in and disturb them, the students maintained their ground, and the demonstration continued. The protest went on until 5:30 PM, at which point the group disbanded.

One student emphasized her concerns with the course, stating, “Israel has a well-documented history of discriminating against people of colour. [Incoming travellers have repeatedly] been detained for long hours [and] interrogated.” She went on to say, “this is McGill putting their students’ […] safety at risk. We had the student democratic results for the AUS council show that we didn’t want to fund this course, but McGill [is] still going to promote and fund the course.”

Another student echoed these concerns, saying, “[we] also need to talk about the professors who will be teaching this course: Professor Richard Schultz and Professor Harold Waller. They’re in their last years of teaching at McGill, […] and if you look through what happened in the AUS apology email and all of the information they gave us, you see an email Harold Waller sent to Maria Thomas, who’s the president of AUS, and it’s very pressuring. She even says explicitly [that she] felt pressured by that email.” The student then asked, “how did they know about these FIO [Frais Institutionnels Obligatoires (mandatory fees)] by-laws? […] On top of the fact that this is complicity in ethnic cleansing and occupation, […] you have these professors who are trying to get this to happen in ways that are not democratic and not facing any repercussions for that.”

There were also specific concerns relating to Professor Waller, with one student stating, “in his course on Israel, he has never once mentioned Palestine, which you can see on the syllabus. […] How can you teach a course on domestic Israeli politics if you don’t mention Palestine? I think that’s really key – the issue is that these professors don’t have good intentions to begin with; they’re trying to game the system, and that’s a problem.” The course in question taught by Professor Waller, POLI 437 (Politics in Israel) – as of the Fall 2017 syllabus – has a lecture on minority politics, referencing the Arab population in Israel, but not a specific lecture on Palestine.

Another activist spoke about McGill’s past and ongoing complicity in the occupation of Palestine and its continued silencing of student activists, stating, “student activists have been met with silence, co-opting of struggles, and active pushback. We refuse to continue to remain silent and inactive.”

The petition is still active and circulating, and it can be found here. Students ultimately hope to have the course cancelled, demanding “McGill University show that it values justice, international law, and its students’ safety as much as it values academic freedom by immediately cancelling this year’s POLI 339 summer course and thereby respecting the decision made by the student councillors of the AUS council.”

Correction: This article has been updated to clarify language and the contents of the syllabus.