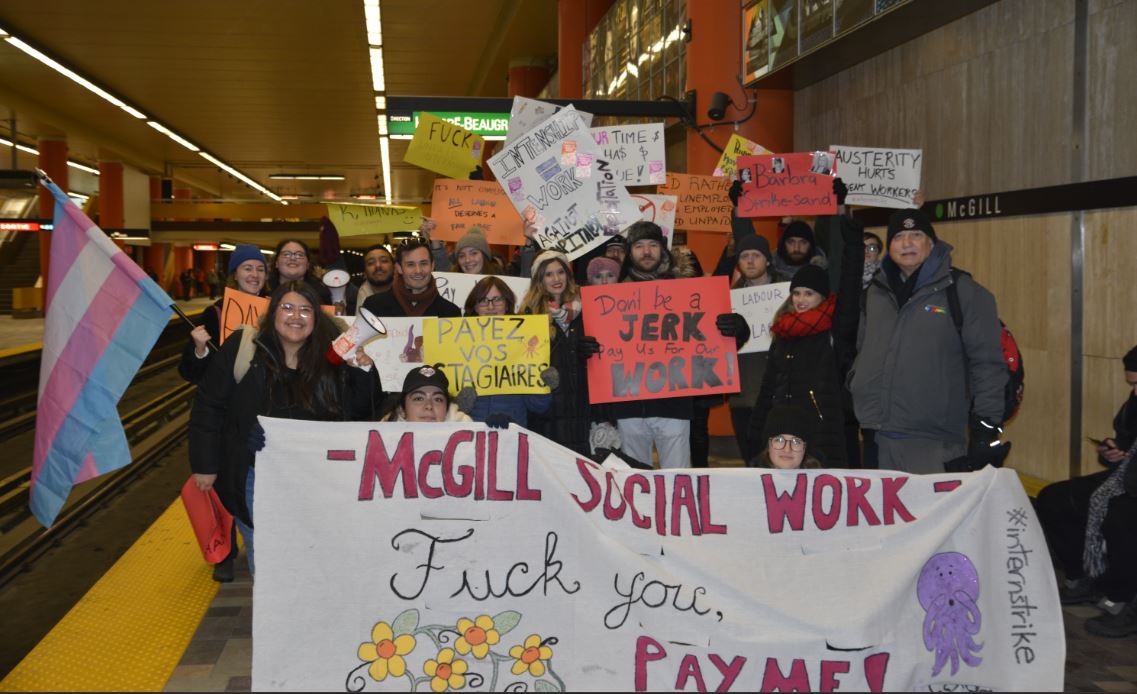 Last week, thousands of university and CEGEP students across Quebec took part in a week-long strike protesting unpaid internships. From March 18 to 22, over 35,000 university students in Montreal, Sherbrooke, and Gatineau participated in walkouts. Ahead of the provincial budget reveal on Wednesday, March 20, around 200 students marched through downtown Montreal, escorted by riot police. There was also a citywide demonstration on Thursday, March 21, in which students marched towards the Education Ministry. Last week’s strike comes following the week-long strike in November of 2018 and follows up on the ultimatum issued at the time, which stipulated that students would continue to strike until labour policies changed.

Though McGill’s Social Work Student Association Strike participated in the walkouts in November, none of McGill’s student associations took part in the demonstrations this week.

During last week’s strike, students called for labour standards to extend to unpaid internships required by degree programs, stating that current lax standards around working conditions leave students at risk. Students are also calling for the Ministry of Education to compensate interns for their work, and are attempting to put pressure on the CAQ government to respond to their demands in the provincial budget for this year. Calls to abolish unpaid internships date back nearly three years; after a General Assembly last fall, a coalition of students threatened to continue strikes if compensation programs are not put in place by the winter of 2019. The coalition of students protesting includes unions, student associations, and groups from universities and CEGEPs across Quebec.

In the 2016-17 year, almost 100,000 students in Montreal participated in internship programs each year, and only 77 per cent were paid. Many students who are currently participating in internships will be required to make up for lost work, in addition to missing classes during the strike. For degrees in fields such as Psychology, Social Work, Journalism, Medicine, and Nursing, internships are often mandatory. At McGill, students in the Social Work program are required to complete 200 hours of work in addition to their in-class studies. Nursing students in Montreal were unable to participate in last week’s strike due to their inability to be absent from their internship programs.

Despite promising students remuneration for internships in the provincial budget ahead of his election last fall, recent comments by the Quebec Minister of Education, Jean-François Roberge, suggested otherwise. More recently, however, Roberge said he did not expect the budget to include funds for internship salaries, and stated that debates will continue for more than a year before arriving at a decision. A working committee was created by the Quebec government in December in order to find working options for compensation, but is not expected to share their conclusions until mid-April. While maintaining that current conditions will have to change, Roberge did not offer concrete proposals for compensation, or when the promised plan would go into effect. The 2019 provincial budget did not, in fact, include allocations towards university and CEGEP program internships.

NDP party leader Jagmeet Singh and newly appointed deputy leader Alexandre Boulerice (MP for Rosemont–Petite-Patrie) also spoke out on the issue, claiming intentions to abolish unpaid internships completely. Boulerice expressed his desire to hire paid interns, but cited his budget, standing at $382,150 annually, and the Liberal government for his inability to do so, calling for legislation to demand all internships be paid positions. According to the Toronto Star, the Liberal and NDP spokespersons stated that their parties do not employ unpaid interns; the Conservative party declined to comment.