Protest in Solidarity with Haiti 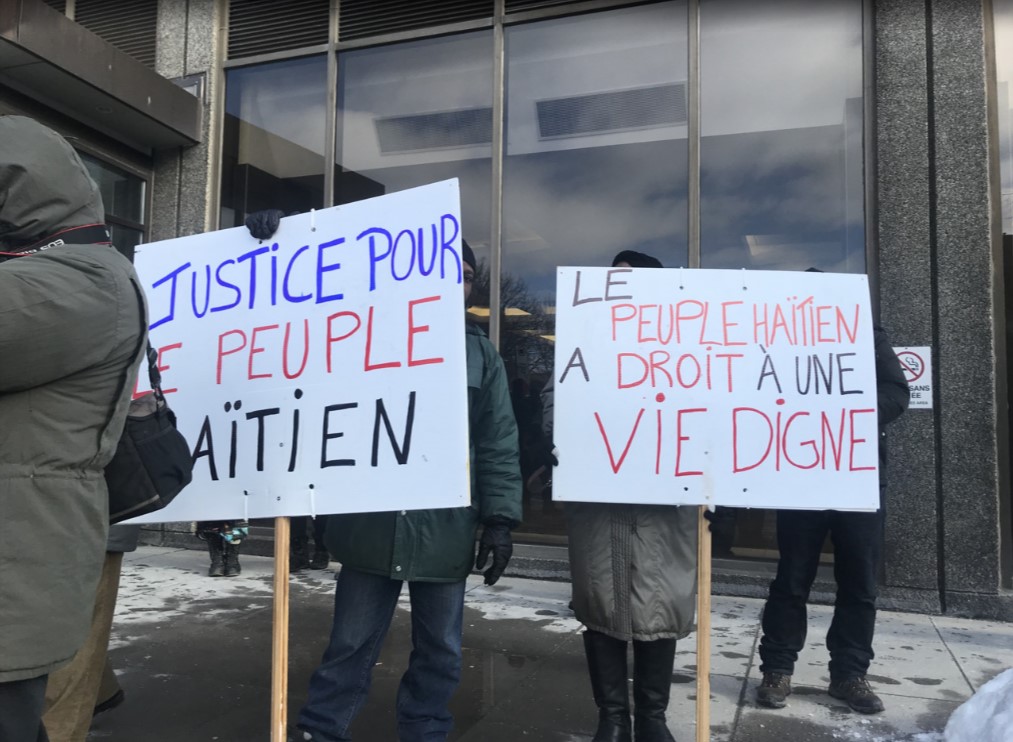 On February 16, three dozen people gathered outside the Consulate General of Haiti to protest against the current president, Jovenel Moïse, and ongoing corruption. Signs in French and Creole demanded justice and dignity for the Haitian people. Protestors included members of the Montreal Haitian community. The demonstrators aimed to express solidarity with Haiti during the current wave of protests in the nation’s capital city, Port-au-Prince. “We are here in solidarity with the Haitian people,” declared Jennie-Laure Sully, one of the organizers. “We are here to say that the demands of the people are fair; we are here to say that Canada must stop supporting corrupt governments in Haiti.”

Since February 8, the Canadian government has postponed all deportations to Haiti due to ongoing conflict in Port-au-Prince. According to the Canada Border Services Agency, deportations have been put on hold for an indeterminate amount of time. For 421 Haitian nationals, this means waiting until officials deem the country stable enough for deportations to resume.

The official protest statement, written by Frantz André, a representative of the comité d’action des personnes sans statut, refers to the election of Michel Martelly. Following a devastating earthquake in 2010, Martelly, a provocative pop-star-turned-politician, was elected as president. He was replaced by current president Moïse in 2017, who received the support of less than 10 per cent of the nation’s registered voters. Both administrations have been marked by claims of electoral fraud and corruption, and the Haitian community has been protesting against the current government and political system for months. The recent wave of protests comes on the heels of a general strike in November, a recent raise in gas prices, and a general sense of discontent with the current regime.

However, corruption in Haiti runs much deeper than one controversial election. One of the most recent scandals dates back to Haiti joining the Petrocaribe oil alliance in 2006, inspiring the slogan “Kot Kòb Petwo Karibe a” (Where is the Petrocaribe money?), a popular chant heard both at protests in Haiti and at the recent protest in Montreal. An agreement between Venezuela, the region’s biggest oil producer, and a number of Caribbean countries, Petrocaribe created a preferential payment plan in which Haiti could pay for 50 per cent of the oil purchased over the next 25 years with only a one per cent interest rate. This system has led Haiti to invest in health, education, and sanitation. A 2017 probe by the Haitian senate revealed that millions of dollars meant for the people had been embezzled.

“[In Haiti], [Haitians] are hungry [and] thirsty. It is very difficult to eat because the whole economy is paralyzed right now,” proclaimed Marie Dimanche, one of the protest organizers. The recent unrest has brought violence to the front doors of many Haitians, who live in fear of the guns and fires that have overtaken the streets of Port-au Prince. In the last week, the protests have resulted in nine fatalities and dozens of injuries, according to Al Jazeera. Despite the violence and calls for resignation, Moïse vehemently refuses to step down from his position