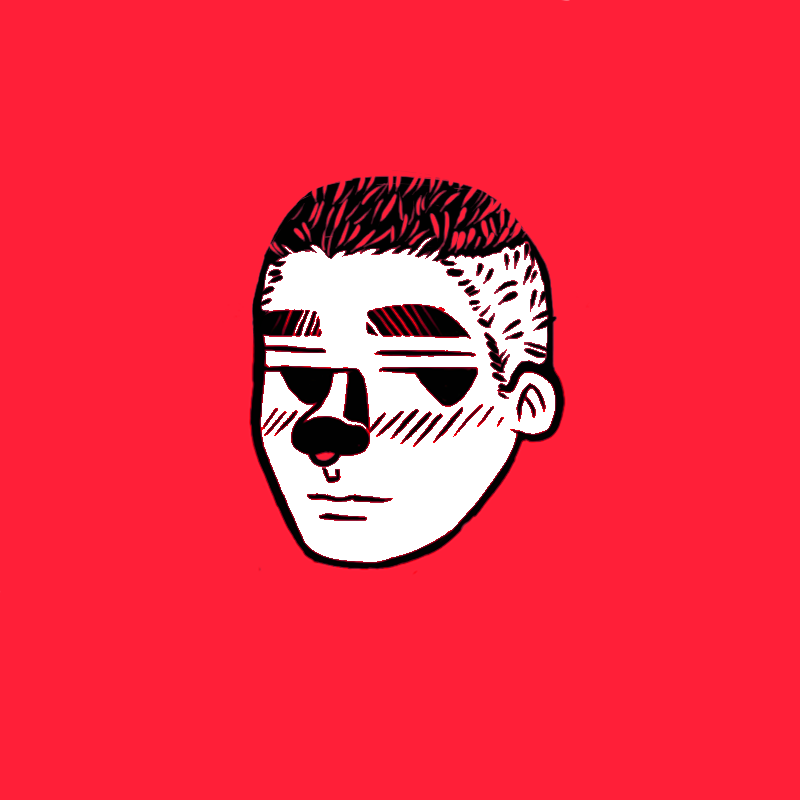 On Tuesday afternoon, I met with David at Guy-Concordia station, in the EV building. We hugged, and they were wearing the coat I gave them when I moved out of our apartment last summer. We walked through the snow to a nearby cafe, catching up on various gossip and complaining about the cold weather. Inside, the music was a little loud, but the cafe was bright and pleasant – a nice break from the cold and the soon-setting sliver of sun outside.

“Why don’t you start by introducing yourself to me.”

“Ok! My name is David González, I am Colombian but I moved to Canada six years ago, and I am currently an illustrator and visual artist in Montreal.”

David studies at Concordia, completing a Fine Arts degree with a focus on studio arts. Though the bulk of their practice is based in illustrating for school throughout the year, they also make paper and durational pieces, and their most recent one is called First Love/Late Spring. The piece consists of them writing out the lyrics to Mitski’s song by the same name in black paint onto a giant piece of paper every day for 13 days, covering the sheet completely, and doing it all over again in white. A lot of their art revolves around the concept of queer visibility, in conversation with their conservative Colombian upbringing.

“Growing up in Colombia was really difficult, because it’s generally a really conservative, really religious country, so growing up being completely and utterly gay I couldn’t really find myself there. So when I got here I was like ‘Oh! I don’t have to worry about like literally anything else. I can just make art about being gay for the rest of my life if I want to!’ And that’s what I’ve been doing.”

Early on, David had been making self-portraits as a way to not only develop their art practice, but also as a means of expressing their own gender and sexuality, depicting themselves the way they wanted people to see them. As a result of this, their art has gained a cult following of predominantly queer people on Instagram, who reach out and commission David to draw them the way David draws themself.

“Being commissioned to draw specific people makes the people in the drawings kind of part of a family, and I get commissioned a lot to draw drag queens as well as trans and genderqueer people, I assume because they are able to see themselves in my art style. It’s really fun and I like to use thick lines, bold colours, and hard-to-miss bright white highlights.” The art David makes is all about being seen, being gay, and standing out. Each piece carries a lot of symbolism, like the constantly recurring symbol of the snake, which David traces back to their upbringing in Colombia.

“Growing up, my grandma always told me snakes are evil – of the devil. Later on I realized that they aren’t evil at all, just kind of misunderstood. The historical depictions of it as being a monster is what really attract me to it, so I started putting snakes everywhere because I felt like, ‘that’s me!’ […] The last piece that I worked on was a series of 13 illustrations based on a book called La vie et ses merveilles, and it’s all cutouts of the book that I redrew. It was all tiny little naked guys, but I made them just fully gay. Then I layered text on top of each piece that said: ‘commit a sin twice and it will not seem to you a sin.’ When I was growing up that was kind of a warning: don’t do this because, if you do, you’ll stop feeling bad about it and you should feel bad if you’re doing these things. But I just switched it to say ‘yeah it doesn’t feel like a sin because it’s not.’”

Using Instagram as a tool for sharing their art and growing their brand, they have been able to play with the concept of gaze and visibility through intertwining pictures of themself with drawings of their following, setting the spotlight on their shared queer experiences in the multitudes of forms they come in. It’s been a way for them to create a community to see and be seen, in a veritable garden of queer identity.

“My art is about my personal experiences and a piece starts as an autobiographical thing always… for example, I did a series where I inserted myself into a bunch of music videos in the places of the characters. I have a strong desire to see myself on paper.” David’s art tells a story of long-awaited openness towards one’s gender and sexuality in an eruption of genuine playfulness and eroticism.

In the summer, David wakes up, goes for a hike, comes home to draw for three to four hours, then has a coffee and draws for another three to four hours, totaling about seven hours a day illustrating at their desk. “A lot of my art has been about obsession, about repeating the same thing over and over, and how that helps me heal from trauma. I’m not very good at talking about my feelings. I use art to communicate and to heal in the process, so all my art is meditative at the core.”

David goes by the name @hypermasc on all their social media, and we have compiled some of our favourite pieces by them
in the following pages. 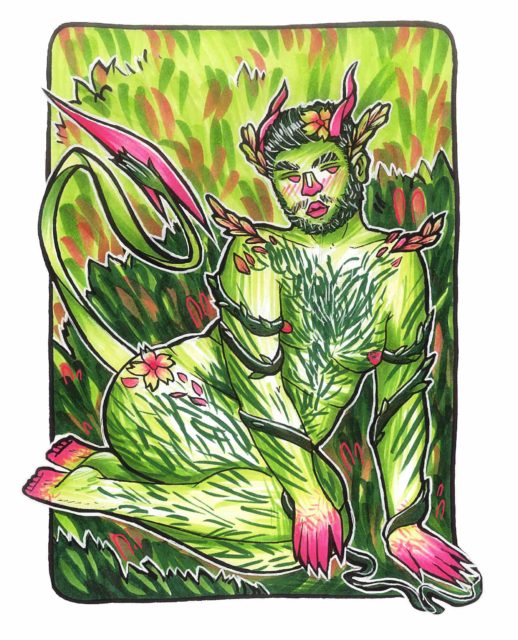 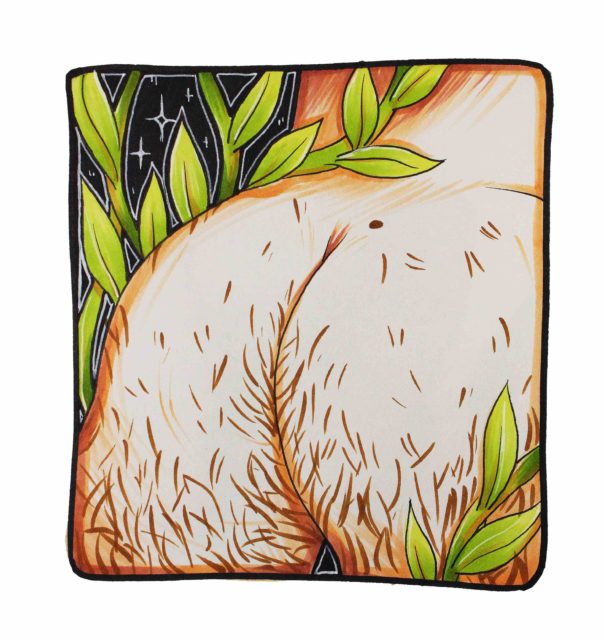 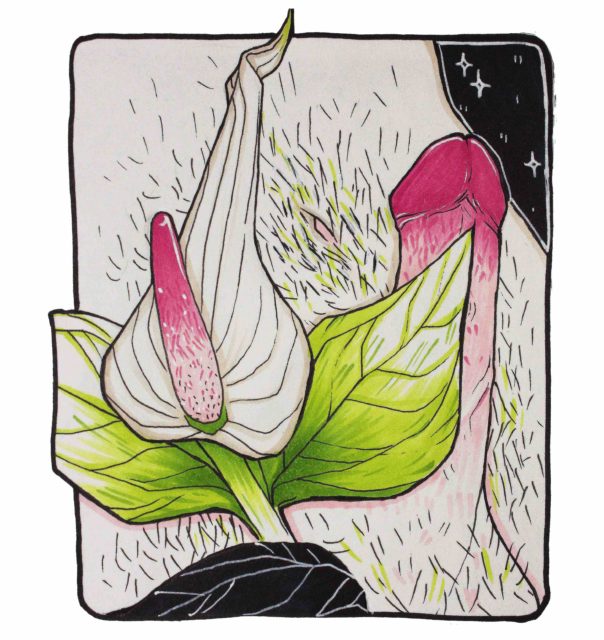 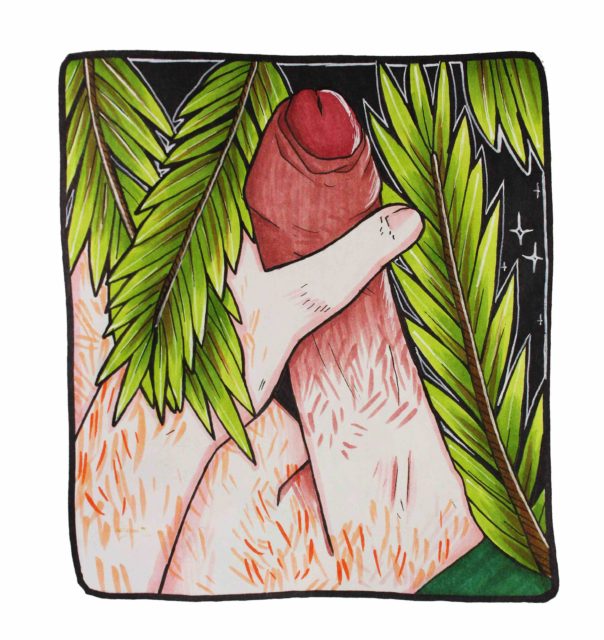 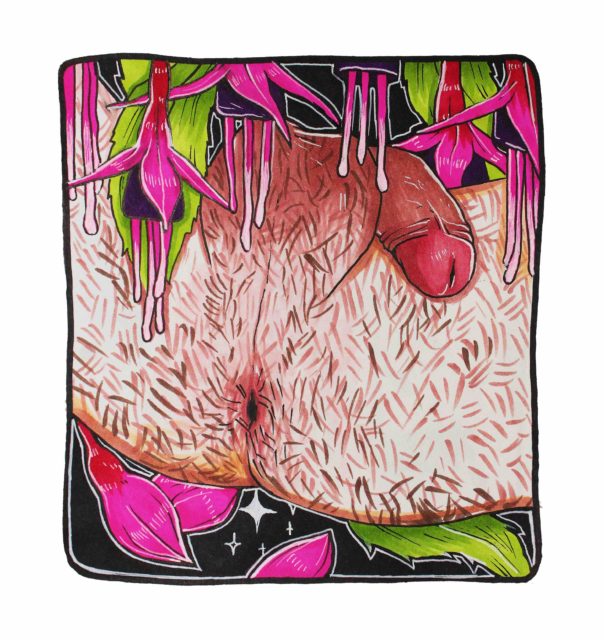 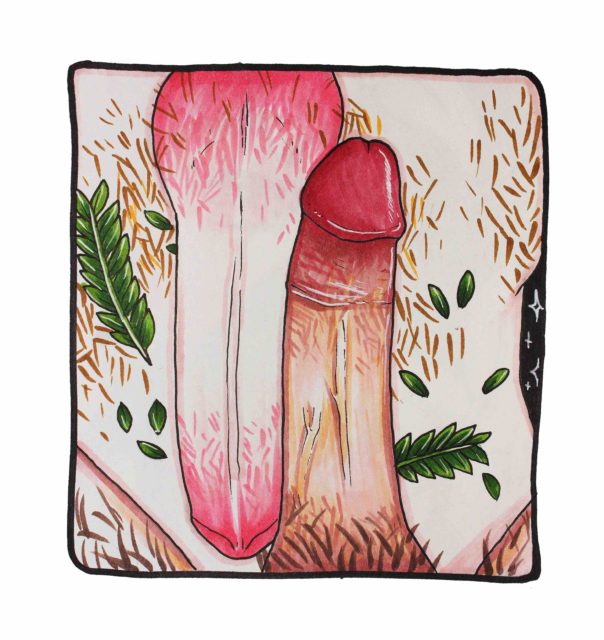 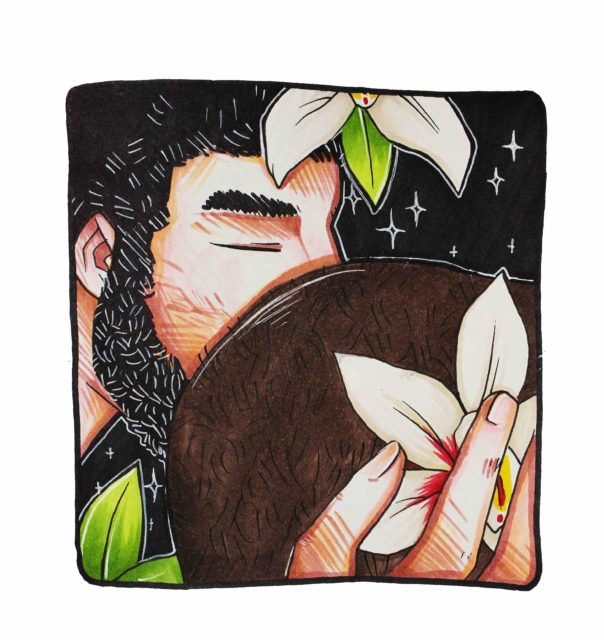 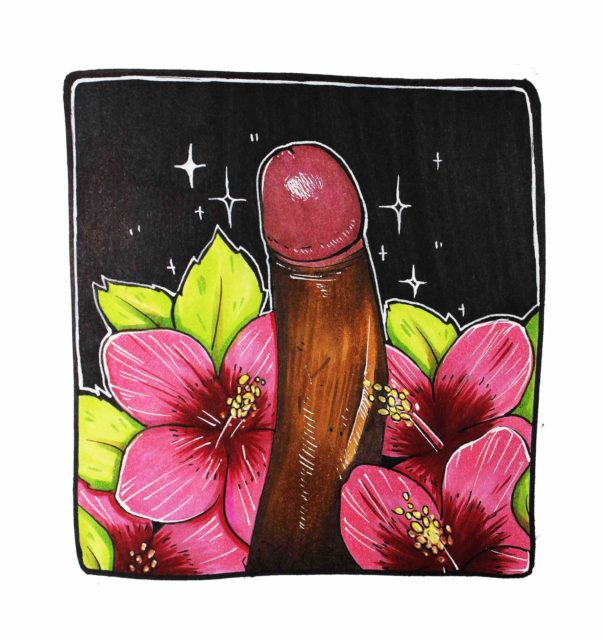 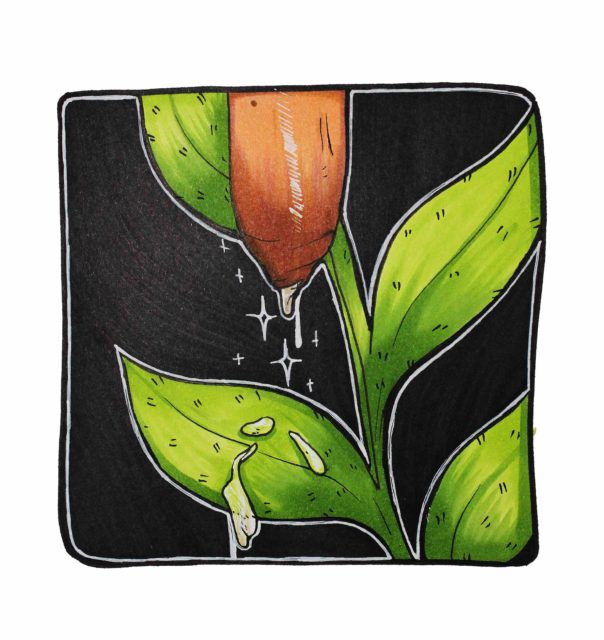 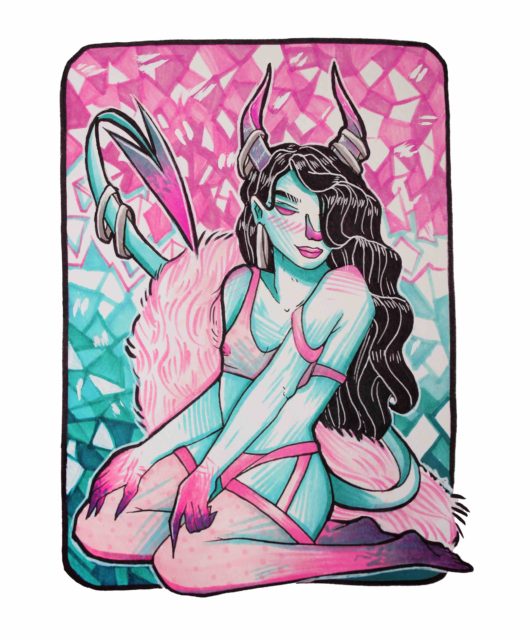 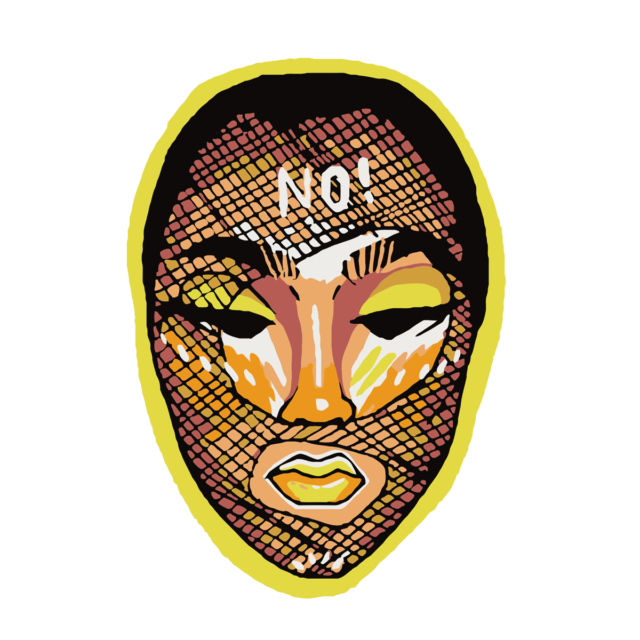 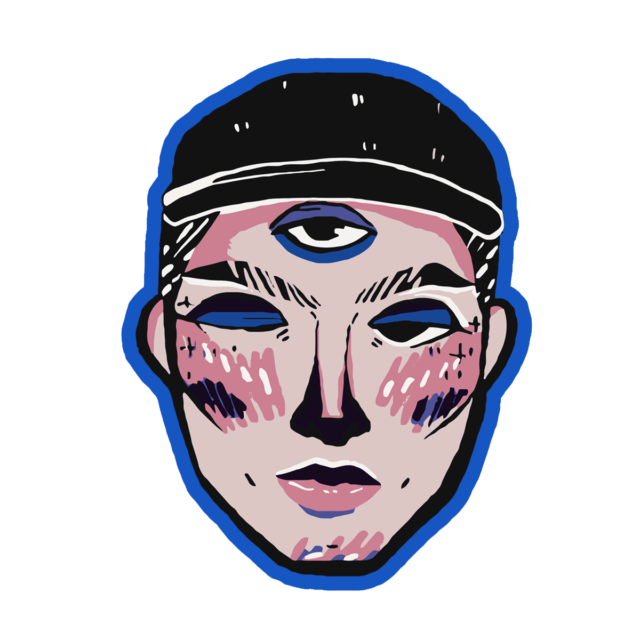 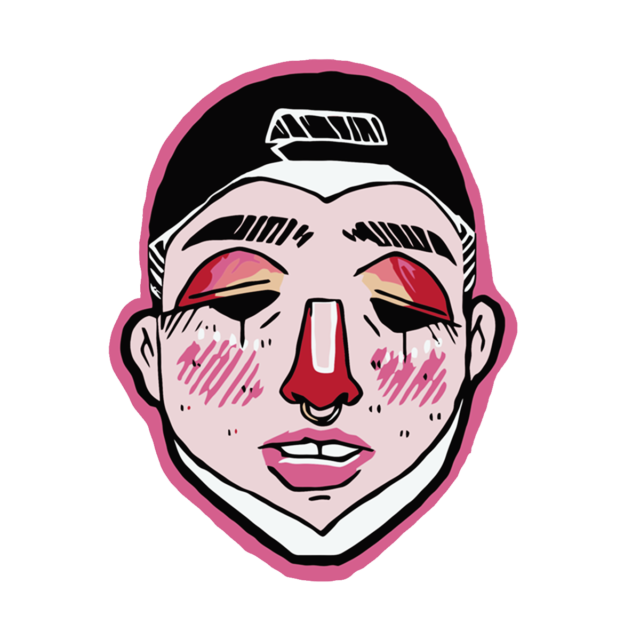