The Making of the Milton-Parc Cooperative Movement 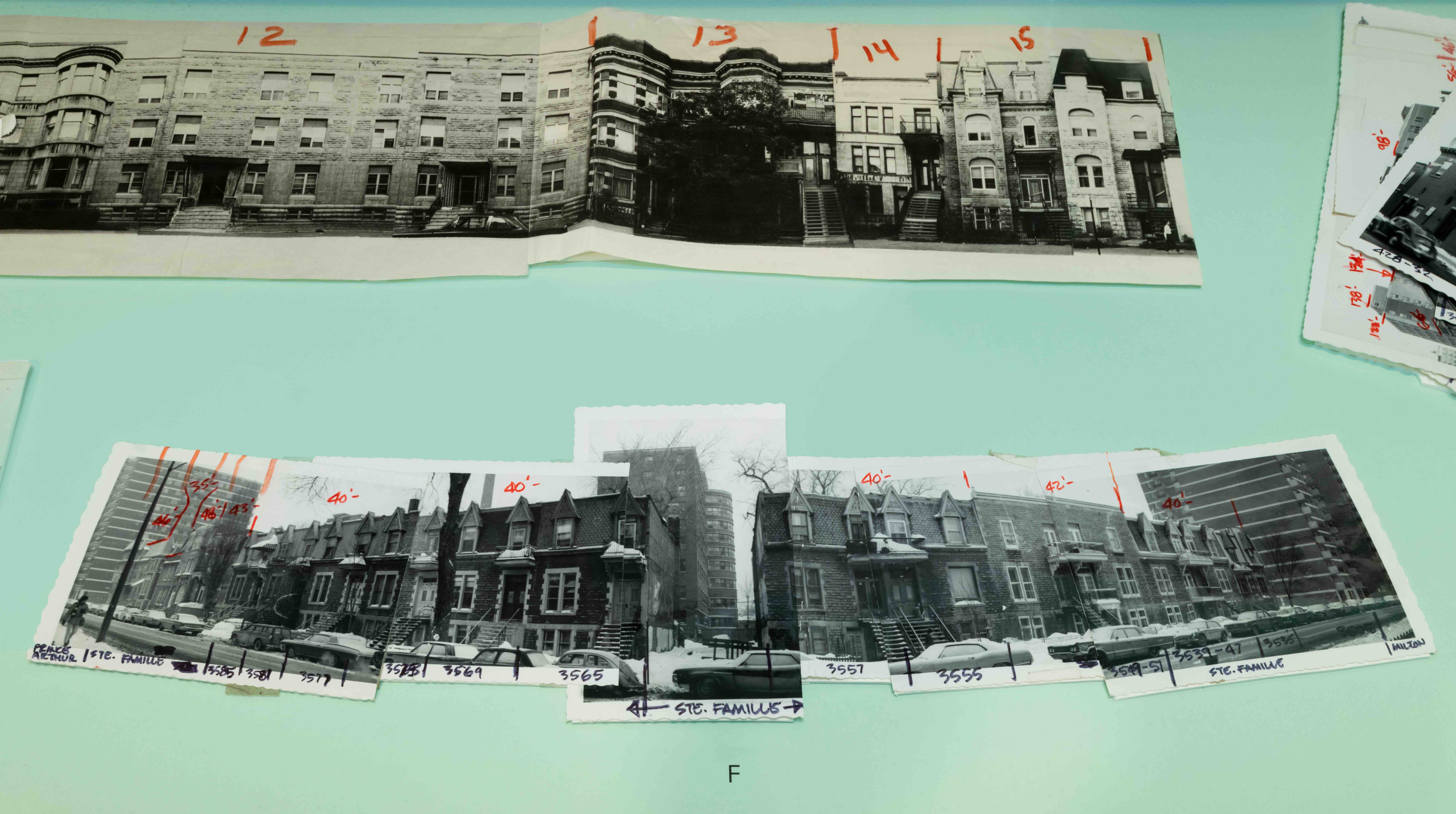 Milton-Parc: How We Did It is an exhibition at the Canadian Centre for Architecture (CCA) that tells the story of how Milton-Parc residents halted developers’ plans to demolish their community. In the process, they began a collective movement that continues to advocate for the residents of Milton-Parc, and engage with them through petitions and workshops. The exhibit is curated from the CCA archives by Dimitrios Roussopoulos, Josh Hawley, John Goedike, and Hassoun Karam.

The central narrative of the exhibit is told through a 70 page spiral-bound booklet published and written by members of the Milton-Parc Citizens Committee (CCMP; Comité des citoyennes et citoyens Milton-Parc). The booklet intends to remind members of the Citizens Committee of their own history, as well as to disseminate Milton-Parc’s history to a wider audience. As an ode to the collective efforts of this movement, the book does not name a single individual throughout the telling of this history.

The history of Milton-Parc has largely been obscured by complicated legal jargon that renders it inaccessible to the broader public. Fortunately, the booklet is incredibly effective in simplifying legal terms and the sequence of events, and helped to inform much of the history described in this article.

Milton-Parc residents halted developers’ plans to demolish their community and began a movement that continues to advocate for residents today.

In 1968, a group of developers, who would later become known as “Concordia Estates Ltd.,” announced plans, backed by Jean Drapeau’s city administration, to tear down six blocks of residential buildings. Prior to this announcement, the developers had spent years inconspicuously buying properties within the neighbourhood. These six square blocks, an area marked within the limits of Milton, Hutchinson, des Pins, and Sainte-Famille, were to become grand apartment buildings, high-rise offices, and commercial shopping complexes. The exhibit at the CCA displays the developers’ proposed plans as well as photographs of a 3D model of their plan.

From the onset of the plan’s reveal, the Citizens Committee began organizing active resistance through what they described as non-violent “militant action.” This included petitions, marches, sit-ins, and the formation of housing cooperatives. Housing cooperatives are a form of collective home ownership where members are often united by shared economic, social, or political needs. Within one home, they pool their resources to create a space for members’ needs to be met. Members of a cooperative will buy in and own a share of the cooperative.

As the Committee organized itself, the developers carried out phase one of their three-part plan. Among the buildings constructed during this phase were a hotel, now McGill’s New Residence Hall, the underground mall now known as Les Galeries du Parc, and the La Cité apartment high-rises.

Shortly after, Concordia Estates Ltd. ran out of funding and put the remainder of the property up for sale. The Canadian government bought the property in 1979, via its Canada Mortgage and Housing Corporation, with the intention of helping residents form cooperatives. The Citizens Committee’s mission evolved into seeing the formation of cooperatives and nonprofits through, and they started the Milton-Parc Housing Project.

Six square blocks, an area marked within the limits of Milton, Hutchinson, des Pins, and Sainte-Famille, were to become grand apartment buildings, high-rise offices, and commercial shopping complexes. The exhibit at the CCA displays the developers’ proposed plans as well as photographs of a 3D model of their plan.

In time, the group created a set of agreed-upon social values; they wanted each cooperative group to have full ownership over their property, rather than being controlled by a larger entity. They urged the government to impose restrictions that would ensure the preservation of the heritage of the buildings. They also wanted to be assured that the housing would remain affordable despite the properties’ inevitable appreciation of market value over time.

The group worked to configure the legal ownership and financing of these cooperatives in a way that allowed them to work in tandem with their established set of values. The significance of this project is the steps the Citizens Committee took to accomplish this, despite the lack of a preexisting legal framework that could outline all that they were trying to achieve. They created a “Declaration of Co-ownership,” which granted each cooperative ownership over their own building and its land. Through this configuration, they could ensure the historical preservation of the buildings, and their heritages, without submitting to being governed by a larger entity. Instead, the declaration created a governing body made up of representatives from each of the cooperatives that collectively own and manage the properties, called the CMP (Communauté Milton-Parc), which remains intact today. The land in front and behind each building is collectively owned by the CMP. The declaration also set out legally binding conditions that members had to abide by, such as allocating a certain portion of vacant space to low-income residents. Once adopted as a bill under the Quebec National Assembly, it became the legal governing framework of the cooperatives.

The Committee’s activism did not stop with the establishment of the cooperatives and nonprofits, however, and the streets that surround McGill function as testament to the efforts of countless individuals over the span of many years. Sit-ins by the Milton-Parc Citizens Committee are the reason why the top section of Jeanne-Mance, near des Pins, is closed to traffic, and why Hutchinson is a one-way street, as well as why its intersection with des Pins has been reduced to only one lane. The Committee can also be accredited with the plaque on the exterior wall of La Cité, which acts as a token of reconciliation between the Citizens Community and the initially unwelcome apartment complex. Yellow Door, a nonprofit on Aylmer, was awarded property through the Committee’s Milton-Parc Housing Project, and remains a significant legacy of this cooperative movement.

As the Committee organized itself, the developers carried out phase one of their three-part plan. Among the buildings constructed during this phase were a hotel, now McGill’s New Residence Hall, the underground mall now known as Les Galeries du Parc, and the La Cité apartment high-rises.

The photos in this exhibit show a version of Milton-Parc that is uncannily similar to the one that exists today, diverging from the common use of visuals within the retelling of history to portray how drastically things change over time. Instead, the images show how little has changed, and pushes viewers to recognize the community responsible for preserving the neighborhood.
This exhibit forces its viewers to recognize the history of struggle behind the neighborhood that many members of the McGill community reside in. It also reminds us of the effectiveness of direct action and non-violent forms of protest, as well as the spirit of community behind the Milton-Parc area as it stands today. The efforts of the Milton-Parc Citizens Committee should guide us when property developers inevitably return to our communities.

Milton-Parc: How We Did It runs until March 17 and is open to the public, free of charge. For more information, visit the CCA’s website at cca.qc.ca.