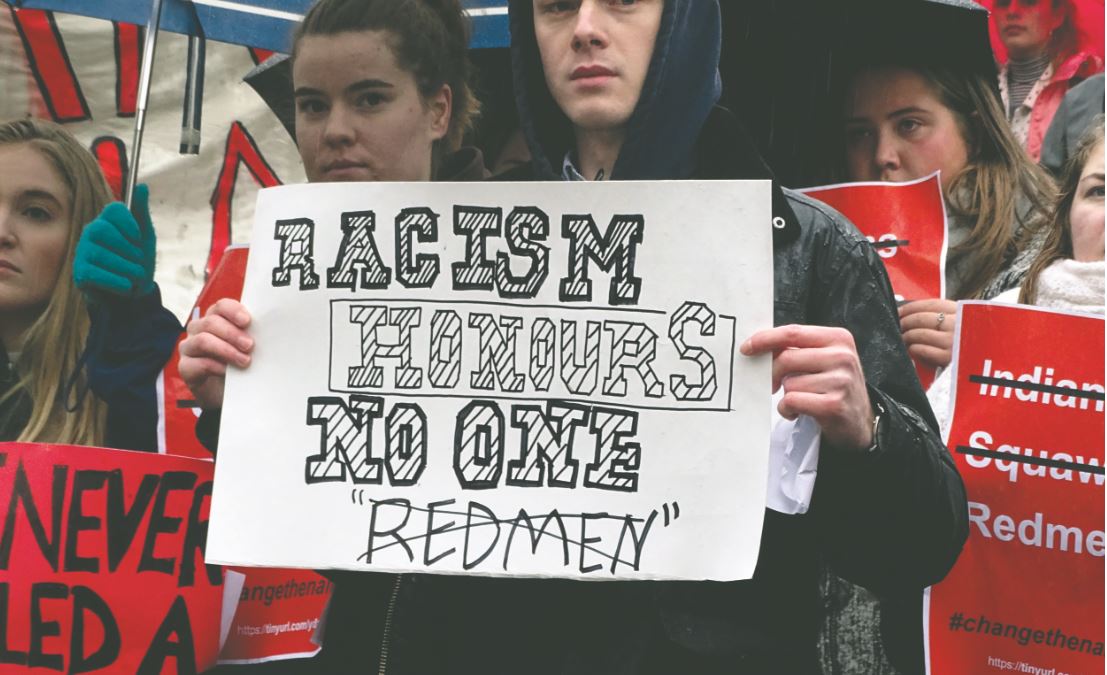 On October 31, under the pouring rain, hundreds of students gathered at Community Square to take part in the #ChangetheName campaign. The “R*dmen” name, which is rooted in the stereotypicalized and historically racialized image of Indigenous peoples, currently designates all the McGill men’s varsity teams.

Slogans shouted in the demonstration include “Change the name today” and “Hey hey, ho ho, the R*dmen name has got to go”. The demonstration started with an Indigenous men’s drumming circle, which included McGill students. Students held a multitude of posters supporting the cause. Some said, “Not Your R*dmen,” and one proclaimed, “Intent Does Not Erase Impact.”

Tomas Jirousek, the leader of the #ChangetheName campaign, the SSMU Indigenous Affairs Commissioner, and an Indigenous varsity rower, led the demonstration. Jirousek welcomed everyone to the demonstration, then gave the stage to Nakuset, Executive Director of the Native Women’s Shelter of Montreal. “You don’t understand how hard it is to speak about our injustices because they are always ignored,” she said, “the struggles we go through are not what this university really wants to have as a team name, […] we are struggling and you are wearing our name like it’s some kind of badge and it doesn’t belong to you.”

Ella Martindale, co-chair of the Indigenous Students Alliance (ISA), from the Cowichan nation in British Columbia, described how the “R*dmen” name affects her life: “it connects to identity. Who am I? What am I doing here? Do I really belong here at McGill?”

The Black Students’ Network (BSN) of McGill spoke in solidarity with #ChangeTheName demonstration. Abdel Dicko, VP Political Coordinator of BSN, stated “we, the BSN, firmly believe that the ‘R*dmen’ name and the very significant weight it carries does not have its place at this university. Just like any other unambiguously derogatory racial slur, the ‘R*dmen’ name has been harmful and this needs to stop immediately.” Joshua Archibald, a varsity athlete on McGill’s football team, raised his voice on the issue, “First Nations are patronized by being referred as ‘R*dmen.’ By changing the name we will send an important message that they are welcomed, included, and valued. […] With my support and along with the support of many student athletes, I think it is time for a change.”

Jirousek invited everyone to sign the online petition on change.org and the open letter urging the university to change the name. As of November 1, the online petition has already reached 9,000 signatures. Jirousek also strongly encouraged every student to vote “Yes” on changing the name in the upcoming SSMU referendum, which will be held between November 9 and November 12. In his closing statements, Jirousek asserted that “the ‘R*dmen’ name is not the end, Indigenous students will not stop fighting […] until we see ourselves reflected in every level […] of the university. […] Truth before reconciliation and the truth is this name is hurtful and it is time for the ‘R*dmen’ name to change.”