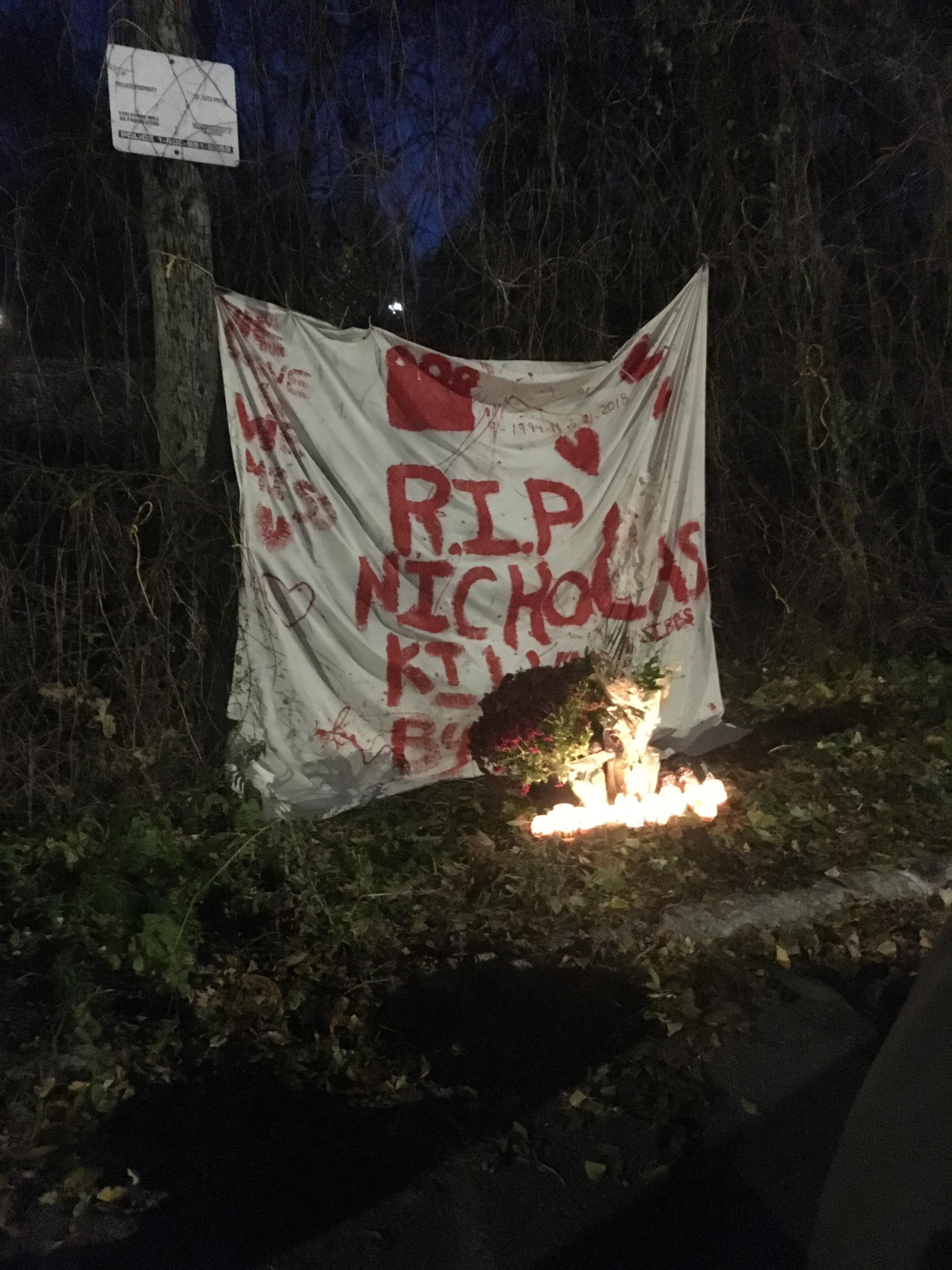 On November 4, family and friends of Nicholas Gibbs, as well as members of the public, gathered in Trenholme Park to honour his life. Approximately 150 people attended the vigil. The Notre-Dame-de-Grâce (NDG) park was a block away from where Gibbs was fatally shot by the Service de police de la Ville de Montréal (SPVM) on August 21.

On August 21, the SPVM were called to “break up a fight” on Montclair Avenue and Maisonneuve Boulevard. The police allege that Gibbs had a knife, that lethal force was necessary in the altercation, and that they acted in self-defence. In a video released by the Gibbs family, taken by a witness from a nearby apartment building, police are heard saying that Gibbs has a knife, but the knife is not visible in the video. The video shows that the SPVM made no visible attempt to de-escalate the situation. It also shows the SPVM shooting Gibbs five times, including once in the back.

The family of Nicholas Gibbs is now suing the city for his death. In court documents, they say police used “excessive and disproportionate force.” They are seeking $1,035,000 in moral damages and $100,000 in punitive damages, as well as interest and legal costs.

The November 4 vigil began at Trenholme Park, where tea and coffee were provided by organizers Head & Hands and Rest to Resist. Joseph Aniataraken, a Mohawk Elder from Kahnawake, opened the gathering by giving thanks to land and nature, Anna Aude from the Black Indigenous Harm Reduction Alliance gave a land acknowledgement, and Marlihan Lopez from Black Lives Matter Montreal spoke about police violence in Montreal’s impact on those at the intersection of race, mental illness, and class.

Participants then marched north on Park Row East to Sherbrooke, east on Sherbrooke to Montclair, south down Montclair to Maisonneuve. The SPVM closed off all relevant streets and guided the march, but kept their distance as marchers chanted “Black Lives Matter” and “No Justice, No Peace. Fuck the Police.”

At the site of Gibbs’ death, members of Gibbs’ family spoke: his nephew Jeremy, his sisters Tricia and Tamesha, and his mother Erma. Jeremy Gibbs thanked everyone for coming, and said that “seeing everyone here made [him] realize that people cared.” He expressed grief at his uncle’s death, saying “half of me is gone.” Erma Gibbs said “the police had no right to kill my son.”

The procession then walked along Maisonneuve  back towards Park Row East. An open mic was established: participants performed poetry, read their work, expressed solidarity with the family, and encouraged people to donate to the Gibbs family’s GoFundMe.

In an interview with the Daily, Marlihan Lopez from Black Lives Matter Montreal reiterated a sentiment expressed by many of Gibbs’ family members: “police should not be first responders to mental health crises. This has to stop. They’re not equipped to address these crises. We know that racial bias contributes; it intersects with ableism.” Many family members talked about Gibbs’ history of struggling with mental health problems, but focused on the SPVM’s inability to address the situation.

All speakers emphasized that the SPVM has proved that they are not competent first responders. Erma Gibbs said that police need to be better trained, especially since they wield weapons. As it stands, she said, “the police cannot be trusted.”