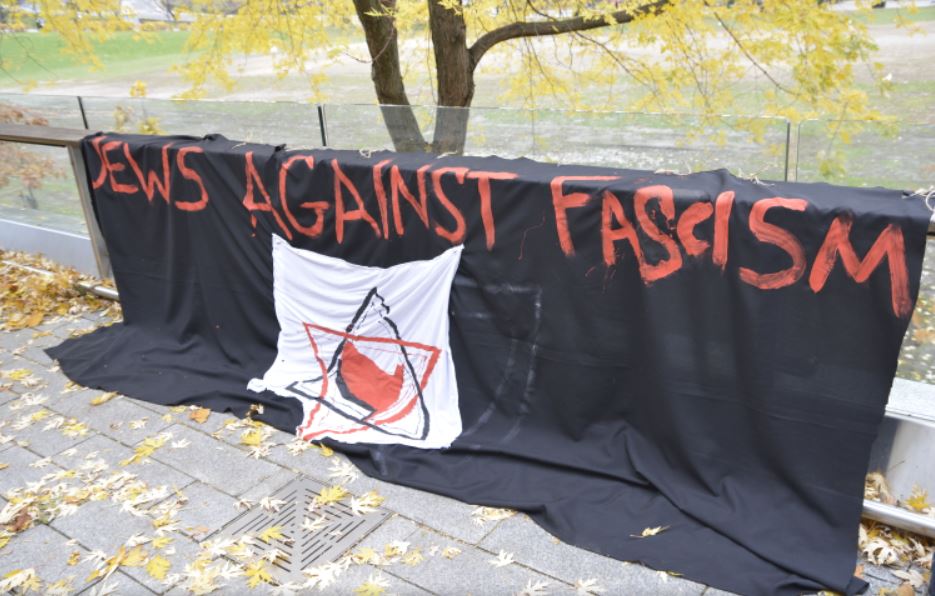 On November 9, students at McGill and Concordia organized banner drops to commemorate the 80th anniversary of the Kristallnacht. The Kristallnacht, or The Night of Broken Glass, was a pogrom against Jews throughout Germany and German-controlled territories on the night of November 9-10, 1938. Synagogues were burned, Jewish owned businesses were looted and vandalized, and many Jewish homes were attacked and destroyed. At least 91 Jews were killed, 30,000 Jewish men were sent to concentration camps, and many others were tortured and raped.

At McGill, students gathered in front of the main entrance to the McLennan Library. The banner, placed along the railing on the pathway leading to McLennan, read “Jews Against Fascism,” with the Antifa flag within a Star of David. Abigail Drach opened with the lines: “we gather to show that the Jewish anti-fascist resistance is still here, and that we will outlive them.” The protest lasted about 70 minutes, during which time, those gathered sang “Ale Brider,” “Oyfn Priperchik,” “Ose Shalom,” “Partisan Lid,” and “This Little Light of Mine.” They also distributed flyers to people passing by. Drach told the Daily that they “received a lot of support from students passing by.” Within an hour of leaving the site, their banner – which had been left up – disappeared.

Drach also told the Daily how the presence at the banner drop of Arts Representative to SSMU, Andrew Figueiredo affected the demonstration. She said that she was concerned when she saw the representative “taking pictures of the banner and the people gathered around it, who were mostly Jews and/or POC.” She further stated that “he called to us ‘smile’ in a tone that made [her] feel threatened. Such behaviour, regardless of intention, is completely inappropriate at a Holocaust commemoration where people are grieving massive loss of life. Moreover, the dynamic of a non-Jewish white man surveilling a group of predominantly Jewish and/or POC non-men at an antiNazi event is disturbing.”

Representative Figueiredo responded to the statements in an email to the Daily, saying that “I can be found attending or observing events hosted by a variety of groups to better understand different perspectives. I took one picture of the rally and greeted those in attendance. I’m a friend of the Jewish community and will always advocate for the best interest of Arts students and McGill community more broadly.”

At Concordia, students unfurled a banner from the balcony of the mezzanine of the Hall Building which read “Jewish Anti-fascism,” with similar imagery to the banner at McGill. Then, from the ground floor, Tali Ioselevich gave a speech. In their speech, they said “[on the anniversary of the Kristallnacht,] we are reminded that the same words that were used to persecute Jews and deny them entry into safer countries as refugees in the 20th century are being revived today to persecute and deny safety to people of many religions and ethnicities.” Participants sang “Ale Brider.” Ioselevich then reread the speech, so that it would be heard by a new wave of passerby.

Both protests disrupted foot traffic. Both also emphasized the importance of contemporary antifascist organizing. Ioselevich said “the memory of Kristallnacht moves us to highlight the rise of fascism today. […] This is not history; this violence is our reality.”