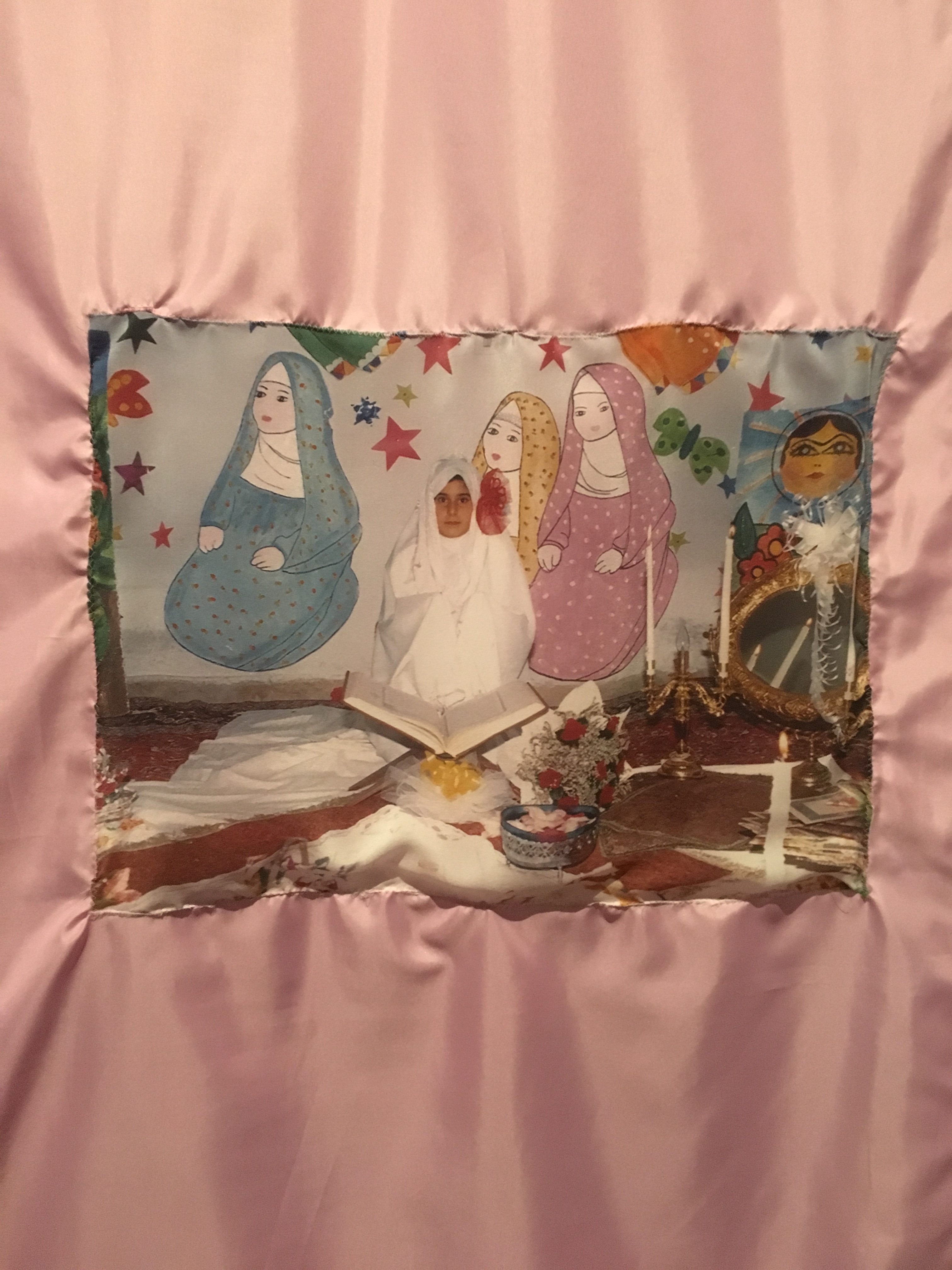 Jashn-e-taklif, or simply taklif, is a ritual established by the Iranian government following the 1979 Revolution. Young girls, upon turning nine years old, take part in a ceremony in which they wear a white chador (a long scarf that covers one’s entire body, leaving only the face), recite prayers, and are celebrated by family and friends for reaching the age of “maturity.” This practice signals the coming-of-age of young girls, making them legal adults. Iranian girls over the age of nine may be charged with crimes, can be married off with their father’s permission, and are required to begin covering their bodies and wearing a hijab. taklif does not extend to young boys, who are not considered adults until the age of 15. Despite the collective impact taklif has made on Iranian women since the 80s, we still know very little about it and its effects.

On November 8, Concordia University hosted an exhibition titled Taklif: Ideas of Femininity, in partnership with Taklif, “an artist-run initiative dedicated to […] learning, unlearning, and relearning practices through art and dialogue,” which offered viewers alternative understandings of the ritual. The exhibit consists of insight into the taklif ceremony through the display of vintage photographs and homemade videos, as well as literature on the social and political contexts of the practice. The mood is set by the voices of Iranian women telling stories about their experience of taklif. The following day, Concordia held a panel discussion, featuring eight women who spoke candidly about the effects of taklif on young women and on modern Iranian society.

Western Perceptions of the Middle East

For women involved in the curation of the exhibition, the goal for the project was to create a non-Western common collective of personal stories and experiences — an experience that is often taken and appropriated to feed Islamophobic discourses. The propagation of the stereotype of the “oppressed Muslim woman” and the “oppressive Muslim man” has been used for decades to promote a worldview that the East needs to be saved by the West. This worldview affirms that only the enlightened Westerner can free the Muslim woman from the fetters of her patriarchal religion and that Western feminism can save Muslim women. Kanwal Syed, a speaker on the panel, highlighted this perception by discussing the Western “homogenized view” of the oppressed Muslim woman that was spread after the September 11 attacks. This homogenization ignores the role of Western intervention and colonization in the Middle East and has been used to distinguish the East from the West by placing Western civilization on a moral pedestal. This moral division dehumanizes Middle-Eastern people and normalizes violence against them under the guise of “saving them” or “spreading democracy.”

For centuries, history has been dictated by scholars that have stopped marginalized communities from telling their own stories. These communities have either been ignored and written out of history or characterized as criminals.

The discrimination and oppression that Iranian women have faced from the government and from men, however, is not a tool for the West to further their own agenda. The injustices that Iranian women have faced are their own experiences to discuss, heal from, and reclaim. Iranian women need little from the West but the chance to tell their own stories in their own words. Setareh Arashloo, another speaker, discussed the fact that many of the campaigns to end the mandatory hijab are created and funded outside of Iran. These campaigns do not aim to start a conversation within Iran’s social dialogue, but simply demand immediate action. Arashloo stated that the campaigns “isolated crucial voices” and promoted their “views from a colonizing perspective,” instead of empowering the voices of women directly affected by taklif and the mandatory hijab. This is not the first time Iranian women have been used for someone else’s agenda; during the rule of Reza Shah (1925-1941), women were not allowed to wear the hijab in order to promote Western dress. This ban of the veil meant than women who chose to wear hijabs could not participate in public life, as women who went out wearing the hijab risked getting fined or imprisoned. Iranian women deserve the freedom to choose to veil or not, but time and again the decision has been made for them.

Elham Beygi, one of the presenters, spoke on the enforcement of mandatory hijabs on young Iranian girls following the ritual, asserting that “male power is perpetuated by regarding women as objects that men act on, and react to, rather than as actors themselves… when women are considered as objects, their appearance becomes a crucial matter to authoritative power.” In this sense, appearance becomes a means of control, with the government ensuring that there is a gendered power imbalance within each generation.

The propagation of the stereotype of the “oppressed Muslim woman” and the “oppressive Muslim man” has been used for decades to promote a worldview that the East needs to be saved by the West.

Jairan Gahan furthered the discussion on the use of women as means to promoting a state agenda by mentioning sex work. She talked about the Red Light District (Shahrinaw) in Tehran, which was home to many sex workers, and stated how they were simultaneously viewed as “subjects of compassion” and “targets of resentment.” This dual perception of sex-workers allowed the government to shut down hospitals that treated sex workers, restrict electricity in the district, and eventually demolish it, all in the name of “saving” sex workers. They ignored the women who voluntarily chose sex work, and instead painted an image of all sex workers as being forced into their jobs. The government wished to impose a view of itself as a benevolent “welfare state,” while blurring the lines between forced and voluntary sex work and labelling anyone who chose sex work as a source of contamination to society.

Iran’s history of stripping marginalized communities of agency extends beyond women; queer, transgender, and non-binary people are also disenfranchised. During the panel, Noor Bhangu talked about her work as an art curator, where she focuses on the presentation and perceptions of marginalized bodies. Her curations have created a space for and representation of these bodies, regarding “the body as a living medium that threatens the ghosts of archives.” For centuries, history has been dictated by scholars that have stopped marginalized communities from telling their own stories. These communities have either been ignored and written out of history or characterized as criminals. This tactic of intimidation has been used to diminish marginalized voices that challenge systems of power and inequality. Bhangu’s work allows these bodies to tell their stories and threaten the validity of the archives that have historically excluded them.

Moreover, many activists today use visual art to make a point. Syed discussed contemporary art by Pakistani women, and the images and symbolism often present in their work. She mentioned three common patterns that presented themselves in the artwork of women like Aisha Khalid and Risham Syed, namely, the resistance and agency of the artist, a performative aspect, and continuity or repetition. The process of textile-making is also centred around the work of women — women picked cotton, turned it into thread, and made it into beautiful textile patterns. However, Khalid’s work demonstrates another aspect of this process. Her piece, titled “Kashmiri Shawl,” depicts a long scarf with pointed, protruding blades on its back, which are initially unseen by the viewer. This sharp contrast between the shawl’s beautiful colours and its deadly needles simultaneously signify the fact that these women’s scarves are bought by many consumers worldwide, yet there is a lack of concern for the issues these women face every day.

Elham Beygi, one of the presenters, spoke on the enforcement of mandatory hijabs on young Iranian girls following the ritual, asserting that “male power is perpetuated by regarding women as objects that men act on, and react to, rather than as actors themselves… when women are considered as objects, their appearance becomes a crucial matter to authoritative power.”

The speakers also remarked how they are often restricted to using the English language and how spaces to talk about one’s experiences in their mother-tongue are needed but lacking. Arashloo further discussed the fact that Iranian women do not share a collective narrative; they have stories and opinions that differ and cannot be reduced to a single narrative. Generalizing the experiences of different women creates false stereotypes and excludes Middle Eastern and South Asian women from discussions about feminism in their own communities. This exhibition highlights that silencing women of colour in their own stories is the opposite of allyship. Feminism is multifaceted and goes beyond the Western narrative. In this sense, Taklif: Ideas of Femininity affirmed that non-Western women have been and will continue to be the voices of their own movements.