Art: A Vehicle for Science 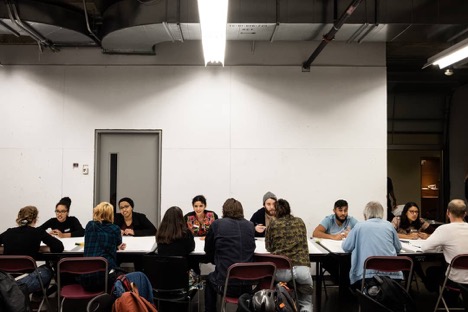 Neuroethics is a rapidly-emerging discipline examining the impact of neuroscience and neurotechnology on human livelihoods. The field aims to answer questions like: can brain scans be used to determine innocence or guilt in a court of law? Do personality changes resulting from Deep Brain Stimulation change a patient’s identity? Some of these questions remain abstract, yet many are pertinent in the creation of policies that govern our society. As I’ve recently learned, neuroethics is also an excellent topic for “speed-dating.”

On October 19, Dr. Siddharth Ramakrishnan, a neuroscience professor at the University of Puget Sound in Washington, gave a seminar at Concordia University on how art can be used to convey ideas in the field of neuroethics. The talk was held in partnership with Convergence Initiative, an organization that promotes collaboration and exchange between the arts and sciences. Open to the general public, it was attended by a diverse group of over 90 individuals in various fields, such as neuroscience, fine arts, medicine, and philosophy. A “speed-dating” event was held after the talk, where attendees were randomly paired up to have 5-minute discussions on the lecture topics. Guests were encouraged to contribute their thoughts and ideas through either writing or drawing onto a communal sheet of paper.

Dr. Ramakrishnan asserted the importance of neuroethics in our everyday lives. As our technology evolves, new policies need to be developed to govern their use. Ramakrishnan gave the example of ethical issues pertaining to Brain-Computer Interfaces (BCI) – microchips that can be implanted in the brain for cognitive enhancement. BCIs are being developed to improve the quality of life for people living with paralysis or severe motor impairment. Other potential benefits of BCIs include  increased overall intelligence, enhanced memory, and the implementation of complex computerized functions such as GPS or calculators. Essentially, human brains could develop into supercomputers. But we have to ask: who would have access to BCIs? What about individuals who choose to not use BCIs, or can’t afford them?  Despite their potential for good, technologies like BCIs also carry potential to further increase social disparities, and deepen already existing divides.  If only those with capital to access the technology are able to benefit from cognitive enhancements, we can imagine that the benefits would disproportionately help groups which have traditionally benefitted from an unfair advantage.

Equality movements have made society more inclusive of groups that have historically been marginalized because of age, gender, sexual orientation, or ability. There are more stakeholders at the discussion table, though we still have work to do to get everyone there. “We are all stakeholders,” says Dr. Ramakrishnan.

The “speed-dating” discussions echoed the imperative for the general public to be both well-informed and critical of science. One neuroscience student observed that a substantial  portion of the public denies scientific facts: the rise in prominence of anti-vaxxers, climate-change deniers, and flat-earth believers are all symptoms that allude to a growing ailment of scientific ignorance.

Cristian Zaelzer, neuroscience Ph.D. and the founder of Convergence Initiative, gave his account on the rising prominence of anti-science movements. He explained that the brain is constantly bombarded with different information, and the process used by the prefrontal cortex of the brain to sort through all this data is exhausting. Thus, the mind often resorts to using heuristics – mental shortcuts that constrict attention to one particular aspect of a complex situation to conserve mental stamina. Dr. Zaelzer argues that through this explanation, we can understand how, for example, anti-vaxxers might choose to disregard the benefits of vaccine and focus instead on the myth that vaccines cause autism. He also believes that this type of heuristic explains how, because measles is largely under control (ironically, through vaccination),  anti-vaxxers often  conclude that vaccines are no longer necessary.

Art as an Essential Bridge

How can art explain neuroethics? A vital benefit of art lies in its accessibility to the general public.

“A lecture like this is probably not the best way to reach a large audience,” Dr. Ramakrishnan admits jokingly, continuing, “a better way would be to have an interactive art project to attract people, and we could have a dialogue about it.”

Dr. Ramakrishnan presented an intriguing collection of interactive and visual works of art inspired by neuroscience and neuroethics. One noteworthy exhibit, “Mind Control,” effectively allowed one person to control another’s movements via a simple remote-control car device. The remote control was programmed to send signals into a pair of electrodes worn by a volunteer. The electrodes, when worn around the head, would then stimulate the vestibular system – the structure responsible for balance, causing the volunteer to lean left or right depending on the remote control command. If the volunteer is walking, the device could force them to walk in a direction of its choosing. A demonstration of this type of device can be seen here. People who encounter this exhibit are forced to reconcile the idea that mind-control, widely believed to be science fiction, is possible at some level. The exhibit immediately opens a discussion on the ethics of mind-control devices, and creates public awareness and inquiry into future developments of such neurotechnology.

Another thought-provoking exhibit, “Heirloom,” was created by artist Gina Czarnecki by carefully growing human cells on glass casts of a person’s face. The exhibit was created by culturing tissue samples of the artist’s daughters on glass casts of their faces. While the use of human tissue is heavily regulated in science, little consideration seems to have been made to their use in art. This exhibit raises questions about the ethical issues of using human tissue – in both science and art.

Bettina Forget, Ph.D. in art education, believes the importance of art lies in its ability to take otherwise unremarkable or confusing subjects and accentuate its significant features.  Art can dispel unproductive heuristics by creating compelling and interesting narratives to follow. Art can also act as a bridge for complex scientific topics, such as neuroethics, by capturing the interest and wonder of the general public.

The core message highlighted throughout the event was the importance of collaboration. Dr. Ramakrishnan emphasized the universal relevance of neuroethics and encouraged the use of art as a vehicle to carry out its understanding. The speed-dating discussions provided further proof: guests from a plethora of different backgrounds, whether experts or laypersons, came together to bring forth their unique perspectives on current  issues in neuroethics. Bridging various identities and disciplines, the event facilitated new connections to foster deep and critical understandings of neuroscience and a public awareness of neuroethics.

This seminar was the culmination of the tremendous efforts between Convergence Initiative, in partnership with the Brain Repair and Integrative Neuroscience Program (BRaIN) of McGill, the Faculty of Fine Arts of Concordia (FoFa), McGill Integrated Program in Neurosciences (IPN), and the Canadian Association for Neuroscience (CAN/CAN).