Not “Politics as Usual” 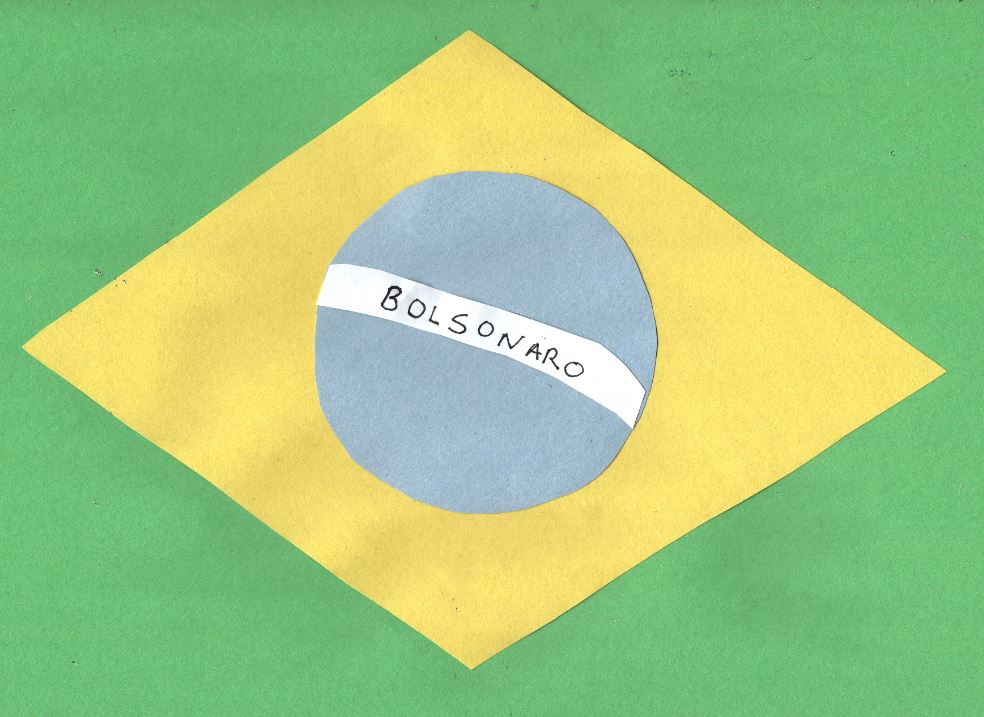 Brazil held their first round of elections, for president and Congress, on October 7. While a number of congresspeople were elected, including Joênia Wapixana, Brazil’s first female Indigenous representative, no presidential candidate received 50 per cent or more of the vote. A runoff election was held on October 28. The two contenders for the presidency were the far-right Jair Bolsonaro and the Workers’ Party’s (PT) Fernando Haddad, with Bolsonaro eventually winning the election. In the October 7 election, Bolsonaro received 46 per cent of the vote, and Haddad 21. Bolsonaro has been the subject of domestic and international unease for his reputation as racist, misogynistic, and militarist. Some publications have compared him to the U.S. president, dubbing him “the Trump of the Tropics.” His popularity sparked a hashtag, EleNão (“not him”). Despite protests and an increase in political violence, current polls still show that Bolsonaro will almost definitely be the next president of Brazil. Manuel Balán, an assistant professor in the Institute for the Study of International Development, spoke with the Daily about Brazilian politics, why Bolsonaro will be elected, and what this means for the country.

The McGill Daily (MD): What is Brazil’s electoral system like?

Manuel Balán (MB): Brazil has a presidential system, meaning that the executive is concentrated into one non-legislator called the president. Brazil has one of the most restrictive two-round systems in the region. Even though the difference between the candidates was substantive in the first round, we are still holding a runoff election. In Argentina, where there’s also a two-round system, if there’s a ten per cent difference between the first and the second candidate in the first round, the first candidate is elected. According to the rules elsewhere in the region, Bolsonaro would already have been elected. The other thing that is important to know is that part of the congressional elections are concurrent with the presidential election; they all happen at the same time during the first round. This leads to what we usually call coattail effects. The candidates that receive votes in a presidential election are able to bring with them a number of legislators. In the context of this particular election this means that even if a huge upset takes place this Sunday and Bolsonaro loses this election, he’s already managed to greatly empower his coalition of legislators in Congress. Not to the same degree that he got almost 47 per cent of the vote, but still significant enough gains at the congressional level that will, if elected president, allow him to more easily create coalitions in government. But also, if by any luck of the draw there is an upset [and Bolsonaro is not elected], his supporters will still control Congress quite cohesively and it would be difficult for any non Bolsonaro president to actually get anything passed. Bolsonaro has better odds in creating a coalition that will get legislation passed, but I don’t mean this in a good way.

MD: Where is Bolsonaro’s popularity coming from?

MB: I think Bolsonaro’s popularity comes from a couple of different sources. The main characteristic of Bolsonaro that brings him popularity isn’t what gets all this media attention. It’s not his racism or misogyny that’s getting him votes, it’s his “anti system” attitude. All the well-established parties in Brazil that have received most of the presidential votes in past elections did very poorly in this election. The PT lost a lot of votes, but if you look at the former opposition party they also did super horribly this election. If you look at the person who was the third place candidate in the last election, Marina Silva, she went from 20 per cent of the vote to one per cent. Everything sort of in the middle of the spectrum, centre left or centre right, basically anything that wasn’t extreme [Balán notes that he doesn’t find the PT extreme] lost its votes, and they lost most of those votes to Bolsonaro. So this can be seen as an anti-system type of attitude by voters that are frustrated with a number of different things but two big ones. One is an economy that is in recession and has been struggling for years now, and the second is related, to some extent, to all the corruption scandals that we’ve seen. And these corruption scandals have taken place during a PT government (but do not address only the PT). If you look at the prior composition of Congress almost all Congress members are being prosecuted or indicted for corruption charges. They are all involved in this. So a rejection towards politics as usual, plus an economy on the downturn, means people start looking for strongman figures. We’ve seen this elsewhere, where this larger-thanlife, maybe quasi-authoritarian figure, who is not “politics as usual” rises in popularity. This in a way explains one chunk of the vote. I think another part that cannot be forgotten is that the PT have been in government for 12 years. Their government, even with a lot of mistakes, empowered a lot of minorities, they helped a lot of lower classes, they brought a bunch of people out of poverty. Again with lots of mistakes, but they did do this. So there is an anti-PT sentiment in Brazil that is very strong. Just as we saw the #EleNão movement, we also saw the PTnão (anyone but the PT) movement. So people felt if Bolsonaro was the guy that is going to beat the PT, then so be it. This was a very antisystem and a very anti-PT vote.

MD: Was this election, then, more about sending a message than about electing a government people like?

MB: To some extent, yes. To another extent, it is about electing a powerful figure, someone who seems to be a strongman. Bolsonaro certainly fits that bill. This can be debated, but I don’t think that because this guy is a racist, misogynist, militaristic guy, that those sentiments are necessarily on the increase in Brazil. I think these sentiments have always been in Brazil. There’s a big part of society that resonates with these types of claims, not 47 per cent, but a big part. These sentiments are alive and well, but I don’t think that’s what people are choosing him for. But I think it’s not a minor factor, either. This guy has been in politics for a long time, and he was someone who was not taken seriously by the PT or by anybody. What explains why he is starting to be taken seriously is that he is receiving support and being taken seriously by the strong economic powers in the country. So this gives him credibility. Also, for years now we have seen the rise of evangelism as a very powerful societal force, and as a very powerful political force. There’s an evangelical part of Congress and Bolsonaro is very much associated with them, and a part of the evangelical movement in this election. This also helps explain the rise of Bolsonaro.

MD: Is the comparison of Trump and Bolsonaro, like we’ve seen in the media, valid?

MB: I think there are some similarities. These are very different countries and Bolsonaro and Trump are very different themselves. But I think there are some points of connection. Trump is a businessman; Bolsonaro is military. This is a significant difference in terms of their background. I do think that Brazil, and the forces at play in Brazil and in the U.S., are significantly different in many ways. But, yeah he is generally is compared to Trump. I think he is, in my personal view, much scarier than Trump – and I’m scared by Trump. He is much scarier than Trump in many ways. We can also draw comparisons with other current figures like Orban, or in terms of the processes that are behind his rise to power, there are some parallels as what happened in Italy in the 90s, and how the prosecuting of corruption generates a void in the political sphere and how out of this void another sort of “larger than life figure” [Silvio Berlusconi] emerges, that was terrible for corruption in Italy actually. So in drawing that parallel, I think Bolsonaro will be elected, and he will be terrible for corruption in Brazil. This is not the fix for corruption, its making things worse. So yeah I think Trump is a valid comparison. I think Orban is a valid comparison. I think Berlusconi is a valid comparison.

MD: What policies do you see coming from Bolsonaro’s election?

MB: There are a couple of different things here. For all his racism, misogyny, classism, etc. I think those are things that he may not explicitly change policy about. I don’t think that he will be a classic authoritarian military guy that will take over power and close Congress. I don’t think this is the type of scenario we should envision going forward. That doesn’t mean [that his election] isn’t a grim picture. I think the grim picture encompases two things. One is that any sort of environmental protection is gone out the window, along with any sort of protection of Indigenous rights. Because environmental protection is out the window, this means complete and utter free range for exploitation of the Amazon. It wasn’t that the PT was great about environmental policy, but this is going to be a free for all. Here [the environment] is where he is going to move quite quickly. This is in part what explains the level of support that he gets from business. These are mining companies these, are natural resource companies; this is why The Wall Street Journal published an editorial in favour of Bolsonaro, saying that he is the right choice for Brazil. I think what lies behind this is business interests and lack of regulation to exploit natural resources. This is very scary to me. And this is where I think we will see policy changing. Now the other part: the racism, the misogyny, etc. I don’t think there will be changes in policy, but I do think electing a guy who says these things, as we saw in the U.S., brings certain free range for people in their daily lives to exert these kinds of discourses. And we already are seeing this. So I think actual conditions on the ground in Brazil when it comes to minorities, women, other disempowered people, are going to get significantly worse. There’s a difference between policy and what happens, but I think what happens is its going to get significantly worse. If this guy says this then why aren’t we doing what he says. [The support of Bolsonaro] validates a very misogynistic, a very racist, a very classist type of attitude towards people. One place where we may see some changes, one of the groups that is the most disadvantaged in Brazil are domestic workers, and they were completely unregulated up until recently. They worked terrible hours for terrible wages. This was changed, and now they’re regulated. The conditions still aren’t great, but there is some improvement. Everybody [in Congress] voted in favour of this except for one person. And he has made it a point of his campaign to advertise that he was the one guy that opposed domestic worker protections. Guess who that is? Bolsonaro.

This interview has been edited for clarity and length