A short story from our new literary column “Isthmus” 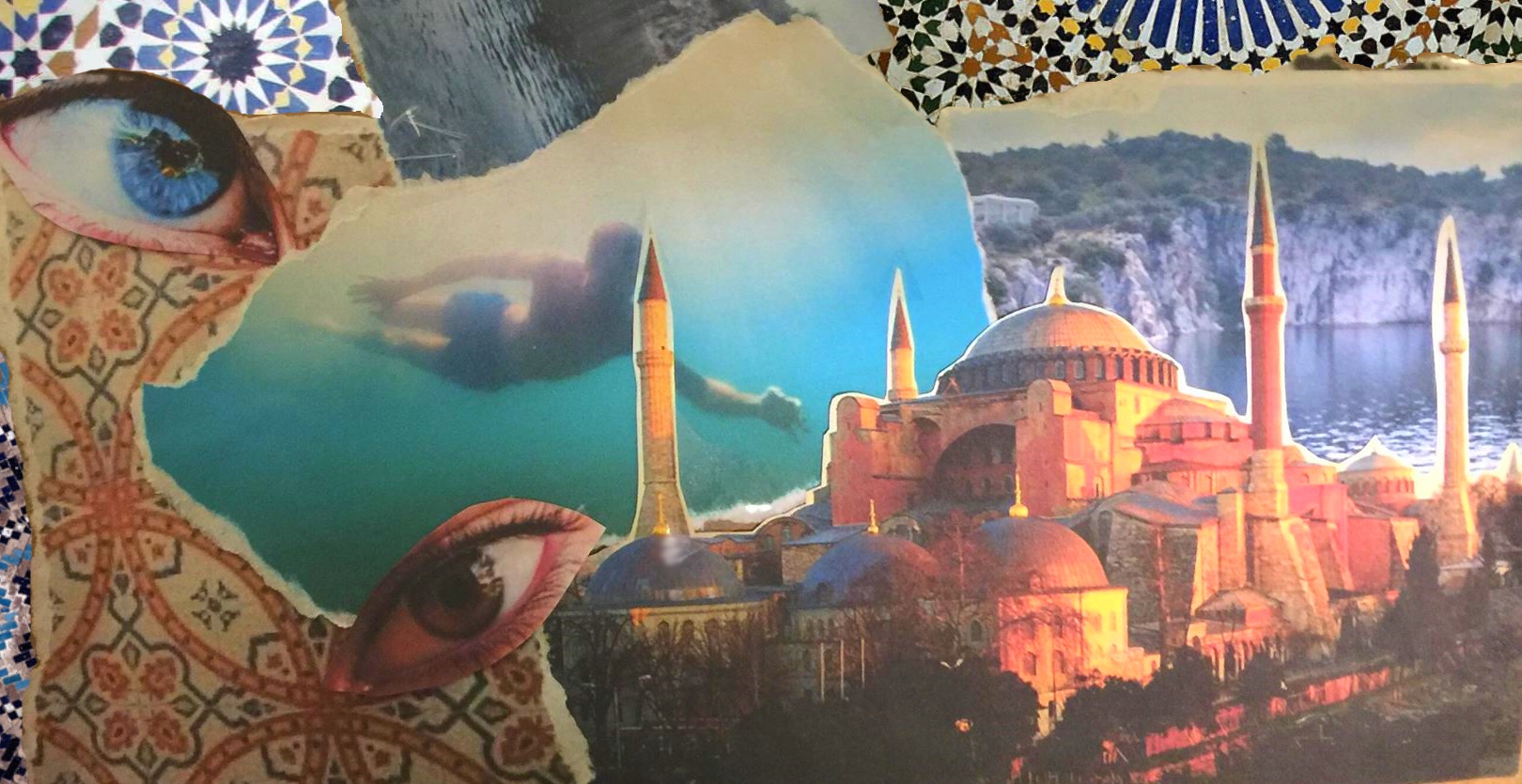 Baba told me we came from the Caspian Sea. I walked past a man who smelled like Baba (Turkish for father) at the corner of Saint Laurent and rue Rachel. Large puddles from the early afternoon showers were growing to my right. I followed them down the street. A woman rode in the bike lane, her red dress and baby blue heels dancing with the yellow of the Montreal night.

Scanning the menu, I remembered the times my ex would order for the both of us.

“What are you doing, you idiot!” Jenny said on the phone. She called me when she realized I walked past my date and the bar. “Turn around!”
I had broken up with my first serious boyfriend two days before. I downloaded Tinder on my mother’s recommendation, and a couple hours later my roommate had scheduled a date with Gim, a man I had met in my first year at McGill.

We introduced ourselves over drinks. “A dry martini,” he said. I hesitated. Scanning the menu, I remembered the times my ex would order for the both of us. The waitress shared our uneasiness – it looked as if it was her first night on the job, her white button-down shirt fit awkwardly on her body, as new shirts sometimes do.

“So, you’re from the Netherlands?” I asked.
“Just north of Amsterdam, in Alkmaar.” Gim’s voice was quiet but strong in its Dutch accent. He went on to tell me about his life and desires, professing his love for South American politics and confessing that he wants to be like his uncle. After graduating in America, he had moved to rural Brazil and never returned. At the end, he missed his mother’s funeral and the first steps of his little nephew. Then Gim moved on: he spoke of adopting a Quebecois accent in French. He spoke of working on a Concordia executive student board. He spoke of the South Atlantic Ocean.

Gim asked for the bill. He reminded me of a lion I had seen in a documentary. He seemed so far away, even though we were in the same room. “Let me take you to another bar,” he said. He had a large mouth and thin lips. I only saw white teeth when he smiled. “I used to live in this area.”
We left, and although I had spent the night as a passive listener, I was the one to hand my credit card to the waitress.

Metal letters printed on the wood frame of the next bar spelled, Dieux du Ciel. “Fancy name,” I said, passing Gim as he held open the door. The waitress greeted him by his name and he ordered beers in response.
This time, we spoke across a small wooden table. The atmosphere here was different: the uneasiness had passed, as the drinks at the first bar had made us closer. Now, we talked to one another in a mild demeanor. It reminded me of running into an old friend.

My racial identity became the topic of conversation when Gim asked what my name meant, or if there was any meaning to it at all. I wondered what would happen if I had asked him the same. I knew that I was not expected to. I knew I don’t get to ask the questions that blue-eyed boys do.

Gim led the conversation once again, telling me about his strained relationship with his mother, and his ties to the rural parts of the Netherlands. “I had a couple Turkish friends in middle school,” he said, his pint half empty, the blackboard with the beer specials of the day written in chalk above him.
“Very cool.”
“Yeah, there was this one kid I was really good friends with,” he leaned back in his chair, his long legs brushing against mine. Gim wore a black shirt and black denim pants, his hair golden in the darkness. “Yea, I went over to his house once, and it was actually so funny, because, you know Turkish people, they all live in the same house: the mother, the father, the grandmother, the great grandmother, and all eighteen siblings and cousins. It was hilarious!”
“Haha,” I responded. “You’re right.” There were times to fight, and others to let things roll over, like ocean waves crashing down on a body that lay in the sand on a summer day. I had learned when to correct men who thought they knew my ethnicity and culture and when to stay quiet. I knew that finding new love was not going to be easy.
“Yea, I even picked up some Turkish words like…”

I thought of my Baba. When he flew from Istanbul to Los Angeles thirty years ago, would he have imagined his son washing his hands as a little boy, convinced that soap was the only thing that distinguished his skin from the complexion of his white friend.
“‘Cay’, right” he looked at me, waiting for validation. His eyes were playful. His eyes were dangerous.
“Yep,” I said. “Tea.”
“And, uh,” he paused, “What’s the word for yes?”
“Evet?”
“Yes, haha,” Gim said, “Evet, oh my god, haha.”

My racial identity became the topic of conversation when Gim asked what my name meant, or if there was any meaning to it at all. I wondered what would happen if I had asked him the same. I knew that I was not expected to. I knew I don’t get to ask the questions that blue-eyed boys do.
We left the bar, and Gim walked me home. Going down Saint Dominique, he pointed to his old apartment. “I used to live there, you see the one with the green door?”

We had been in Montreal the same amount of time, but Gim seemed more confident here. He had found his place on these cement roads and fountain-centred parks.
We sat on a circular staircase on Aylmer, where I lived. We split cigarettes and made small talk about the warm weather. Gim told me of the time that he went to LA, about how he stayed near the beach in Santa Monica, and how he was never ID’d at clubs despite being eighteen. “That’s just my white privilege, I know,” he said, as if anticipating my response to his story. He said the words “white privilege” so loosely, as if they came to his mouth like water from a hose.

He asked me about the last time I was in a relationship. When met with silence, the clouds spoke loudly over us. We talked about our evening, and when I asked him to spend the night, he responded, “No, if I wanted to, I would have told you. I always get what I want.” He delivered the message with purpose. He seemed to have confidence in himself. I wondered what other things blue-eyed boys had that I don’t. The Montreal heat stuck to my body.

I remembered Baba telling me not to fight a current. I let the world carry me out, and I watched the shore fall behind me. I was alone in the sea. Breathing.

Gim stood on the stairwell looking at his watch, then he left me at my door, and kissed me. “I’ll text you,” he said, walking down the stairs of the apartment building. His accent seemed changed; his voice had become more direct and pointed, as if he was saying, “I’ll get you the money next week.”
“See you!” I responded, my mouth jumping at the occasion. I hadn’t noticed that I had been silent for so long.
Stop overthinking, the voice of my ex echoed in my head. I remembered a fight we had in Parc LaFontaine. I had pointed at the Swedish-branded pillows in a display case, wondering why he did not share my anger that they were appropriated from traditional Turkish patterns.
Baba told me I came from the sea. I knew how to swim in blue-eyed water. I remembered Baba telling me not to fight a current. I let the world carry me out, and I watched the shore fall behind me. I was alone in the sea. Breathing.