An Ode to SSMU Babies

These Adorable Gremlins are Making Everything Okay 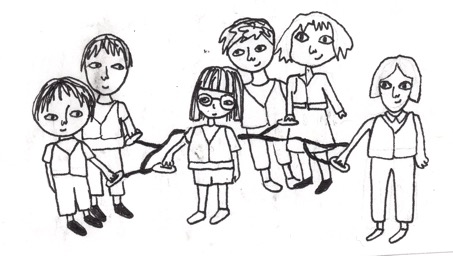 Despite the heat, and the no smoking signs, students chainsmoke cigarettes, slumped over in whatever shade they can find, still not entirely thrilled that the school year is back in swing. They have collectively decided to stop trying to hide the gallons of sweat leaking out of their exhausted, suffering bodies. It is week number two, and classes are being skipped in favour of day-drinking at OAP.

It is summer in Hell, and everything is going to be okay.

From across the patchy field come peals of laughter. Full of mirth. Full of joy. Full of innocence. The SSMU babies are being promenaded across campus, clad in matching red vests straight off the runways of New York Fashion Week. While university students politely make plans to “get coffee sometime!” with people they haven’t seen since first year, the SSMU babies are living their truths. They’re not planning coffee dates with fake people. They don’t drink coffee. They’re all real friends. I saw an adorable miniscule girl ask an adorable miniscule boy if he would be her best friend. They were both wearing striped shirts. He excitedly told her yes, and started talking to someone else. She was not bothered in the slightest by his inattentiveness. She smiled to herself. I witnessed that blessed interaction with my very own eyes.

I envy the SSMU babies, I won’t lie to you, I envy the SSMU babies, I do! I envy the fact that they aren’t constantly sweaty. I saw multiple tiny cardigans. Cardigans! In early September! I like knowing that when one child bites another, there is a now a feud between their professor parents. I envy the fact that they aren’t left to their own devices, eating ice cream sandwiches for dinner. As an adult, I am allowed to do that. I have been doing that. I should stop, for my own sake. But I can’t force myself without the threat of outside consequences. Those tiny babies probably only eat nutritious organic food. Damn them.

Most of all, I envy that they have no responsibilities. They don’t have jobs. They don’t have classes to attend. There is no one relying on them. Well, no, that’s not true. I rely on them. I rely on them to remind me that youth is fleeting. Make the most of it, those children remind me. Skip my dad’s class. He’s boring. Spend your time making new friends and picking your nose.

That’s the point of SSMU babies. They exist to make summer more bearable and to remind us to go outside and pick our noses in the sunshine.