Amendment to the Amendment 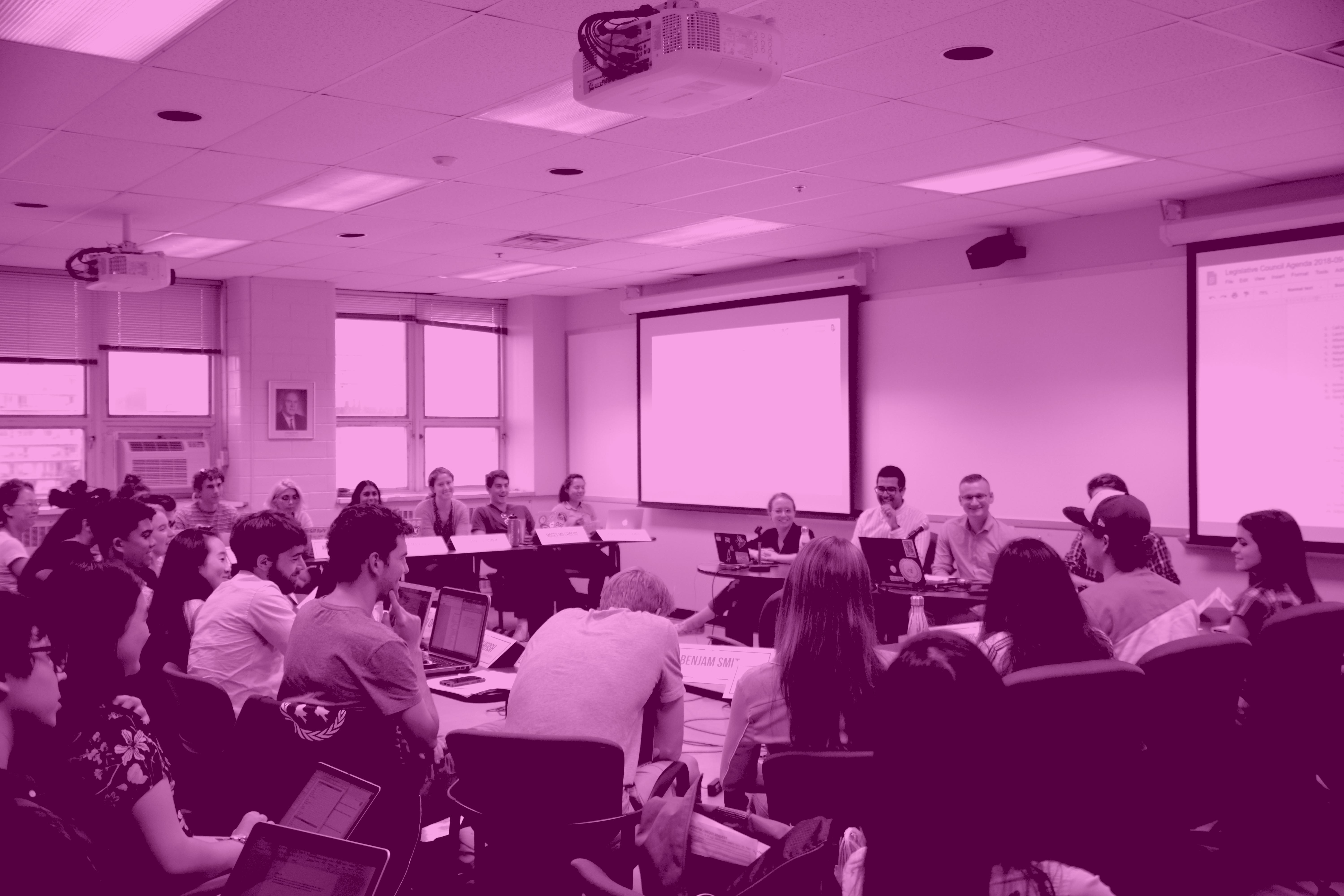 On September 13, the executives and representatives of Students’ Society of McGill University (SSMU) met for their first meeting this academic year. The meeting featured 2 guest speakers, Elections SSMU and the SSMU Gender Neutral Language researcher. A motion regarding the inclusion of both the Canadian Charter on Rights and Freedoms and the Quebec Charter in the Standing Rules for the year was passed, and a policy regarding the VIP privileges of the VP Internal during events was debated.

Guest Speakers
In their presentation, representatives from Elections SSMU outlined their new elections timeline and goals for this year. They pointed out that during the 2018 Winter referendum, more people voted in just the questions portion than for SSMU executive positions. 1,500 people voted in the referendum, and 1,200 of those voted only on the question proposing a fall reading week. Longer nomination periods for elections are now in place, with hopes to open the internal regulations to also lengthen the extended nomination period. Elections SSMU also expressed desire to encourage more students to run for executive positions as most were uncontested. A motion to accept the proposed timeline was put forward later in the meeting and subsequently passed. Last February, SSMU passed a motion to de-gender their language; the Gender Language researcher position was set up and awarded a contract of 35 hours. At this meeting, the SSMU Gender Language Researcher presented some of their findings and recommendations, a few of which had already been implemented. First, the researcher spoke about their plans to address misgendering at council. They worked with Husayn Jamal, SSMU’s stand-in parliamentarian, to redraft Robert’s Rules, a manual used for parliamentary procedures, to accommodate instances of misgendering. “Councillors must address each other formally, usually in the form of councillor last name, and avoid referring to one another using third person pronouns to promote a cordial environment. Should the speaker notice the misgendering of another councillor, they should call this to the attention of the council in the form ‘before we continue with debate I would like to call attention to the pronouns specified on councillor last name’s placard.’ Should any councillor notice the misgendering of another councillor they should call this to the attention of the speaker on a point of personal privilege,” the researcher explained. While councillor placards already had gender pronouns on them, there were concerns of legibility. In order to address this concern, the Researcher implemented a colour-coded system for placards: green for councillors identifying as she/her, burgundy for those identifying as he/him, and black for those who go by them/them pronouns. While the researcher pointed out that these are not an exhaustive list of pronouns, they are the most common, and more pronouns and colours may be added as needed. This practice is now standard, unless a councillor requests otherwise, and a councillor may change their pronouns at anytime.

VIP Culture at SSMU Events
VP Internal Affairs, Matthew McLaughlin, proposed a policy to deal with the history of power abuses by the VP Internal regarding alcohol consumption. McLaughlin pointed to the commonality of having bottle service for both the VP Internal and the Student Society Programming Network (SSPN), a move which often resulted in members from both organizations being severely intoxicated and unable to perform their duties. The policy stated that no SSMU funds should be used for alcoholic purchases for the executive, and that the executive shall not become intoxicated at events, in order to maintain an optimal mental and physical state. The sentiment of the policy was applauded, but it’s wording was criticized as vague and there were concerns over an absence of any punitive measures if the VP Internal or SSPN members were to become intoxicated at their events. An amendment put forward by councillor Sanchez to change the title to Policy on VP Internal Intoxication and VIP Culture at SSMU event passed, but the motion itself was set aside in order to discuss further motions. Arts Councillor Andrew Figueiredo, Senator Buraga, and VP McLaughlin left to attempted to implement the recommended changes. After councillors were assigned to their committees for the year, the policy was again put forward. However the solution reached by the caucusing parties, that “any accusation that the VP Internal became intoxicated to the point of that they were incapable of performing their duties […] be brought to the legislative council for a discussion and vote on possible disciplinary measures,” was still deemed insufficient. Councillor Sanchez motioned for the policy to be debated at the next council on September 27; the motion carried.

The meeting closed with reports from SSMU executives detailing their accomplishments over the summer. All reports have since been made publicly available on SSMU’s website.