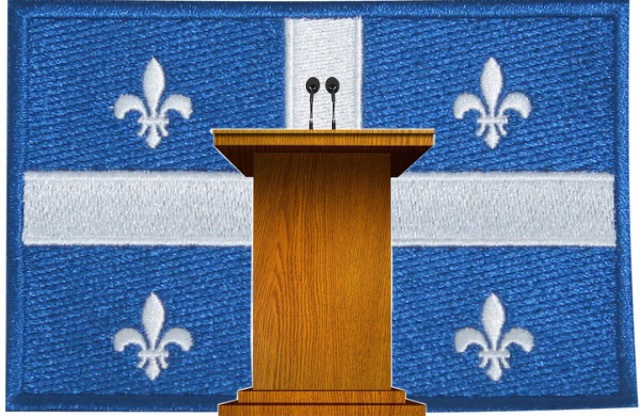 Elections SSMU organized a debate (held on September 19) with local candidates in anticipation of the upcoming Quebec elections on October 1. The debate included candidates for the Westmount Saint Louis MNA position from all seven Quebec parties, each hoping to gain support from McGill voters.

While all seven candidates agreed that Quebec’s $12/hour minimum wage is insufficient, Liberal candidate Jennifer Maccarone, Coalition a l`Avenir Quebec (CAQ) candidate Michelle Morin, and Conservative Mikey Lauzon were advocating no increase in minimum wage. Instead, these candidates believed that the benefits of balancing the budget, the dangers this might pose for small businesses, and the relative merit of cutting taxes, were more important than raising minimum wage, respectively. On the other hand, candidates from the Parti Quebecois (PQ), CAQ, Quebec Solidaire (QS), Green Party, and NDP all advocated raising the minimum wage to $15/hour as a way of providing a living wage and stimulating the economy. These candidates also acknowledged the importance of supporting small businesses through this process. The NDP’s Nicholas Lawson went even further with his promise for a guaranteed minimum income of $1000/month.

Liberal Maccarone and CAQ Morin advocated a dental care system of guaranteed free coverage for all those under 18 and for seniors, while both the Green Party’s Samuel Kuhn and NDP Lawson argued for universal dental care, and QS Ekaterina Piskunova cited her party’s plan for 60-80% dental coverage reimbursement for all adults, and free care for all children and seniors. However, neither the PQ’s J. Marion Benoit nor Conservative Lauzon had a direct response to the question of increasing dental coverage. Instead, Lauzon argued for more privatization of health care and more private insurance to increase competition in the market.

On increasing youth participation many candidates offered non-specific responses when asked how they would increase democratic participation by young people, and how they would best represent young voters. However, Maccarone and Lawson indicated that they would investigate the viability of online voting to make it more accessible, Kuhn and Lawson advocated instituting proportional representation, and Kuhn argued for lowering the voting age to 16.

When asked about the recent deregulation of tuition for international university students coming to Quebec, all candidates except for Maccarone and Lawson were opposed, citing the importance of inclusivity and the right to affordable education. Maccarone argued instead that universities should ultimately be the ones to make decisions about their tuitions. Lauzon insisted that all university tuitions should be deregulated in order to give more power to universities to adjust tuition to increase their market competitiveness. On the other hand, Morin, Piskunova, and Lawson all stressed their belief that education should be free and accessible to all Quebecers.

Each candidate responded to a question on federalism by assuring that they would always vote to remain within Canada, except for PQ candidate Benoit and QS candidate Piskunova. Benoit said that Quebec independence would allow the province more independence, arguing that federalism doesn’t work within the Quebec context, and Piskunova presented her sovereigntist position as an opportunity or tool to be able to make more independent and socially just decisions, such as writing a new Quebec constitution more focused on minority rights.

The candidates were divided in their views on the role of multiculturalism and immigration . Maccarone, Benoit, and Lauzon stressed the need to accept immigrants into Quebec in order to address the growing labor shortage. Lauzon insisted that the most important criterion for immigration should be not what language an immigrant speaks, or indeed any other factor besides what economic benefit they will bring. Benoit stressed that 100 per cent of immigrants should speak French before being allowed to come to Quebec. Additionally, both Morin and Lawson also acknowledged the importance of being able to speak French in order to integrate into the province, but believe that providing free French classes to immigrants once they arrived would be beneficial. Piskunova, Kuhn, and Lawson agreed on the importance of welcoming immigrants and working with them to ensure successful integration once they arrive. A related question arose pertaining to the candidates’ opinion on Bill 62, which regulates who can wear religious symbols and garments, and where they can wear them, which many see as a controversial infringement upon religious freedoms (for example, civil servants are prohibited from wearing religious garments, as are people using public transportation). All candidates except for Maccarone and Lauzon opposed this Bill, saying that it is too subjective or inefficient, and needs revision. Maccarone and Lauzon, however, stressed the need for those representing the secular state to remain neutral.

To a certain extent, each candidate pledged support for environmental causes. Lauzon’s proposal was for the creation of more pipelines as a more environmentally conscious way of transporting oil, and for the abolition of the carbon tax. Lawson, opposed pipelines and fossil fuel extraction, as did Piskunova. The Green Party’s Kuhn had little to present by way of environmental initiatives, while Lawson, Morin, and Maccarone supported the electrification of transportation, and Benoit proposed increasing urban agriculture.

There were similarities between Maccarone, Morin, and Lauzon in their repeated emphasis on economic policy over social policy, often in defense of present systems. For example, Maccarone defended the Liberal government’s austerity measures that affected McGill directly, weakening areas like its disability services and other social services, saying that balancing the Quebec budget must be accomplished. Similarly, Morin repeatedly stressed her focus of building a strong economy, and Lauzon presented himself as a candidate on the side of the customer, interested in lowering taxes and doing away with the Quebec Sales Tax. In contrast, Piskunova advocated long-term social and environmental change in the status quo, while Lawson characterized himself as both “idealistic and realistic,” interested in non-divisive change. Benoit’s focus often fell most strongly on issues of sovereignty and francization, while Kuhn’s main interest lay in the failure of the Quebec healthcare system under Liberal austerity measures.