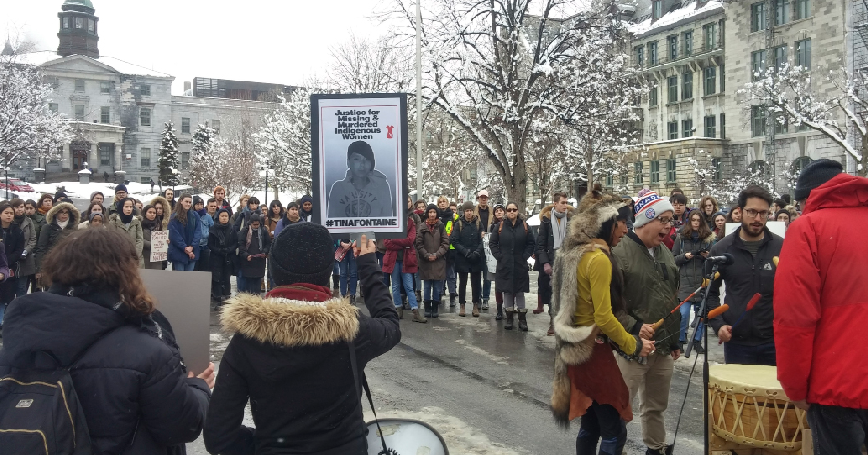 On March 14, the Indigenous Student Alliance (ISA) held a demonstration at the Y-intersection on the downtown campus to protest the ongoing injustices against Indigenous peoples in Canada. The demonstration was organized in the wake of the acquittals of Gerald Stanley and Raymond Cormier, who murdered Colten Boushie, 22, and Tina Fontaine, 15, respectively. Brady Francis, 22, was also recently killed in a hit-and-run. The event was inspired by similar walkouts which took place at the University of Victoria and the University of Toronto. Indigenous speakers were invited to share their perspectives on the Canadian government’s failures against Indigenous people. The speakers also encouraged Indigenous students and allies to take action. Speeches were followed by drum performances by the Buffalo Hat Singers, a group based in Montreal, and the Medicine Bear Singers, an Indigenous group from McGill.

Carlee Kawinehta Loft, the Indigenous Affairs Commissioner at SSMU, spoke first. She started off by reading the land acknowledgment, then pointed to the fact that recent cases are not unique, and that injustices against Indigenous people are a nationwide problem.

“The injustices they faced happened far from here, in territories you maybe haven’t even been to, but remember that injustices and colonial violence happen here too, in this territory, here on the unceded, stolen land of the Kanien’kehá:ka.”

Loft explained how Canadian institutions are responsible for perpetuating these injustices on a national and local scale. “These injustices occur due to the nation-wide implementation of various Canadian systems which systematically devalue Indigenous lives,” she explained. “These [systems] include the child welfare system, the so-called justice system, the educational system, and many others.”

At the end of her introductory speech, Loft expanded on the responsibility of university students to use their educational privilege to learn and care about Indigenous issues, in order to enact change. More than just a commemorative event, the demonstration aimed to encourage allies (i.e. non-Indigenous folks who wish to support) to take action.

“I’m happy you came today but remember that your action doesn’t stop here. It doesn’t stop today and there are many ways that you can reach out. You go and become involved with different activist organizations, you can look into where to to donate.”

This point was emphasized by the next speaker, Nakuset, who is the executive director of the Native Women’s Shelter in Montreal. “Look into the organizations that are doing the work, either join them, model them, use them as role models and help us, because when you all came to this land, we helped you, and we would like it if you returned the favor.”

She highlighted the resilience of Indigenous people, who, against all odds, are still alive today, and are pushing for their rights to be respected. “After all the things that the government has done to us we should all be dead, but we’re still here, and we are just trying to have a fighting chance.”

Nakuset is a survivor of the Sixties Scoop, a state-sanctioned assimilation process which took place during the 1960s, and which saw Indigenous children being taken from their families to be placed in foster homes or put up for adoption.

“Most of us were brought up to be ashamed of our cultures,” she explained. “I ended up getting my education right. By working at the Native Women’s Shelter, I create projects to help Indigenous women, because we see here in Montreal that there is a lack of services for Indigenous people, and there is injustice on so many levels.”

Referring to the Brady Francis’s case, for which no one has been arrested yet, and which further exemplifies injustices in the Canadian legal system, she stated: “Our people keep dying and […] no one is held accountable. And this is today so what is going to happen tomorrow? What are we going to do as a community to make sure that things change?”

Talia, a student at Concordia University, spoke next, sharing her lived experience and personal history. She recited a poem, which can be found in The Daily’s commentary section this week.

“I grew up exactly like Colten, Tina, and Brady, in poverty, in foster care with drunk, young parents who constantly fought in front of us. I have a lot of those memories, that I am not trying to forget, but that I’m trying to let go, as I try not to let them direct my path.”

Originally from Saskatchewan, she highlighted the importance of being aware that even if Indigenous racism and prejudice may not be as visible in Montreal, “they’re very fucking real out in the prairies. I remember being in grade [school] and realizing that no matter what I did with my life, they would see nothing more than my brown skin, and not even consider me human.”

The Fight is Happening

Ben Geboe, the executive director of the American Indian Community House in New York City, put forth some numbers, and further highlighted the resilience of the Indigenous community and the necessity of taking action. “Right now there are 95 cases against the Canadian crown for the rivers, the mountains, the lakes. It’s not an ideological or passive battle, it is actually happening. We are languishing, but yet we are surviving with the help of great activism.”

Denzel, one of the drummers, expressed his thoughts on the event and on allyship. “I am happy with the turnout, happy to see how many people came out to support us. It’s important to have appeal from all and to have them join us because we all need to call for justice for Indigenous people, not just [from] Indigenous people.”

Similarly, Talia claimed that “non-Indigenous and every minority in Canada needs to learn the history, and fight with us.” She finished her speech by recounting a prophecy an elder told her.