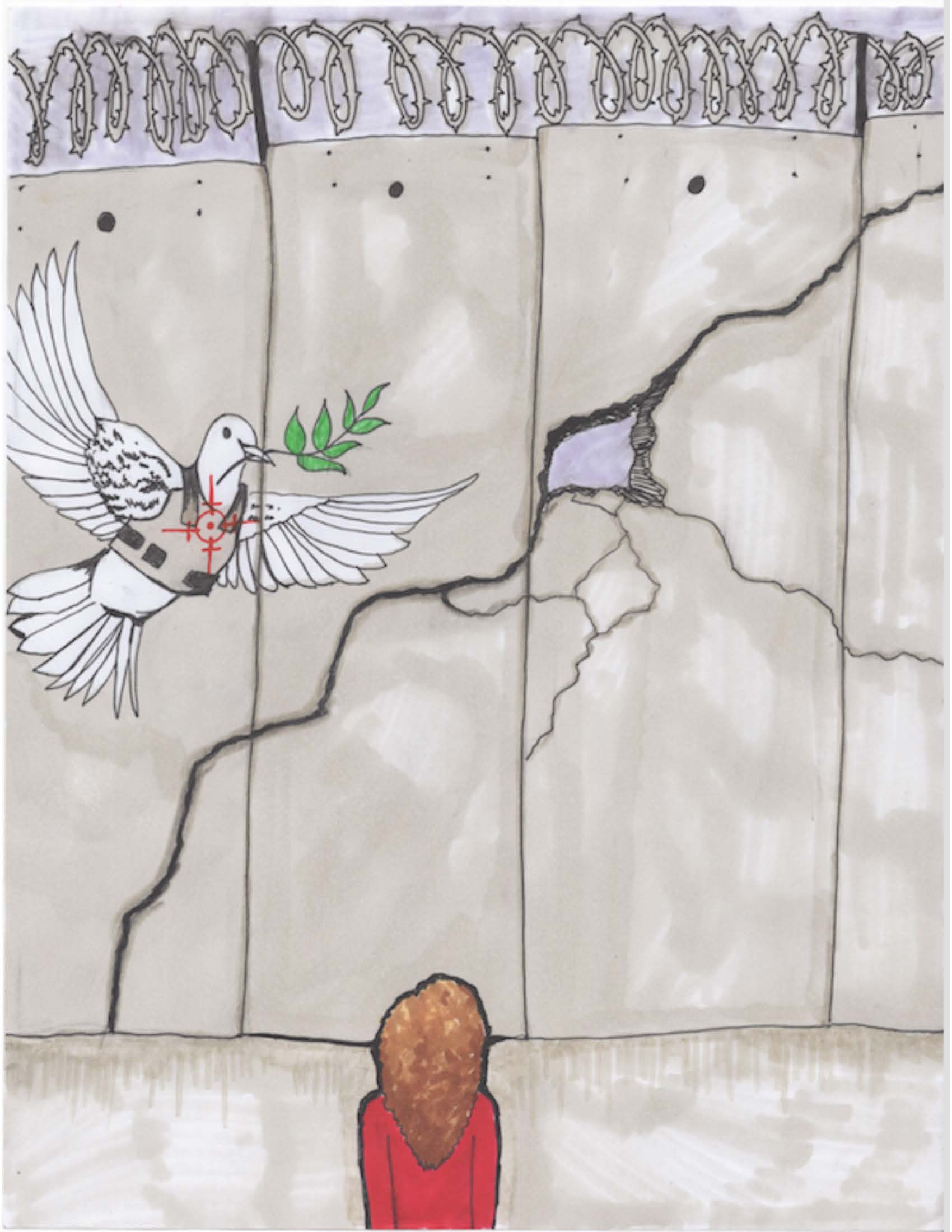 On Sunday, February 18, around 50 people gathered to protest against the trial of Ahed Tamimi and the treatment of other Palestinian political prisoners at Norman Bethune Square. The rally was organized by Solidarité pour les droits humains des Palestiniennes et Palestiniens in coalition with five other groups as part of Free the Tamimis Global Day of Action, an international campaign organized in response to the arrest and detainment of the 17-year-old activist, Ahed Tamimi. The ongoing imprisonment of the Tamimi family has sparked public outrage, in response to the military court’s ruling last month to keep Tamimi and her mother in custody during closed-door trials.They, allegedly, do not have a clear timeline. Various speakers at the event denounced the prosecution of child prisoners, as participants held banners reading “End apartheid,” and “Stand with Gaza.” Two police vehicles were present at the rally.

“Israel does not differentiate between the child, the elderly, the women,” said Omar Ben Ali, a speaker and Palestinian refugee participating in the event. “In the eyes of the Israeli occupation, every Palestinian is an enemy. Every Palestinian must be punished.”

Ben Ali, who is from the Jenin region of the Israeli-occupied West Bank, is currently stateless because of the Canadian government’s refusal to recognize his claimed refugee status.

Ben Ali emphasized that the Ahed Tamimi case is not an isolated incident, as all Palestinians under occupation, including his wife and children in Palestine, are at risk of violence.

According to the Palestinian Prisoner Solidarity Network, approximately 700 children are put on trial in military courts each year. Recent cases include the detainment of Abdel-Raouf al-Bilawi and Razan Abu Sal, two 13-year-olds, who were sentenced to four months in prison in January this year for throwing stones at occupation forces. They are reportedly the youngest Palestinian prisoners to date, and the youngest prisoners in the world.

Both al-Bilawi and Abu Sal live in the occupied West Bank, like the Tamimi family members, where Human Rights Watch have documented multiple cases of the Israeli Defense Forces (IDF) being physically abusive, and where the Tel Aviv based Haaretz has reported on allegations of IDF officers purposefully disabling Palestinian youth.

According to the prisoners rights group Addameer, there are currently 350 Palestinian children in Israeli detention. According to a study published on October 2017 by Israeli rights groups HaMoked and B’tselem, the Israel Prison Service (IPS) incarcerates Palestinian youth under harsh conditions, such as night interrogations without the presence of a guardian or a legal counsellor. The report states that 91 per cent of interviewed minors were arrested at night, and minors were not made aware of their right to remain silent, or their rights to counsel. Such detainment is unlawful: Israeli law prohibits night interrogations.

Moreover, Israel, as a signatory of the UN Convention on the Rights of the Child in 1991, is obliged to uphold international juvenile justice standards which mandates that “[t]he arrest, detention, or imprisonment of a child […] shall be used only as a measure of last resort.”

Chew noted that while minors are unlawfully arrested and interrogated, “soldiers […] have authority from the Israeli state to invade homes regularly, vandalize the contents, destroy food, terrorize children asleep in their beds and shoot them in the head. All this with absolute impunity.”

A report published by Breaking the Silence, a non governmental organization (NGO) run by former Israeli soldiers, mentioned the discretion given to soldiers to open-fire and identify targets, which led to massive casualties of unarmed Palestinians.

“It is the Israeli state declaring ‘we can do this to you and get away with it’,” said Chew.

This state-sponsored military campaign on Gaza operates in areas which are legally under Palestinian authority. Most of the attacks perpetuate the persecution of Palestinian children in villages within the West Bank.

The Palestinian West Bank is currently separated into three administrative divisions: Areas A, B, and C. Each division operates under varied levels of civil control by the Palestinian Authority (PA) and Israeli occupation forces. Areas A and B comprise respectively of only 18 and 22 percent of the West Bank, and are supposed to be administered under the PA. The remaining 60 per cent, Area C, is occupied by Israeli forces, and is considered to be illegally administered under international law. Nabi Saleh, the village where the Tamimi family resides, is part of the former division under PA control. However, the Israeli state maintains de facto authority and governance through raids conducted by Israeli soldiers to arrest and detain Palestinians. Chew stated that Palestinians under the occupation have the right to resist these actions.

*Anna, a Palestinian student present at the rally told the Daily in an interview, “International law grants Tamimi, and many other Palestinian activists placed under PA division control the right to legally resist the presence of Israeli soldiers […] on their land. It is important to distinguish ‘aggression’ from ‘legal resistance against colonialism.’”

According to the United Nations General Assembly Resolution 3314, the definition of aggression does not “prejudice the right to self-determination, freedom, and independence […] particularly [of] peoples under colonials and racist regimes […] nor the right of these peoples to struggle to that end and to seek and receive support.” Moreover, the UN has recognised the right for occupied populations to use legitimate armed force to see “liberation from colonial and foreign domination” in numerous occasions.

“The Israeli occupation of Palestine is illegal, and has always been colonial,” said Anna, referring to the Israeli state’s decision not to withdraw from Palestine in 1967 despite a unanimous decree of the UN Security Council to adopt Resolution 242, which called for the “withdrawal of Israel armed forces from territories occupied.”

Inaction from the international community

“As Western governments are supporting the Israeli occupation, what will become of us?” asked Ali. Ali claimed refugee status on arrival in Canada almost ten years ago, a status which has been denied despite being unable to return to Palestine due to the occupation. He subsequently applied for immigration status under humanitarian and compassionate grounds, but that however was too refused.

One of the speakers, Andrew Welsh pointed out that Canada currently does not recognize the existence of a Palestinian state.

“It is not a coincidence that in 2016, the Trudeau government passed a motion condemning the BDS [Boycott, Divestment, and Sanctions] movement,” said Welsh.

In February 2016, Canada’s Parliament passed a motion condemning the BDS movement, a grassroots movement seeking a peaceful resolution to the Israeli occupation.

“We need to be in solidarity, with those that are fed up,” said Welsh in French. “Fed up by the lies of the government, that claims to have no money to finance the creation of jobs, but has the money to build new weapons. Canada is going to increase its military budget by 70 percent. A part of this budget will go in the support of the Zionist occupation of Palestine.”

Anna explained in an interview to The Daily how the extent of apathy of Palestinian human rights is reflected in the international responses towards cases like Tamimi’s.

Anna stated that the content and amount of information, or lack thereof, published in Western news sources such as the New York Times and Newsweek further reflects the inaction of the international community.

She explained how, for example, Tamimi’s trial was postponed from January 31 to February 6 and finally to February 13, but “Western news sources have, for the most part, refrained from publishing the news of this postponement.” Anna illustrated her point by noting how an article published by the New York Times (NYT) on February 4 regarding the change of date of the trial was taken down.

In an article published in December 22, 2017, the NYT included the perspectives of several Israeli figures, such as Yossi Klein Halevi, a senior fellow at the Shalom Hartman Institute, a Jewish research and education institute, who stated that “when you see yourself as under permanent siege, your greatest fear is the loss of deterrence.” However, Anna told the Daily that this statement does not reflect the experiences of Palestinians because “Israeli occupation forces control the movement of Palestinians from Gaza and the West Bank, and Palestinians are thus the people under siege.”

“For those of us living at a great physical distance from Palestine where we don’t experience the heel of a military boot on our necks,” stated Chew, “it might have seemed that things were relatively quiet, relatively peaceful but the […] [Israeli airstrikes] on Gaza just a few hours ago are a reminder that this is a state of continuing war and civilians including children are the targets.”

On the day of the rally, the Israeli military carried out multiple strikes overnight in the Gaza strip, killing two Palestinians in an Israeli tank fire. The same day, two Palestinian teenagers were killed near Rafah, the southern region of the border, for approaching the border in an allegedly “suspicious manner.”

“We need to make people aware that even when Palestine drops out of the news for us over here, Palestinian people have to live the daily indignities of occupation,” continued Chew.
“You are the ones who have to stand for the Palestinians,” continued Ali, echoing Chew’s words and stressing the importance of international solidarity. “Because even Palestine’s children no longer trust in these [Western] governments.”

“Palestine’s children only call for the people, those who are free all over the world,” said Chew, quoting resistance movements such as “Boycott, Divestment, and Sanctions (BDS),” which have been “called for by the people of Palestine.”

“We need to make people aware that even when Palestine drops out of the news for us over here, Palestinian people have to live the daily indignities of occupation”

BDS was formally nominated for the a Nobel Peace Prize by the Norwegian parliamentarian Bjornar Moxnes, backed by the support of his party, the Rødt (Red) Party. BDS is currently active in Montreal among other resistance groups such as Tadamon, an organization in support of Palestinian human rights.

“We must continue the pressure, there is an end in sight. […] Ahed, we send you our love and deepest solidarity,” concluded Chew.