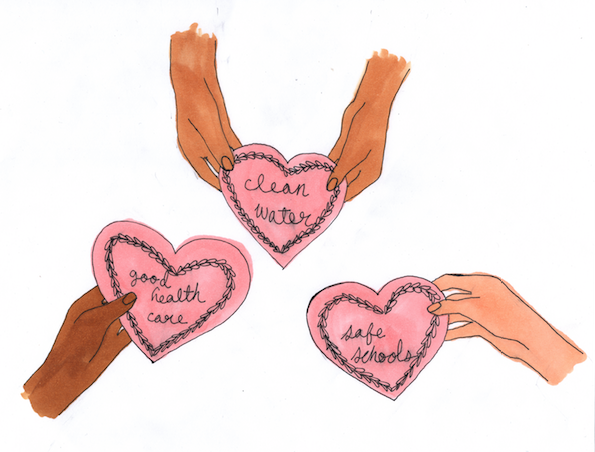 On February 14, for Valentine’s day, Have a Heart Day McGill took place in Chancellor Day Hall. This reconciliation event consisted of a Valentine card writing campaign, presentations, and a panel discussion. It was organized by students, in collaboration with the First Nations Child and Family Caring Society (the Caring Society). The purpose of the letter writing campaign at McGill was to send a message to Parliament in support of Indigenous children’s rights to education, health, and identity in Canada.

Have a Heart Day sought to bring awareness to McGill students on the contemporary nature of Indigenous issues.

Speakers at the event included Dr. Cindy Blackstock, the Executive Director of the Caring Society, Alanis Obomsawin, a member of the Abenaki Nation and one of Canada’s prominent documentary filmmakers, Dr. Samir Shaheen-Hussain, a social-activist, Stephen Agluvak Puskas, the co-founder and former producer of Nipivut, Montreal’s Inuit community radio show and representatives from the McGill Law Aboriginal Human Rights Initiative.

Obomsawin’s wore red clothing as a symbol of support for missing and murdered Indigenous women.. She explained: “I am wearing everything in the colour red to acknowledge the missing and murdered indigenous women in Canada.” Her groundbreaking work in the field of Indigenous and feminist filmmaking, directing Christmas at the Moose Factory, Our People will be Healed, and most famously Kanehsatake: 270 Years of Resistance, has granted her the status of officer of the Order of Canada Governor General’s Awards in Visual and Media Arts Member of the Order of Canada.

Dr. Cindy Blackstock chooses not to label herself as a social worker, activist, or scholar, stating: “I don’t want my job to exist.” Her rationale is based on the belief that her position should not exist in the first place, as Canada should be able to properly provide for its Indigenous people without there needing to be a person like her advocating on the behalf of marginalized children. Blackstock, filed a complaint pursuant to the Canadian Human Rights Act [CHRA] on the basis that Canada discriminates against First Nations children by consistently under-funding child welfare on reserves. Her dedication led to her being placed under surveillance for “caring for First Nations children,” by the Indigenous and Northern Affairs Canada (INAC).

The tribunal ultimately concluded in 2016 that the Canadian Government discriminates against 163,000 First Nations children on the grounds of race and national and ethnic origin. Obamsawin worked to cover the process in her documentary We Can’t Make the Same Mistake Twice, which premiered with critical acclaim at the Toronto International Film Festival (TIFF).

Dr. Shaheen-Hussain currently works in the Pediatrics wing of McGill University Health Centre. He does research in Public Health, Pediatrics and Emergency Medicine. His current advocacy focuses on changing Quebec’s policy on medical evacuation flights, which does not allow for a caretaker of the patient to be present. This disproportionately affects Indigenous children, who are often airlifted from northern Quebec to hospitals in Montreal or in Quebec City.

After Dr. Shaheen-Hussain’s advocacy, along with leading Canadian pediatric associations at the Valentine’s Day event, the provincial government now says it will allow parents to accompany their children on medical evacuation flights.Dr. Shaheen-Hussain commented to the CBC that “[the change in policy] warrants cautious optimism, in the sense that our government lamentably has a history of broken promises to Indigenous communities. This very well may fit into that history as well.”