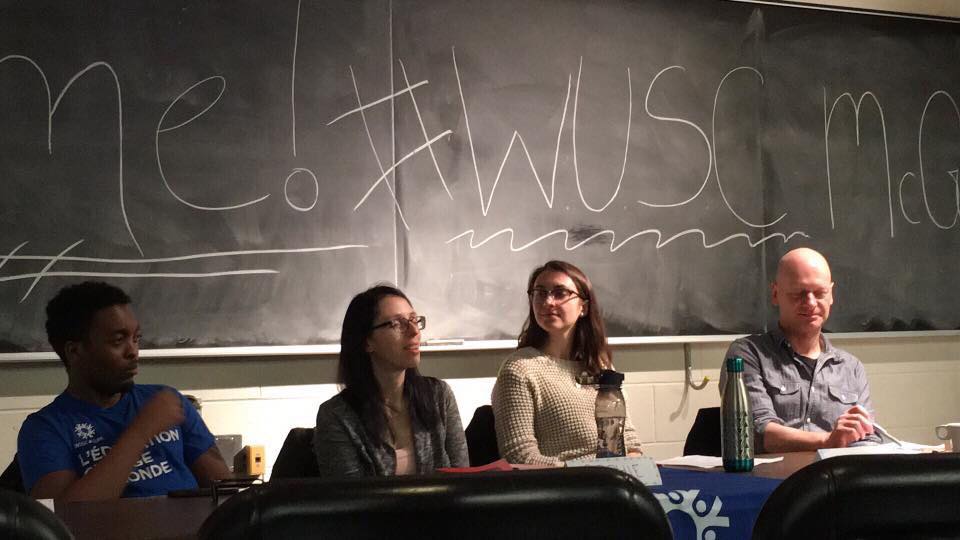 On February 7, WUSC (World University Service of Canada) McGill hosted an info-session on how to ethically volunteer abroad. The session involved discussions from a panel of five guest speakers, which included two McGill students, Vincent Yagayandi and Meagan MacKenzie, one member of staff, Antoine-Samuel Mauffette Alavo, and two other key speakers involved with volunteering overseas, Rodolphe Lasnes and Sophie St-Laurent.

Yagayandi, a second-year social work student, began the discussion by recounting his childhood in a refugee camp in Malawi. He described his first-hand experience with volunteers who oftentimes came to the country with “good intentions,” but approached their experience in a way that does not take into account their “positionality”.

“When you are going there as a white person, you have power,” he said.

Yagayandi mentioned the importance of being mindful of such power dynamics when asking for consent from a local community member. “Now, if you ask a kid, ‘can I take your photo’?, they are not going to say ‘no’, they are going to say ‘yes'”.

“But do they actually mean the ‘yes’? […] Check consent vis a vis [their] positionality and power,” in order to respect the community they are working in.

“But do they actually mean the ‘yes’? […] Check consent vis a vis positionality and power.”

Yagayandi emphasized that people engaged in voluntourism (described as a form of tourism where travelers participate in volunteer work) should be aware that realistically, their short period of time overseas will not make a significant difference on the state of the country or its people.

“I was in a class once when someone gave a presentation saying, ‘I was in Kenya for four months, empowering people’, but […] how is this even possible? […] You empower people by knowing their strengths, but how do you know their strengths and expect to empower them in four months?”

Yagayandi stated that McGill should focus on ensuring that students are aware of the space they are occupying within the country they are touring, and the reality of their impact. In order for volunteers to recognize their place in a foreign community, they must acknowledge that they do not have the power to “empower” people in the community in a short period of time.

Yagayanandi described this rhetoric of “facilitating empowerment,” which requires volunteers to answer the question, “Did you actually empower people, or are you fitting the narrative?”

“Did you actually empower people, or are you fitting the narrative?”

Mackenzie, a fourth-year Sustainability, Science, and Society student, described how the “origins of international development [comes] from colonialism,” and how, “Development still focuses on western powers bringing change and development to its former colonies.”

Mackenzie discussed the inherent problem with language used by Western powers such as “developed or developing” when referring to countries overseas. She mentioned that such categories indicate that “Western superiority is still present”. Mackenzie noted that regions deemed as “developing” have been, “actively underdeveloped by the people who prospered”.

Mackenzie, like Yagayandi, also expounds on the importance of volunteers situating themselves and their experiences in the context of the community they are touring. “The biggest impact you can [have] is absorb[ing] what you learn and apply[ing] it… You are going to get infinitely more than you can give,” says Mackenzie.

She also mentioned the importance of working with organizations that focuses on local social enterprises or businesses.

Mackenzie spoke about the Kumvana program, which translates to, “unite so we may discuss and understand” in Chichewa, which, “facilitate[s] cross-cultural understanding and leadership understanding for…African… social entrepreneurs.” The Kumvana program is different from traditional fellowships because, “it actually brings people from the Global South to the Global North,” explained Mackenzie.

“The biggest impact you can [have] is absorb[ing] what you learn and apply[ing] it…you are going to get infinitely more than you can give,”

Lasnes, a member of the Tanzanian Tourist Board, recently spent three months in Tanzania with the organizations Village Monde and Uniterra working with local ethnic groups to help develop cultural tourism in the region. He spoke about how tourism can work as a development tool, but how it can also be harmful to the local economy, especially in the form of voluntourism.

People come to the country to see the “national parks,” for example, but oftentimes the guided tours are run by large companies from the United States or Europe, and the money does not stay in the country, which perpetuates the dominance of large corporations in foreign regions.

“A good tourist is better than a voluntourist,” concluded Lasnes.

“A good tourist is better than a voluntourist.”